A colorful decision-based shooter
Submitted by IEP_Esy — 1 hour, 27 minutes before the deadline
Add to collection 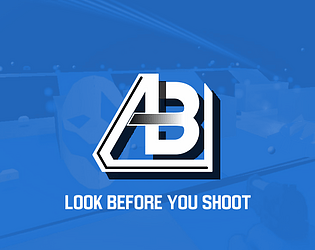 If you have implemented the modifier, how have you done so?
This game has a doom-like first person shooting style and the interface also reflects a retro theme.

Any additional information for voters?
In Abnormal, the goal isn’t to just kill anything you see in front of you; but to look and recognize if an enemy is attacking you or it’s just a friend trying to hug you! Be sure to visit the game page for more info!

I like the idea of the constantly changing floor tiles and the distinguishing between friend and foe ideas, and the youtuber in the corner was a cherry on top.

On the gameplay side I think this game would've definitely benefited from a jump button (I know this is basically a mod for another game but just food for thought) so that you can choose between being mobile and getting/losing points or staying on top of the blocks and just waiting for enemies to come to you but get no points or pickups. However since this is the So Bad Its Good jam, the absence of jumping is perfectly fine.

I like the idea of the constantly changing floor tiles and the distinguishing between friend and foe ideas, and the youtuber in the corner was a cherry on top.

On the gameplay side I think this game would've definitely benefited from a jump button (I know this is basically a mod for another game but just food for thought) so that you can choose between being mobile and getting/losing points or staying on top of the blocks and just waiting for enemies to come to you but get no points or pickups. However since this is the So Bad Its Good jam, the absence of jumping is perfectly fine.

I liked it a lot!  This really captures the "So bad it's good" theme of the jam. The Lets Player in the corner was my favorite part. :)

Hey huvarda; I'm so glad that you noticed this game I made! Happy to hear that you liked it and the Let's Player. It was an idea of 'Having your game commentated before someone else does it '. It also keeps a tradition of live action videos of the original game, Cute Adblocker, which this game is a mod of.

Your comment gave me hope and energy. Thank you!

I liked the overblown style of all the neon colours and the little YouTube-y window, the letters going missing, etc.. The music was fun, there's a nice Dark Souls reference and a hidden text in the spawn room.

The gameplay itself confused me a bit, without jumping it seemed impossible (or, at the very least, really hard) to me to both stay alive and not touch a red floor. But maybe I'm just too bad at the game! (Is there jumping? I didn't find it in the help if it's there)

I overall liked it in terms of visuals and audio, but I think I would have had more fun if it was a level with a goal instead of just shooting (ha) for a high score! That said, I still had fun, and I liked the enemies (or friends) spinning at high speeds off into the distance.

I'm really happy you played my game! Abnormal don't have jump because it's a mod of Cute Adblocker, a game where the player is prisoned by a evil advertisement company and made him physically challenged, and another reason is me avoiding possible bugs or making the game more 'simple' by not having to worry the player about crouching, switching weapons, grenades and everything else; in this case, the only thing player has focus on it's one gun and its ammo.

If you liked the overall concept of this game and want a continuing story, I think you'll like the original game Abnormal came from; Cute Adblocker has an actual story instead of shooting people! (like you said)

I've said this a lot in the description or in other comments; Abnormal is an unusual game where my older game elements mix together; think of it as a party where you see my games as guests ;)

Sounds like a fun concept for Abnormal! I'll give Cute Adblocker a try after I've gone through all the jam games here!

Hey! I played Cute Adblocker, both the HTML version (which seems to just be one room?), as well as the Windows version.

It has a nice style and I liked the ideas, especially the video feed on the monitors! I did not get too far, though, because the game is very hard to play. I personally feel like the player animations are all a little too slow, so I don't know how to survive the party room. Hitting the X as a "headshot" zone was a very nice idea, but I couldn't do it on moving ads with their insane speed!

Still, well done on it!

I'm very happy that you got to play Cute Adblocker! I always hated ads so much that I wanted to shoot them with a gun; so I made this game that anyone else who had this feeling would experience it too.

The PARTY room's trick is to ignore the ads in that room and run to the door on the right! I hope you get to see what happens in the end and how the story goes!

If I get enough attention on CAB, there might be a part 2 which It'll have better gameplay and  the story completes . Thanks for playing!

I gave it another try and made it through that room! The last (non-boss) level took me forever to beat because it was not very easy to learn how to tell the fake and real packs apart with how quickly everything moves, but I eventually managed to get through. The boss itself seems nearly impossible to beat without an exploit where I was standing on a car and impossible to reach for the enemies.

I like the concept and the ingame movies (especially the blooper reel at the end). However, I think the way the player character controls needs some improvements. The actions (walking, reloading, shooting) are all too slow for the speed with which the ads are coming at you, if you ask me. I think they should all be increased in speed, or the ads should move slower (or both, even, those movement patterns need some crazy twitch shots).

My assumption is that you wanted to make it so that it feels like popup ads assaulting you from everywhere, which kiiiind of works, but it unfortunately does not make the game more fun to play. This might be partially my subjective taste, though, as I generally prefer FPS with good player movement. It was an interesting experience either way, well done!

One final note: https://prnt.sc/p98zl0 I am not sure how to feel about this little Easter Egg here :S

I'm glad you've made it! I'll consider your suggestions in the next game; thanks for playing!

Edit: Remember that the institute which imprisoned Shayan are very bad and evil :)))

It would be better if you post your ideas to the =Ideas= section of the game's community too...

This is one of those games where I think it was done well but I just didn't like it all that much*. I'm not personally a fan of games where the only objective is score. I like my shooters simple; with constant spawns, the floor changing color, being able to fall off the map, and some enemies actually friendly there was just too much going on at once for me.

I don't know if it was actually happening or just seemed to be happening, but I thought some enemies were changing from green (friendly) to red (evil). After a while I gave up on trying to get a high score and just killed everything that might be a threat.

I think you gave the retro theme a good shot, but it just doesn't feel right to me. The biggest problem is that I'm not sure which period you're going for. The HUD tries to be 8-bit (although the drop shadow kinda breaks the illusion), the weapon sprites are mid 90s, and the 3D enemies and environments are late 90s-early 2000s. The company logo/intro is firmly New Tens and the main menu is mid-late 2000s.

I'm also not sure what's up with the streamer in the corner. I feel like it's a joke that I almost, but don't quite, get.

It's really, really hard for me to rate this one. I think it actually is a strong entry, but it didn't really click for me.

* You stand in good company at least; I put Undertale, The Witcher 3, and GTA V in this category.

Thanks for putting time for writing this review. I'm really glad that you noticed this game I made.

As I mentioned in the description Abnormal is more like a mod of my older game and it is actually a game where my other games elements are mixed together with a new gameplay and crazy art style (as you said, it doesn't apply to one period).

I do know that my games are a bit (or a lot) harder than usual games, though the reason for this game is mostly because of the randomizable game play (I'm guessing you've played less than ten times or you're not very lucky) every game try has a unique difficulty, and based on players' skills, this can be a tool to get score in hard times, or grind in easier game plays. However, I might lower the difficulty in the next updates for Abnormal just like I did with my other games.

You noticed right! The enemies convert during the game and that's a part of gameplay.

The reason I put a funky streamer was to keep a tradition of having live action videos like the original game which this game is a mod of (see Cute adblocker), and to bring out a new idea of "getting your game commented before someone else does it".

I really appreciate your personal opinions, and if you think that this game is bad but in the meanwhile is good; doesn't that mean that it perfectly fits this jam's purpose? :)

The perspective of badness in games doesn't have to be a game with horrible art, poor gameplay or earrape. Sometimes it can be a heavy dose of fun which some people just can't take in one play! And I know, that's abnormal for a game.

I don't know if I really found it too hard so much as just overwhelming in general. I think it was done deliberately, and I think it works for this jam, but I couldn't play it more than a couple times.

I've never played Cute Adblocker or any of your other previous games. That's probably why there were a few things where I felt were a reference to something but I didn't get.

To be clear, I think this was a good entry. I think it really does hit the mark on being "so bad it's good". It just wasn't really my thing.