Pay your them in coin, your mark, and a taste of eternal life
Submitted by JetGet — 1 hour, 6 minutes before the deadline
Add to collection 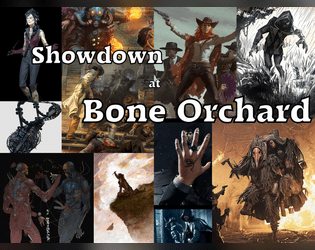 Kinda late commenting on this but I've got to add that I played this with my little brother (And while he is into miniatures and has been modeling for nearly a decade now he is not into any kind of tabletop games) and he loved it!

Now him and me are making up own bloodlines, gear, rules, scenarios and everything and having a lot of fun!! :) The game is just perfect for him. Quick, fun, no long rule introduction, no long tedious note taking and you can prolong the game by just going for a reshuffle. Just. 10/10 for a game made in such a short time.

In my opinion this game is a total success! at least it got us two brothers to have a lot of fun and that is a success in my book :P

Truly, nothing could make me happier than to hear that :)

This is definitely Malifaux inspired as it has no dice (which I love), but the army creation system is a great breath of fresh air (at least for me) as it adds /yourdudes/ element to the fantastic system and I think the victory condition is great as well - especially with 2 scenarios, games actually went quick and simple. Bravo!

A few questions:
- I see that at the end of each turn, drawing 5 cards is mandatory, so people can have more than 7 cards in their hands? Is it intentional, hence people are not incentivized to assign less cards so they can keep their decks longer?
- I'm a bit confused on the Shambling Advance of the Harvest scenario: if they move as if they're assigned a King (which is valued 13, IIRC), why do they only move 8 inches? Or is it simply for priority purposes?

hey there! Yes it’s hard to avoid Malifaux comparisons with a deck of cards. Not at all a bad thing :)

Glad you thought things went well! We aimed for speed.

The drawing cards IS mandatory. Wish we had more space! It’s to make sure you’re assigning cards if at all possible, keep players from just using one model, and provide plentiful cards for abilities.

They only move 8 because we felt that 13 was too far! Subjective though.

I think I love everything.
I really really have to try out card based miniature games sometime, they appeal to me so much!

I find very clever how your miniatures don't really die, instead emptying your deck. The milling dual purpose mechanic seems to work nicely.

It's also very elegant how you don't have stats at all, just actions triggered by the cards which in turn are used for everything.

One thing that I feel is broken: Pupeteer+Desecration

I have to ask, since I haven't played it and don't know it at all. How much of this stuff is from Malifaux? Iirc Malifaux still has the typical "2 actions per miniature per turn, moving etc" and only showing cards from the deck whenever you made an action, sometimes having to make sums and compare between two cards etc etc. This game seems much much faster to play

Did you think about making the assigned cards have a specific suit or color?  I'm wondering the pros and cons.

Thank you so much, that means a lot to me! We put a lot of work and testing into this one 😃

Having played lots of the other One Page games, I liked how a lot of units didn't have many stats to worry about, just a Quality number. It was fun to do something similar for this. Buying things like extra HP or abilities, sure, but not things like "weapon skill". Instead, it's always a choice as to when a unit acts and how well they do.

Puppeteer + Desecration is probably bad! The only upside is that only one hunter can take it, and you can keep killing that hunter over and over and over. If I'd had another pass, it would have been smart to have something else there.

There's both a lot of Malifaux and also not that much. Lots of games have the "take one or two actions" mechanic, from D&D to Dust 1947 to Imperial Assault, and Malifaux is one of them. It's easy and convenient.

Malifaux's resolution mechanic is similar but with a lot more variance. You don't assign cards. Instead, in Malifaux, anytime you take an action, you just flip the top card of your deck face-up instead of attempting to roll dice, and then you can choose to spend cards from your hand.

In Bone Orchard you just spend cards directly from your hand. So yeah, a bit faster.

There were thougths about more color abilities, but as the deadline was closing in and we'd played around with the core a bunch, we didn't really have time to have a lot more abilities. Red and black and more suit-based abilities would have been excellent, with the exception that it kind of sucks to need a suit/card that only shows up 25% or 50% of the time.

The "dual purpose design" we came up with was the use of the deck of cards to do two main things: