Reflector is an FPS with unique combat mechanics
Submitted by Matthewpalaje — 9 hours, 46 minutes before the deadline
Add to collection 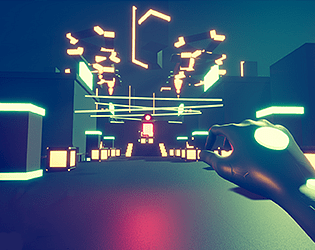 It lagged so much, now as it is released, can you make a good update.
Till reading it took 6 days to make, I though that I became better at game developing than Mathew Palaje, the person who taught me to Change player in UE4. LOL. sORRY

You really need to add a pause menu. I have to use Ctrl-Alt-Delete to exit.

Most game jam games don't have menus haha. In total I only worked 6 days to create this.

I really like it! I love the art style, the mechanics are interesting, and with a little more fleshing out and polish I think this would be great!

Just a few things that you may want to consider going forward:

Obviously this was for a game jam, and I think you did a good job with the project in that month, and the little gripes I had with it are understandable, but I thought you'd like to hear about them for your future projects :)

Keep it up man! Looking forward to your next release!

LikeReply
MatthewpalajeDeveloper3 years ago(+1)
Thanks! :)

Thanks for all of the feedback!! I'm going to double check the build to make sure it's the latest one.

Although i couldn't figure out how to get to the end i still enjoyed it.

Reflecting the bullets felt great so that was done pretty well :DD

Submitted
Osira and the Temple of Light
LikeReply
MatthewpalajeDeveloper3 years ago

Thanks! You activate both buttons and then in the middle of the level the door for the main frame goes down. Then you can walk in and destroy it :)

Can somebody help me, I get  this error when i try to run the .exe file:

I can't download the game from the itch.io app. It says that it's not available on windows

Graphics are amazing, but the gameplay feels a bit clunky. At least I died a couple of times from random knock-backs and getting back to the fight every time takes a while.

Ah I see, I was holding up the mirror but got hit from behind, so I didn't anticipate the impact.