expand to the heavens
Submitted by KAJ7 — 8 hours, 7 minutes before the deadline
Add to collection 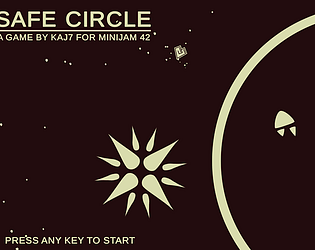 KAJ7, I love this game. It's so well done, good job man. I would like to see an objective put in it besides upgrading. I would definitely love to see a more developed version of this game! Alot of the feedback I thought of Jack mentioned, some solid advice down there in my opinion! Great entry!

Submitted
Lost in the Frost
LikeReply
KAJ7Developer1 year ago(+1)

Thanks! I will definitely try to expand on this more after the jam!

super cool idea! some feedback:
too many particle effects when you kill an enemy, it clutters up the screen and can be confusing. i think if they disappeared faster and moved faster it'd be a much more impactful effect, and not clutter the screen.

the camera felt a little static, maybe moving it based on the player's position and the mouse position, so you can move the mouse to see further. games like Nuclear Throne and Hotline Miami do this. also some screenshake would be nice.

it's possible to get stuck on the outside border. i was just riding around there and got stuck, wasn't able to turn or move out.

audio isn't great either, but it's still better than none. definitely need some rocket thrust sounds in there.

controls are fine, though it feels more like playing a top down shooter than a space shooter. i think Didolino has the right idea, try slowing down the acceleration/deceleration.

all that being said, there's still plenty to love about this game:
the concept is instant to grasp, which is vital for good arcade games. the core loop of going out, shooting bad guys and returning again can be really really fun.

the shop is a very welcome addition, i'm glad you included it. good polish too. all the upgrades make sense and there's really nothing to complain about here. well done!

the art is very clean and presentable. love the little spaceship sprite.

overall there's a lot of potential here and it's a great concept, would love to see you develop it further.

Thanks for all the feedback! I will try to implement as much of this that I can, and fix those bugs!

The game is cool! My friend spent about an hour trying to grow up the waarm circle to the size of outer cirlce. Is there a good end if one reaches such?)

Think, you should reaally handle optimization, i got game freezing pretty quickly. The more pickables i have on the level, the worse it goes.

wow, I’m glad your friend had so much fun! Sadly I didn’t have enough time to put in an ending or anything. But that’s a good idea for a future update!

The game plays nicely and smoothly, i like how clean everything looks and the thing that really adds to it is how all the resources in the game are finite. The only thing i'd change is making the controls more spacey by reducing the amount of slowdown. Good job man

thanks for playing! Might do that yeah, I changed the control scheme many times and so it might be better to have less drag now.

Artwork is great, love the mechanic of controlling the rocket. The feedback after getting hit by the enemy could be improved . Anyways great well polished game , enjoyed playing it. :D

thanks! Yeah I was thinking of maybe adding knockback so it’s not as easy to get stuck in front of an enemy.