A hard-boiled metroidvania. Shoot and draw your way through in a barely held-together world.
Submitted by Pablo Spada, BooT, FerPa (@Don_FerPa) — 3 minutes, 14 seconds before the deadline
Add to collection 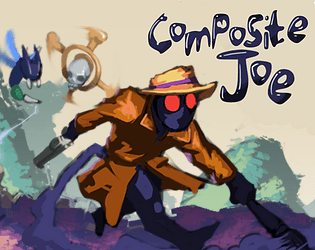 man, the game is very cool, some things need to be polished, but it's a lot of show. one of the best I've ever played this game jam.congratulations!

Nice game, love the art style and the animations, great mechanics ideas, for me it was a little to hard to fire, some time I cannot fire pistol I don't know if is a cold down to shoot again, and the shotgun was really hard to shoot with the mouse, considering the double click to shoot it. overall really nice entry

As of this writing, I have yet to finish the game, but I think I'm pretty far (btw, I like that the continue option implements the block mechanic). Anyway...

he level layout was also straightforward and easily understandable, even when I had to backtrack I had a fairly good idea of where I was going because I had noted the obstacles and power-ups on the initial journey (primarily the two gun upgrades, but also the upgrade that gave me the Line ability).

I also appreciated that you locked the door in the room with the Boost ability, there's no way I would have figured out how to use that if I hadn't been stuck in that room.

Finally, although super situational, the minigun was super satisfying to use.

Some things to consider:

1. I found the movement a bit stiff and felt a little bit unconfident about my own jumping abilities. This led me to approaching a lot of jumps hesitantly rather than at breakneck speed. I don't know if this was your intention or not, but it slowed down the pacing quite a bit.

2. I liked the variety of enemies, their telegraphs, and some of the situations you put me in were pretty cool (like the room with 4 cannons), but at the same time I was often attacked by enemies which were off-screen (particularly the cannons and the rock spitting guys, but  I also got nailed by an off-screen bee once too). This is something I struggled with in my game as well, especially on the couple of vertical sections.

3. The screen boundaries felt a bit inconsistent, I could never tell if I was going to go off screen or not by walking a few steps backwards. This cropped up in a few rooms where you spawn in very close to enemies, I'd want to get defensive and end up running back into the previous room even though I felt like I was fully within the bounds of the previous room.

4. Small thing, but I couldn't tell if the shotgun was doing anything or not? The guns having some SFX attached to them would have helped immensely with feedback.

But yeah, overall a super cool concept and I'm hoping that I can go back and finish it later today. The section I'm at is pretty difficult so I had to take a breather, but I know I can pass it. Overall great job!

Thanks for your feedback and we love that you are enjoying the game :) Definetely if we had some time, jump polish would be one of our priorities, I totally agree with your point 1, would have made a more confident and fast pacing ^^

OMG I love your art so much great amazing job!

The theme fits really well, I was also making my own sounds when shooting (the visuals of shooting are really good)

The jump feels odd, like you have too much gravity, if you changed that I would enjoy it more. The only other thing that annoyed me was that I got send back to the wrong save point and had to redo a bunch of platforming (minor)

I really like the art style and the mechanics at play here. I think the game in general needs some more polishing, espescially the movement system

I like the originality of you powerup system, balancing something like letting player draw their own platforms can be pretty hard to do with how exploitable it can be :p

Spritework and animations are really well made.

Music is nice, just too bad there are no sound effects to complement the package :(

If i had to nitpick i'd say the jumps can be a bit too floaty at times especially when you have to be precise.

Other than that it's solid, you guys did great :)

The drawing idea is really amazing! I like the experience that I can create part of the map. Also the animation is smooth. I think your idea is one of the best in this jam :D  Very creative!

I quite liked the game and the idea, especially the mechanics of defending yourself with the block and boosting your bullets with the blue vortex. There have been times when the game was quite difficult but I still liked it because you had to at least defend yourself with the block to be able to continue. My only problem is that at certain times it seems like the input or character states won't work right, but I'm sure they are fixing those little problems.

I really liked the idea of creating blocks and portals that would speed up your projectile to break certain walls. Despite missing any sfx, I could tell when I was dealing damage or getting hurt. I think that the jump speed and gravity need a little tweaking. And an in-game options/quit game menu would be nice to have. I did like the art and the music. My only problem with the music is that changing rooms would restart it instead of it continuing to play through scene switches.

Congrats on your work and submitting to the jam!

Submitted
Trial of the Alchemist
LikeReply
Pablo SpadaDeveloper323 days ago

We are happy to hear that you enjoyed the game ^^ Thanks for your feedback Dan!

Cool game! Nice menu, but I felt right away that I would suffer from the jumping/deceleration mechanics.

Also had some problems with jump sometimes stopped working, and weapon 2 often never fired anything? Also I don't like it that stuff from other rooms can shoot me.

Cool upgrades! Music fits the game well! It got a little too hard for me though, so I couldn't finish it.

We love that you liked the game.

Now we are fixing some bugs from the game, so you can try it again!!!

We also added more info in the game and in the game page. (info like how some weapons work)

Thanks for your feedback, we really appreciate it! We are already fixing some of these issues, so stay tuned :)