A simple click and result magical girl maker.
Submitted by CreativaGS — 27 days, 11 hours before the deadline
Add to collection 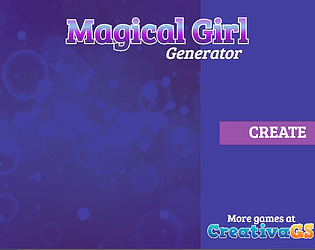 How does your game fit the Magical Girl Genre?
It's a tool to create girls with special powers.

Which theme(s) do you pick?
Uncertainty

How does your game fit the theme(s)?
Randomize the appareance and personality of the girl

some of them we made them before the jam

after I joined the jam but before the themes were revealed

Not really a "game," but an interesting concept nonetheless.

I'm not sure why it's "zodiacal sign" and not "zodiac sign;" I'm guessing English is not the dev's primary language?

Possible improvements include a random pool of names and the ability to designate specific features of the character.

Indeed. English is not my primary language and i had not the chance to recheck the spell and perhaps grammar.

I'm making a list of improvements i think a pool of names it's a good idea.

Also somebody suggested the ability to make changes after the girl is randomized and i think it could be a great idea too.

I don't know if this is what you meant by "designate specific features".

Its a good Magical Girl randomizer game and it could do more as a game of its own rather than just a simple utility for assisting in creating ideas/concept with regards to the character design and personality. Commendable for providing a utility to game developers who may be struggling for ideas while releasing it early in the game jam period.

Mechanics: The mechanics are simple and does keep the random Magical Girl design and description fresh with each randomization. It has been noted by the developer the photo saving button does not work on the WebGL version. Besides that, no notable bugs, issues, or surprises during the use of the random button.

Visual: I really like the art style for the Magical Girl since its really cute and has a touch of sex appeal to it. The art pieces for each article of hair, clothing and accessory is made consistent and are a good match with the base body template. There is also a good selection of color composition and variation even with the randomness.

UI: Layout is straightforward and clean. Its easy to start the game and get to randomizing the Magical Girl.

Audio: No audio present during the game play even when it is mentioned that audio assets are made during the game jam. Could use at least a stock looping BG music just to break the silence or correlate the personality with the music track.

Theme: The game definitely fulfills the main theme for Magical Girl. The Uncertainty theme is picked which is reasonable for a game about randomizing a Magical Girl's design and personality. However, the idea of uncertainty isn't long lasting since the design comes from a sizable collection which after a long while players will notice the same article of clothes/accessory being repeated so the intensity of uncertainty gets mellowed over time.

Challenge / Engagement: The game is fun and engaging with each random output while guessing what the next design/personality would be. Though. over time the description and design will feels normalized which is expected in a game that randomizes from a sizable collection of art pieces and color changes.

Originality / Creativity: In terms of the mechanics being used, the random generation is by far nothing original. However, the mix and match of different pieces of the Magical Girl and number of possible combination is original in its own accord. The character design/description is unique and creative which I really like while I notice some fun words being use in the "Likes", which can be a little adult oriented (^_<)～☆.

Story: Some story from the random personality but nothing more.

Overall: The developer has put in quite an effort into making the game, in terms of the art, UI, and coding because it feels polished for a game jam game. I think there is more that can be done, like transforming animations, BG music, different body poses, a pinch of character story, and maybe even a dress up option. However, since the goal of the developer is to design a game that helps others come up with ideas for a Magical Girl, I would say it has definitely fulfilled its purpose.

Thank you for your great analysis.

I really apreciate how you did it point by point and it will help to improve future projects.

Now i'm really interested in doing animations for the girls to transform, i don't know yet how to solve it, also the background music is a feature that will give a plus, but i think that part should be harder because i don't make music and i think each theme should fit with the randomized girl´s personality, but it's a wonderful idea too.

By the way I loved your game, it's too polished and fun to play sometimes hard, but really enjoyable.

Hi CreativeGS, thank you for the reply and for checking out my game.

I'm glad my feedback can help improve your current and even future games. Do keep improving not only on the game but your skill sets as well. I'm sure with effort and motivation you will be able to animate and even compose tunes for your games, eventually creating a wonderful game in the process.

So good luck, all the best, and have fun learning and creating as much as you can.

It's a cute little app to play with, nice work! If you were to updated it, it'd be cool if there was a mode/option to take your randomized girl, and manually select hair, skin color, outfits, etc. Basically start with a seed, and then customize from there.

Sounds like a good adition, and it will be not so hard to implement.

It's a nice little toy. I'd have appreciated a few more face shapes, perhaps, but otherwise it does its job well.

I wanted to make more graphics, faces, hair styles and weapons, and i hope i have the time to do it.

Thank you for playing it.