A small game about rolling around in a procedurally generated dungeon and dashing into enemies.
Submitted by svntax (@svntax) — 13 minutes, 59 seconds before the deadline
Add to collection 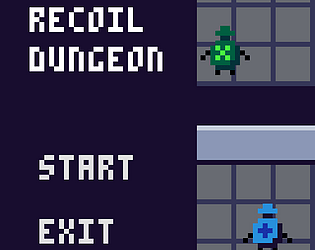 Was the resolution a challenge?
The resolution was definitely a challenge. For example, the enemies in the game needed to have a small enough detection area so the player isn't attacked when they're off-screen. UI space is also limited, so we show the player's hp only and a minimap that can be toggled on/off.

What did you learn?
I ended up implementing Zelda-style procedural dungeon generation for the first time, which was a fun challenge. By learning about this type of procgen, I can now reuse that knowledge in future games that may use a similar style of content.

Really liked the uniqueness of this. The procedural generation fits it well too, gives a lot of replay value. Very enjoyable, especially with that chill music.

Submitted
A Prelude to an Adventure
LikeReply
RsburkeSubmitted1 year ago

This is such a unique approach to dungeon crawling. While the game doesn't perfectly conform to the 64x64 pixel resolution the jam requested, I actually think it benefits from the smooth camera movements and ball movements. It's pretty challenging, and I'll definitely be playing more when I have the time!

Lovely idea, great execution. I found it a bit too challenging but I suck at pool so that's no reflection on your brilliant game.

The bumping-into-enemies mechanic is not used enough in video games, and coupling it with procedural generated dungeons was a cool idea. Love the sprite art on the enemies too!

I just wish there was a way to do keyboard or gamepad control. I think it would quicken the pacing.