Shift some bits around and match the decimal numbers
Submitted by nhydock (@nhydock) — 6 days, 19 hours before the deadline
Add to collection 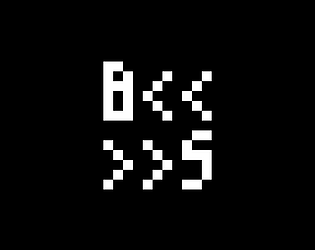 Really nice concept. Could be expanded a lot too, like building multiple masks that have some given operation done on them, and ultimately you have to reach a certain final result. Would be a great learning tool for devs who don't practice these concepts, heh!

I really like the "bit shifting" concept for a game, it is nicely done! Good Job!

I like the idea of this game (or what I think it is)... but there are a few issues. First, there's no penalty to just constantly clicking the left arrow. Eventually, the bits will match the target value without ever having to pop anything from the stack. Second, the game doesn't end once you've used up all of your stack pops... again, further proving the first point. Lastly... is there a "quit" key? Sure, I can press the "x" on the window, but I'm generally a believer that the application, itself, should have a "quit" command built in. To be fair, I'm a Linux user using a tiled window manager, so I don't have the floating windows.

All that said, the layout for the game was pretty good, clean, and easy enough to understand.

Thanks for giving the game a shot!  I didn't spend a lot of time on it, resulting in a puzzle game that's just a zen mode.  If I were to go back and spend some more time on it I'd just add in a time mechanic so you need to solve each puzzle in a limited number of seconds.  That way there is a way to lose, and it becomes a matter of seeing how far you can get.

As for a quit key, games exported by Godot usually have the standard Alt-F4 way of quitting built in.  Works that way on windows, should on linux as well.