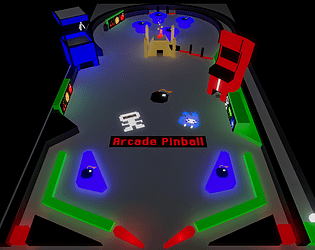 What INSPIRED this game?
Do you like a pinball games, but do you like a pinball in arcade style. well, this is the game for you.
Arcade is my inspiration because it is small and easy to understand also All games stared small before they become big. Also a good friend of my got a small Arcade hall, and have seen a lot of arcade cabinets. also, he fixed them to give them a second life as well.
this is the reason that inspires me.

List the parts of your game you or your team did NOT make. (Pre-existing assets or downloaded content)
Pinball Spring Kevin MacLeod (incompetech.com)
Licensed under Creative Commons: By Attribution 3.0 License
http://creativecommons.org/licenses/by/3.0

The Scarecrow2 years ago(+1)

Music by Kevin MacLeod was a great choice (we did this choice as well). I loved the game overall and the only thing i could see making this experience twice the fun is some flashy colors (like Dashing Ashes pointed out) XD.

Otherwise, I read the comments and many of my feelings were already adressed, a little bit of extra time and I'm sure this would be golden. Amazing game, bro!!

ah I loved it! It works really well for something made in a weekend, well done. And the sound effects and music were great - they actually didn't get too annoying, which is usually an issue in jams ;) like other people have mentioned, there are a couple of layout issues that could be fixed with more testing, but that isn't usually possible in 48 hours :) the one thing I will say though is that the ball doesn't bounce even nearly as much as I expected it to - a lot of the times it should have bounced a bit, it just lost all momentum. Overall though, a great callback to the old pinball machines - I used to spend hours on them, and with a bit of tweaking I could spend hours on this too!

I think I should try real ones first next time :D
thanks for your feedback

The game works incredibly well for having been made in a weekend. In terms of the actual layout of the pinball table itself though, there are definitely some problems. Things are placed just right so that the ball ends up right between the paddles way too often. For example, if you charge the launcher all the way up, it'll bounce around for a while and then just fall straight down the middle. If you bounce the ball ever so slightly off the top of the left wall, it goes straight down the middle. And the red/green gate things that I guess you're supposed to toggle 3 of to get a bonus or something, they never seem to really stick. No matter how many times I tried, I would toggle one to green, then it would drop right back down and toggle it to red. They should just stay on green I think. Also, the paddles protrude from the rail just a little too much at the fat end. Either that, or perhaps they are just visually misleading. I had a ball hit that round end hard, and I assumed it would bounce over into the rail, but instead, it just plopped right down into the middle for some odd reason. Basically, the core functionality of the game works incredibly well for a game jam submission, but the actual balance of the pinball table itself could use some adjustment.

Hey Slug Overdose thanks for your feedback.

I am currently working on some adjustment for the game make it more balance.
some of the bug you reported are in the work to be fixed. also i want to make the board more balanced for more players.
I also going to change the flippers model that ball will translate over and not being stuck between them.  as well the physics gets a clean up.
so I have a ton of things to do before I can upload. beside that i can't upload a new version after the Jam is over :( (Yhea it sucks)

Nice pinball arcade. The only thing that's lacking is lots of fleshy colors when you hit things. :)

Not bad for just a few days of work, I'd keep working on this to see where you can take the overall idea. Not a lot of pinball games available out there. Have fun.

thank you. I am currently working on some fixes. and I want to up the game play a bit for more enjoyment.

Perhaps looking at how the ball bounces off the flippers. There were times it seems I would just catch the ball and the velocity suggested it should bounce away instead.

WOW! Super fun!!! Can play this all day long.

It works impressively well! You got a lot of pinball features in there; there's a ton of potential to expand this.  Well done!

thank you. I will look If i can do it later this.