Sorry, but we have not uploaded the song by itself anywhere. I'm not sure if we even have the original file still 😅

Yes, it was composed by one of our teammates during the GameJam time.

Interesting concept! It took me a little bit of time to get comfortable with the way you controll the ship, but after that gameplay was very fun! I also love the comics you've drawn for intro and outro!😄

Great game! Your sound design and overall aesthetics of the game are so good, that I was spooked all the way through the game! I was also afraid that I'm gonna get a jumpscare when the monster would come closer, but thankfully you have not done that to me 😅

Very fun game! I love the art style, and the sound design is top-notch. It's sad that the music loop stops if you don't get your rage meter filled up, but that's not a big deal🙂

Interesting game! I'm not really good at bunny hopping, so for the most part I was moving around on a normal 600 speed, but it was still fun to jump around collecting some souls and some candy 🙂

I liked the graphics, all of the models look nice and cute. The gameplay was fun and quite challenging without being infuriating, which is great! The downloadable version crashes on my PC for some reason, maybe because of Windows 11. The browser version worked just fine until the level was overflowed with enemies, then the lags became problematic. But that's ok, because I would have died from so many enemies around me anyway 😄

Ahaha, that was great! 😄 We actually had a similar idea during our theme discussion, so I'm glad someone made that idea into a reality!

That was a nice little story! I really loved the graphics, especially the hand-drawn style of the intro and outro! The BGM was also very well done and helped to build the overall atmosphere of the game. Great job!

Very interesting concept! The gameplay felt quite clunky because characters got stuck on seemingly nothing all the time, but besides that, it was a fun game! Good job!

That was very atmospheric, I was on edge all the way through the game. The gameplay reminded me of my childhood when I was visiting Room Of Horrors attractions on carnivals. Great job!

Have not expected such a long jam game! 😅 Some of the last levels felt a little bit unfair, because you couldn't see where you falling, but besides that it was a fun platformer!

Thank you for your feedback! We are glad you've enjoyed the game!

And yeah, having more sound would have been great, but we ran out of time 😅

The game was fun, the graphics look cute and all of the sounds very nice and crisp! I like it! At first, I had a little bit of a problem with hitboxes, but when I figured which part of the shovel interacts with the zombies the game was fun and engaging. Good job!

When I joined the jam, I wanted to test out my "MMORPG-kit", that I've been working on throughout July, and make a multiplayer dungeon crawler. While browsing through the Famicase exhibition library in search of a fitting cover+game premise I found quite a few good options: Wolf Tower, Peach Pit, Legend of Sosarion, Alebrijes, Cross12. In the end, I've decided to pick Wolf Tower. I like the idea of exploring a creepy old castle, infested with all sorts of beasts and werewolves. 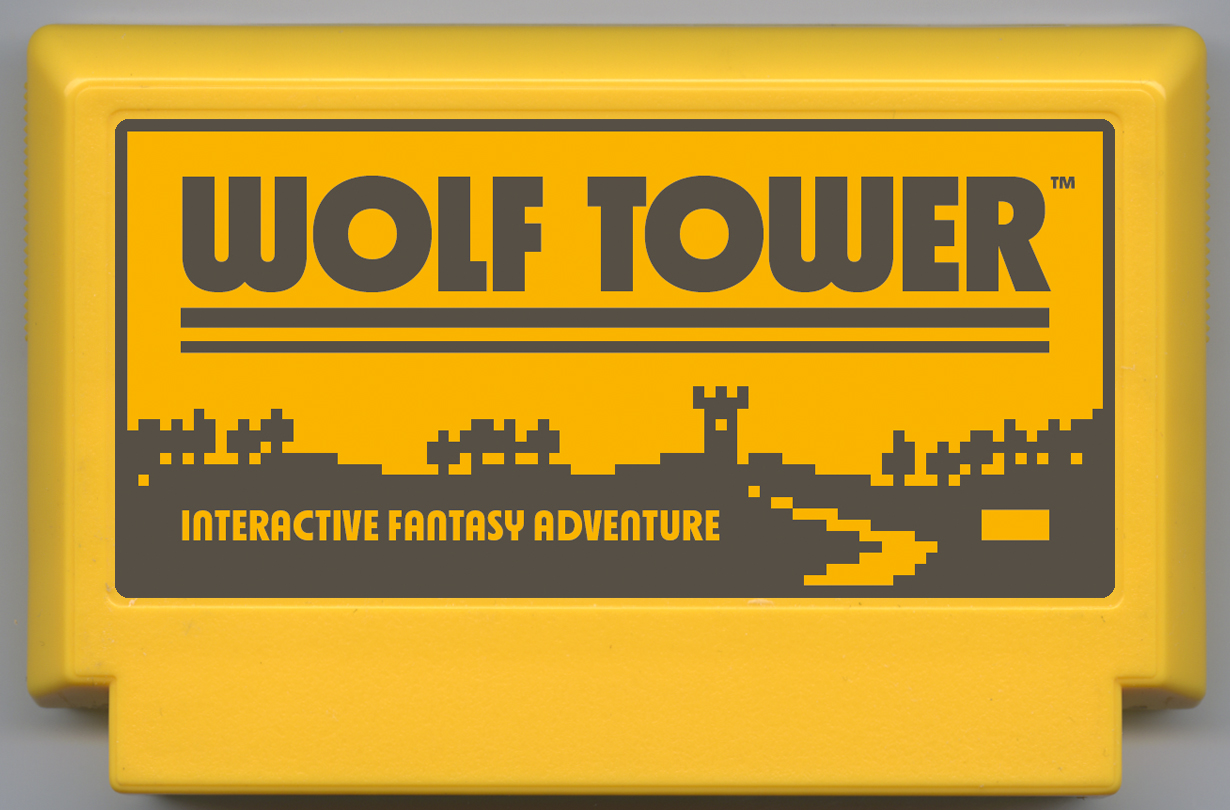 At the start you pick one of the three classes:

Every player starts the game in the initial hub-zone, which has an entrance to the castle, leader-board, and teleport to other hub-zones (if they were unlocked by other players).

The castle consists of different rooms, and their layout is generated when the world-server starts a new game. Players have a limited amount of time, to find a way to the main-boss room, unlock it and defeat the main-boss. To unlock the main-boss room players need to find and defeat 3 mini-bosses. After defeating each mini-boss, his room becomes a new hub-zone available for all players.

When exploring the castle players go through rooms, most of which are inhabited by enemies (beasts and werewolves). Some rooms have treasure chests with new gear. Upon death, the player loses his character and all of his items are scattered around the castle randomly.

So, after another 3 weeks of development I had most of the things needed to implement this idea:

During those 3 weeks, I've done all of the testings by myself. So, after playtesting the end result with my friends we quickly realized that the real-time style of gameplay was not fitting for this game. The server turned out to be quite slow in terms of response speed and the way game-client was implemented made the process of aiming your abilities very painful. Also, for some reason, the client suddenly became completely broken visually. It was made with Cocos Creator, which I've never used before.

Luckily for me, my friend liked the premise of the game and agreed to help me out with this mess of a project. We've decided to make the gameplay turn-based and rewrite the client using Unity.

Needles to say, we have not been able to recreate almost 2 months of work in just 2 weeks, but we've done most of the basics needed for playtesting and PVP (WOAH!). Also, the new client looks 10 times better visually.

I don't think we would be able to finish it until the extended deadline, but we are not planning to abandon this project. So, if you are interested keep an eye out for updates 😉

Thanks a lot for such a thorough review! 😄

A lot of the things, that are missing from the game come down to the lack of time. The game was made in 72hours during a Ludum Dare 48 game jam, and we have not updated it since. I agree that the endings felt low cluster and meaningless, and the gameplay can be improved in many ways.

Initially, we actually wanted to make so the room and your surroundings change as you go through the days. The "reports" mechanic also should have been a little bit more complicated. I was planning to give the player the ability to write an actual report by himself. But once again, we ran out of time, so none of those things were implemented 😔

As of today, I doubt that we would make an update for this game any time soon. But if we do come back to this project someday, we would consider your (and other people who gave us feedback) suggestions.

And I'm glad that you enjoyed the game, even in its current state. Thanks again for playing! 🙂

P.S. You can change the sensitivity in POSTJAM version. It's the only update we've made 😄Just press ESC when the game was started.

Thank you for playing!
What exactly you didn't like? The fact that the game has no real ending? Or the story in general?

Thank you for checking out our game!

Since this game gets a lot of attention, we would try and find some time to make at least a few endings.

Thank you for playing our game!

Yeah, we should place some info in the description that game just loops... Had no time to make proper ending.

Thank you for checking out our game!

Yeah, It's sad that there is no real ending to the game, but sadly it was a Game Jam and we ran out of time. There is one more character you can meet though.

Maybe we'll do an update in the future.

Thank you for checking out our game! Glad you liked it.

So yeah, there isn't anything like a mark or a grade after you carved a shape, there isn't really an ending condition at all. You just restart with a fresh log or close the game altogether when you feel like you got everything it has to offer.

On the other hand you might be experiencing a bug with a log completely disappearing right in the beginning - in that case I completely get your confusion, but I'm afraid we can't fix this technical issue at the moment.

Anyways thank you for playing and leaving a comment!

In the beginning we almost went for another much-much less technical game idea because we just couldn't figure out how we will do all the cutting stuff. But in the end one of my teammates got struck by a genius idea of doing pretty much all the cutting math in 2D. And as result here it is.
Thank you for playing and glad to hear the atmosphere we put into it worked for you!

Yeah, sadly some people report this issue with the game, but honestly speaking I have no idea what is it caused by. The code behind all the rendering and cutting stuff is so rushed that it's no wonder such problems occur. But thank you for leaving a comment about this. Maybe after the rating period ends I'll have an opportunity to fix this stuff.

Well, the code for all the raymarched rendering and volume cutting looks like it was written by monkeys dancing on a keyboard so no wonders this doesn't work for everyone. But thank you anyways for taking your time to try our game and leaving a comment.

You should've posted a screenshot of your magnificent horsey! But thank you for playing anyways.

Thank you for playing! Yeah, we kinda ran out of time and couldn't fully tweak the chainsaw movement mechanics.
As for the carving algorithm thank god it works! The raymarching code looks like hell and I kinda don't even want to place it all in order for future use. I guess I'll be cursing myself for this decision some time in the future :D

I suspect our 3d artist intentionally made these models impossible to carve out with the current chainsaw movement mechanics :D

Glad you've enjoyed our game! Yeah, this volume raymarching stuff was quite a mountain to climb... A mountain with a ton of graphical artifacts along the way. As for the music, there is nothing really to pay for, I just took a guitar and a harmonica and did an improv for a couple of minutes. There is even an incomming Discord message sound right in the middle of the track that we didn't bother to remove!
Anyways, I've posted a link for an OST download down in the comments on the game's page.

OST download link if you (for some reason) wish to listen to it outside the game:

Thank you for playing! Yeah, we had a lot of fun recording all the audiowork for this game with our mouths and musical instruments :)
Wish we had just a bit more time to fully tweak the chainsaw movements so it would be more convenient to control it at least when not cutting. But glad you enjoyed the carving experience in spite of that.

Very beautiful game! The art style and sound design are so great I was fully absorbed by it! I'm not sure I understood all of the stories, but that didn't matter that much, had a great time playing the game anyway.

Yeah... At first, I wanted to make a gender-neutral story, but my knowledge of English and writer skills are not good enough to accomplish that in a short period of Ludum Dare game jam.

Thank you so much for playing our game! Yeah, the eraser tool would have been great. Unfortunately, we had no time to implement it, and at this point, I highly doubt that we would get back to this project any time soon.

Thanks for playing our game! That tree looks very sexy 😄