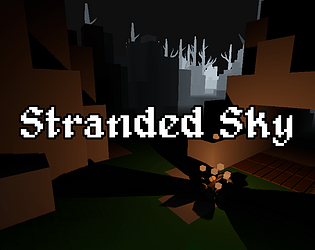 Theme Challenge!
OPEN-ENDED (no "win state" crafting game, which was and kinda still has a story emphasis on "do I play/survive one more day or canonically give up in the face of no rescue?")
CONSERVE (was aiming to have limited resources on the sky island and the requisite management and chance to wreck the ecology by chopping all the trees etc, didn't quite get that far xD)
BRANCHES / CURRENT / WIND were all things I wanted to weave in had I the time as "stretch goals". So they were an inspiring lot of themes, but pragmatism strikes again!

This is an interesting concept, and I'd like to learn more about voxels like how you did here. It is a little hard to tell if I have any items I can place down since the gui doesn't tell me anything, but you got the basics down which is what counts! :D

I've been looking to make a YouTube channel under "WeRideForCoffee" and was considering doing little videos on how I tackled the core elements behind each of my game jam entries, the theory behind it and how I "solved" it in Godot for a practical example, would that be something you'd find interesting?

Also sorry, I got the inventory and crafting windows ALMOST finished, which is why you don't have any items, even though the inventory technically could store and retrieve items.. I'll be uploading a patch tomorrow night when judging is over if you want to see how that would have worked.

This was an impressive tech demo. It was dissapointment not seeing many of the mechanics ussually present in voxel games. It was cool walking around and exploring, and the programic effects in general were nice.
Looking forward to seeing where this game goes in the future!

Believe me, I was the most disappointed that I didn't have time to add in the rest of the core mechanics inherent (gathering, crafting, even just *placing different voxels*) That's all in the Soon™️ patch, going to focus on some core underlying stuff tonight I think after I bake those versions out.

Also I think that rating *was* my rating, I'd already played it and rated it when I saw you talking about only having one rating on Discord, unless I'd snuck in a rating just after you'd checked it which is quite possible :P

Good job for making this in such a short time, even with the "obstacles" you got during the development! It's impressive.

Really impressed you manage to get this up and running so quickly, I'd love to see it developer further as I've always loved the concept of being stuck on a floating island and being forced to survive. Excellent work!

I've already got an update with all the basics I wanted in (hunger, crafting, placing and gathering blocks and structures) ready for as soon as the Jam Judging ends (and some fixes for weird bits like the lighting) and I'm definitely planning to poke away at this one over time!

Ideally I want a "campaign" mode (which is more or less the story as it stands now) and a "Sandbox" which is more of an old-school Minecraft survival or creative style world, either with a floating island or some other world types.

That last bit "might" take a while however so.. ':D

I'm very impressed that you could put together a minecraft prototype in 10 days. Well done :)

Thank you! <3
I could have finished the crafting too if it wasn't for loosing those few days to (admittedly) my really dumb attempt to multi-thread it so I could support a larger world size! It worked *most* of the time but I really didn't want to upload something that would just not spawn 1/100 chunks or crash 1/100 chunks either :P (I'm still salty, hush)

Fun fact: The Godot engine is getting a debugger that correctly returns crash reports from threads that aren't the main loop. In the *next* version xD