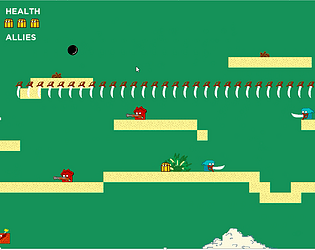 XenoneoSubmitted2 years ago
Making a team with enemy looks cool but the level design gets in its way.
Submitted
2 Worlds Onside
LikeReply
RikuyaDeveloper2 years ago(+1)

Yeah the level design definitely needs a lot of work.

Fun game. Great controls! Loved the friends mechanic. The level with the ship chasing you is kind of frustrating however, specially since you have to do it from the very beginning even after reaching the part with the mast (which is really difficult on its own)

The lack of sound also made the game lose some punch, but overall it is a solid prototype

I really do need to add checkpoints, sorry.  And as for that ship, yeah you're right it needs some work.

As for sound I didn't have enough time so I figured I'd rather focus on other things than add terrible sounds.

This has some tight controls. I didn't get real far, but for what I did play there wasn't a whole lot of reason to jump. I could just run across the bottom carrying a cannon dude. I dig his special. I was never able to pick up 3 different guys, tho I tried. It seemed to always remove one? I'm probably doing it wrong. Either way, there's no reason to ever pick up anyone other than the cannon dude. A little variation in their firing pattern would make this much more challenging. Either way the characters are really cool and I can see how a lot could be done with it

Really fun. I liked the characters a lot.

Hope to see the rest of the story.

The camera movements are nauseating. I couldn't play through even the first level.

I had fun with this, it was too short! I like the premise, I think the character stealing mechanic is cool. Would definitely like to see some music for this and eventually sound effects. Some type of limiter on your dash/steal ability would be good too, it made things way too easy... for example, running from the boat, I just dashed the entire way, would pick up enemies, and then usually get hit by something and just pick up a new enemy to replace it, so it made that whole chase very easy. Other than that, it seems like the sprite and character actions were facing opposite direction? So i would be walking, but it looks like the box is facing left - which also affected the bomb-drop ally, as it would drop a bomb the direction of the face which would be the direction I'm not moving towards.
Overall a good premise and enjoyable time, I would like to see this fleshed out more!

The premise of collecting enemies to give yourself a health bar is pretty neat! Almost missed it entirely, because the tutorial was pretty subtle and easy to skip over reading, but I went back and saw it on a second pass (since I had a feeling I was missing something).

The difficult spike between the tutorial and the first proper level is pretty significant, though I did eventually beat the first screen - I died when the boat was chasing me though. Some sort of sound effect to communicate to the player that the TNT box characters are exploding would be nice. At first I thought I killed the enemy by jumping on him, so I died a few times trying again.

What story I saw was simple, but very cute. Can't go wrong with pirates chasing booty.

Nice job, and congrats on submitting your demo!

Thanks ! Thanks for the criticism too they're actually helpful.

There's definitely a lot of room for improvement, but I'm glad you liked the concept.

Thanks again it's really nice to get these comments :)