Basically a clone of Cook Serve Delicious series in the world of construction
Submitted by guillaumequillet — 9 days, 7 hours before the deadline
Add to collection 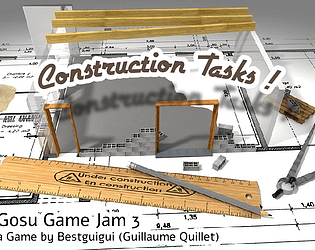 I'm a fan of typing game (I actually learn to type fast thanks to an old game called "Typer Shark Deluxe"), and this one did not disappoint me, really enjoyed playing it, I spent a very good time on this entry!

Thank you for making this game, you made me remember some good memory :)

Consider playing Typing of the Dead or the The Textorcist if you like typing games :) Thanks for your comment !

Well that entry is simple but pretty nice! There is some polish to it, the gameplay is very imple, yet funny and addictive once you found how to play it, really you did a great job! The presentation feels nice too and nice that you added some sound to it. Great job!

Thanks a lot ! I'll polish it more next jam, if the theme inspires me more ;)

I liked the concept how basically a series of similar images can be made into a game (though I am not familiar with that Cook, Serve, Delicious series). Nice touch with explaining all commands on the side though I lost quite some points with reading all options and checking their associated images ... I could use some lower speed for a start, then going faster. But looking at some CSD videos you ported its UI and gameplay loop very well.

One thing I didn't like was that pulsating "press this next" command in the middle ‒ it was just too much eye-captivating so I had to concentrate to not directly look at it so that I actually have some "eye-capacity" left for the other UI elements too.

Music is fitting though the "you pressed the correct button" beep gets bit repetitive after a while... Maybe each key could have some other tone associated with it? Tasks would then sound like little études or chord progressions instead of constant beeping.

Thank you ! At first, I wanted to give each action some sound effect. But time was missing, unfortunately. It would have been way better to include simple animations instead of this pulsating effect. Thanks for the feedback :)

I really like this one! I've played a lot of Cook Serve Delicious on my phone, and this certainly made me feel the same kind of chaos when things start to get out-of-hand. Everything feels like it's going alright until I get "roof" or "garbage"!

The music and sound effects fit really well too.

It could be interesting if there was a penalty when you get a key incorrect - punishing you for getting too hasty and making typos!

Thanks a lot ! If you felt a little chaotic like the original game, then I made what I wanted :)

Yeah, it would be a suitable entry also for the first GGJ with "Chaos" theme.