Destroy the enemy blobs!
Submitted by BlackQuiltro (@blackquiltro) — 1 hour, 37 minutes before the deadline
Add to collection 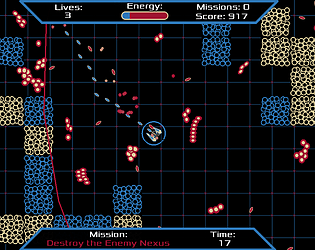 Neat game! I included it in my compilation video series of all of the Godot Jam games, if you'd like to check it out :)

This is one of my favorite types of games. Loved this!

As others said, controller support would be awesome. Appreciated the different mission types and powerups.

Looking forward to this or other works down the road from you.

@delgame: I think you are correct. I forgot to push a last minute change to git. Now the sources at github should run well (tested it on 2.0.3 and 2.1 ) Thank you!

It looks and sounds nice, but I can't run the source files correctly. I get a lot of error messages and can't even quit the game. The enemies don't spawn and when the time runs out nothing happens. I've tested it with godot 2.1 and 2.03.

@puppetmaster Glad you liked the game :). I found the Sound FX and music on opengameart.org. I think they were great and use them on my game. Credit is for the artist of course! Particles in this type of game makes everything look prettier :P

Thanks for your comments!

@kakoeimon: Thanks for playing and for the comments. I had planned gamepad/joystick support but did not had time to implement it before the deadline. I agree 100% that it should play better with it. I want to expand the game later with some ideas that were left behind so that is first on my list. I also wish I had more time to balance the game. I went with the idea that I played it too much when developing it so I might have put to much energy points on the ship and/or to frequent powerup drops on the final release.

@bathwater: Thanks for playing and I am happy you had fun! nexus can be found by following the "ping" circles that irradiate from them. If you have time and are willing to try it again it would be great!

Good aesthetics and fun action, but hard to understand. I played for about 15 minutes and never found a 'nexus' to shoot at. I just shot at the red blobs until they eventually got to me, and had some fun.

Not sliding on the walls was a little bit irritating.

Joystick support is a must for this kind of games.

I became overpowered too early in the game, I have finished 10 missions easily and lost cause there is no pause.