Things go whacky at the edge of space in this inverted space invaders style game.
Submitted by hermdog — 2 hours, 52 minutes before the deadline
Add to collection 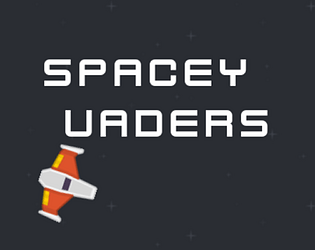 Participation Level across all Jams
Third

Awesome game! That game is in a way simplistic, but in the end has so many nice little details added to make it so great. Its a classic Alien Attack with no scrolling and role playing / story elements added. I like how you implemented the "Inversion" topic. That complaining alien attack coach is fun. And also there seems to be strategies... you kind of want to help earth, and need to get the defending ship quickly better but don't let to many ships go through... to sneakily help the humans win the fight.

I like the mouse control allowing to aim directly at the ships, so you don't have to draw that long line in your mind and see if it hits the ship shooting from the current position. That really adds more fun to the game - still some challenge left, so not too easy. I like the soundtrack, it's not getting annoying too fast. Still like to hear it after having played some rounds. Those special effects are cool... also that background changes during the fight. Was wondering if they have any meaning or are just decoration... because some look like steam that might originate from a already burning mother ship. The AI seems quite decent. Would be interesting to see how you scripted that one.

Also the effects on the ships hit by all that weapons (quite a varying amount of stuff) are awesome.

I like also the idea of being the game AI that sends out that alien ships... but needs to be careful to not scare the player away and not kill it too soon... and at the same time not annoy the player with to slow progress and sending out more and more different ships. Also it's not designed that way... I thought that's just absolutely a similar task, if you wanted the player (playing the human ship) to stay happy... and keep the difficulty level right in a balance.

I also love you included a high score list (damn just saw someone else kicked me off the 1st place! 😅 -- ok, fixed that! 😉). Also you just repeat that "message" drop and that "inverse" drop until the play has collected it (by accident or intention). So it cant be missed by accident! Well designed.

- The dialog box for conversation needs keyboard interaction. Thats probably because you didn't want that they are closed by accident by a mouse click. You could put a close button there... -or- have a timeout timer running (like 1-2 second) during which all clicks are ignored. Instead of just let the user wait, you could also add an animation for the box and then the text to appear.

- You could read aloud the dialogs.

- Bug? You are not give any points before you switch to the alien side... But storywise you should be able to collect points there too.

- I don't know why, but it seems the alien ship type switches sometimes without me clicking on that icon. But only if I have not the "10 points" ships selected.

A really interesting take on the theme and I'm always a sucker for a shmup.

However, I'm a little confused about what the goal is after the inversion. Is the goal to destroy the ship you were just controlling? Or are you supposed to muck up the alien plans and spawn ships into bullets?

The visuals and music are good though.

Great inverted take on a classic! I had a lot of fun

This was awesome :D

When I was first playing I thought yeah ok... but then with the inversion and different ships and upgrades :D nice job!

I liked it : graphism is very clean, gameplay works very well (although I'm not totally sure of what I was supposed to do as an alien :| ). And it was fun to send a barrage of bullets against those pesky ships!

Excellent use of the theme! Really cool to play the game from both the alien and human sides. I enjoyed the dialogs too, great use of the Kids these days wildcard.