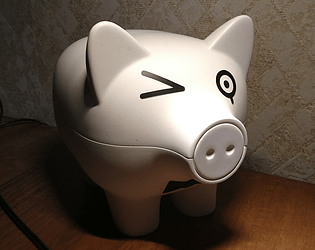 Fun clicker! I included it in my Godot Wild Jam #17 compilation video series, if you’d like to take a look. :)

I tried the macOS version, it launches, but when I click "Plunge into debt" nothing happens…

I tried to rebuild the project. Try again. If it doesn’t work, then I will use the bleeding edge version of the engine.

I got this error running on Debian (GNU/Linux) 10 stable:

"You should report this to the Dev of that demo. Official Godot binaries are built on Ubuntu 14.04 and don't have this compat issue."

Well, that’s pretty weird. I can try to build a project under the “official” version of Godot, but I can not guarantee compatibility with any linux distributions, even though I work under Arch.

Generally, I actually like clicker/idle games when they're well done. I think this has potential. I like where you were going with it, but feel like it needs to be a little easier early on to get people addicted. I actually think you should continue working on it - that's how much I thought of the potential. Good work!

…feel like it needs to be a little easier early on to get people addicted.

Due to strict time limits (free time after work), I did not manage to pay due attention to the balance and the prototype now issues tasks based on randomness from the set that was originally built in.

But, I think, the basic idea should be clear: I wanted to build the whole game on “second chances” and force the player to lose enough to win, but not too much for this to become a problem.

I actually think you should continue working on it - that’s how much I thought of the potential.

Well, if someone really likes the idea, then I will try to develop it much more than what I managed to do in the prototype. I have enough ideas to diversify the mechanics, terms of contracts and (even) the plot.

I don't think the Apple export is named correctly, at least - it looks like it was made either for Linux (x86-64), or for Windows (.exe), but not Mac, which is usually .dmg.

I work under Linux, so when exporting for MacOS, I get a .zip file. Should I just rename it to .dmg or do I need to unzip the archive and send its contents to channel?

Okay, it seems it's just a weird naming thing. My apologies! The Mac app works. Will post a rating shortly.