Regrow an empty wasteland -- Made for Go Godot Jam
Submitted by CaveL1ghter — 20 hours, 17 minutes before the deadline
Add to collection 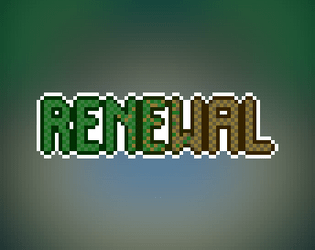 a sleepy crow48 days ago

It took me awhile to get the hang of it, but this was a relaxing game and I had to pry myself from it so I could rate before time ran out. I couldn't figure out how to plant the tomatos though, but I enjoyed it.

I finished the game. Like Sosasees says the end game is starting to get boring. Ok i was not playing carefully so i almost got myself killed in the final minutes :).

Overall the game feels very polished. Graphics are nice except it is someties hard to see the edge of one square. Clouds add a lot of immersivenes to the game. Music and sound effect are nice too.

Overall very Good Job :)
Just a little bit of thinking some more game elements to the end of the game would make this game much better. Maybe grafting weapons against some other wild animals or just drop the finish to 25%.

This game was really interesting and good at the beginning.

After a while, it became boring because it was repetitive, so I already considered the game completed at 10% greenery instead of the intended 50%. At that point I have already

(Spoiler Warning: I wanted to Hide Spoiler Text in Markdown Spoilers, but when I have typed this comment this didn’t work. You’re about to read Spoilers, please skip the Bullet Point List if you don’t want to read spoilers)

, so at this point i’m Sure that the game has no more content left. and if it Has, i’d still just play another game instead because they’re much more engaging.

How can I plant seeds? I could not figure that out.

What exactly counts as “Soil” in this game, and how can I make it? I made a Hoe, but I can’t use it to make Soil from Grass or Dirt or Sand or Stone.

Update: I found it out: You need to place an Enricher on Dry Dirt so that the dirt becomes Wet so that you can plant Tomato and Flower seeds there.

nice game , but it takes a lot of time to do things

I like the idea a lot! There are nice touches like how the env changes the further you go from the oasis, and the little compas that shows you where it is . There is however stuff I don't know how to do, where do I plant the tomato seeds and how do I look into my full inventory outside of the shop?

EDIT: Alright, so for those who are wondering: the controls are on the game's page, you need an upgrade to make soil appear, but that's okay because you can keep mining and cutting wood without SP. ^^

Yeah I could have done with a lot more in-game tutorials, but sadly I ran out of time to implement them so I had to rush some details onto the itch page sorry :(

Oh no don't apologize, it's on me for not reading the page lol! I figured it out in the end and it was still fun :p

I think, there is potential in this game. I would play the game like this, if there is more to do. Good job.

Would love to read your comments on my game

The macintosh version doesn't want to open, unfortunately. I might try again on my PC later.

Pretty cool, but a bit slow.