A game created in 48h for the Game Maker's Toolkit Jam.
Submitted by Tito Lívio — 57 minutes, 23 seconds before the deadline
Add to collection 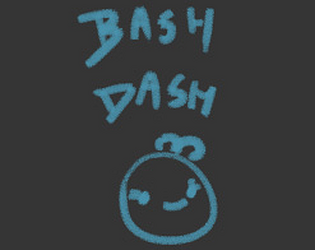 How does your submission match the theme?
The main mechanic is the ability to bash on the ground. Depending on how long you charge your bash, when hitting the ground the character emits a shockwave which is the weapon of the game. The bash is also followed by a quick dash that lasts according to how long the layer charged the bash.
Not only that, but the player only regenerates health when standing still.

The core loop of the game is to master how long you want to charge your bash, in order to defend yourself with a shockwave, or to quickly dash around while waves of obstacles come flying at the character.

Cute main character! I included it in my Game Maker Toolkit’s Game Jam compilation video series, if you’d like to take a look. :)

I had a lot of trouble timing the bash with the enemy attacks. I would wait and when they got close enough I would execute the bash, but by then they would've already hit me because it took too long. I also couldn't tell the area range of the bash until after it happened, so it would be nice if while you charged a little circle appeared (think Twilight Princess Link wolf-form group attack thing). Animations in general seemed to take a long time, so it was just easier for me to run around dodging enemies.

I did really appreciate that little tutorial at the beginning telling me which keys to use my god I loved that so much.

It's a shame there wasn't any music.

I think if you worked on the feel and controls of the game and had it a bit faster paced it would improve.

I wasn't really feeling it at first to be honest. The mechanics as they are seem to encourage a gameplay loop of standing still for long periods of time until something relevant happens, then passing a basic but frustrating timing/reaction check.  I think the main problem is that a bash requires too much investment. Not just the charge, but also the execution time. Since the jumping part grants neither speed nor iframes, the delay between when you release your charge and when something useful happens is usually longer than it takes a freshly launched tile to reach you. This combined with the attack's brief hurtbox means you have a very small launch window just before the tile starts moving, which is very difficult to hit since its telegraph is so vague (when it doesn't just launch from off-screen). It also doesn't help that there isn't a clear indicator that a full bash is ready, especially since a non-charged one is pretty much useless.

However, I then found out I can charge my next bash while dashing and much more interesting strategies became possible.  For example, using an initial bash to clear an opening in a large group of tiles, then kiting the others with a roll while charging another attack. This discovery didn't alleviate the above problems for me, but when new strategies emerge with player experience, that's a sign of a good core design, which in my opinion is the most valuable trait in a game jam, not mechanical issues that would probably be solved with more time.

The main issue for me is just not that interesting core game play. The charging up just felt slow and it was hard to dodge attacks when they were coming from off-screen.

I do love the spike and enemy spawning visuals :)

Talk about not judging a book by it's cover... Didn't know what to expect, but I certainly didn't expect that! The animations and graphics are hella polished, and the gameplay is actually reasonably challenging! The patterns of enemies and spikes were done pretty masterfully, slowly ramping up in scale and difficulty... All in all, I had a blast. Well done!