Rythm Game with Only One LaneView game page

A rhythm game where you jump on the notes.
Submitted by Thunderous Echo — 3 hours, 4 minutes before the deadline
Add to collection 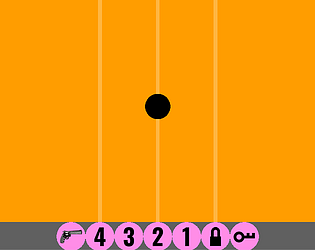 Rythm Game with Only One Lane's itch.io page

This was really good! The concept is really simple but it has a lot of mechanical depth. I especially liked the times the game forced you to change lanes by placing keys after the locks.

A few nitpicks though, because I feel the game has a lot of potential:

-It was kinda hard to tell apart 2 and 1 notes when they appeared in quick succession, I feel like they should be easier to tell apart at a glance (giving them some difference in color or shape?).

-The 3 and 4 notes can be hit multiple times in the same lane if you mash the button and I feel like they'd be more interesting if they forced the player to change lanes instead of just straight out murdering the down button.

-It can be kinda hard to see in which lane the ball is when you're paying close attention to the notes so maybe a color change or some other visual effect could make it easier to tell.

Overall the game was really impressive both with its premise and the execution. If you polish it up a little and make some more levels (maybe let notes come from both sides at the same time?) it would definitely be something I'd be interested in!

I like rhythm games in general so this was quite fun for me, but it was a bit too challenging.

I played it several times but I could never get a lot higher than zero :b

Great work overall I love the concept, for a 2 day jam this is pretty cool. Good job!

Submitted
Lurking in the Dark
LikeReply
Thunderous EchoDeveloper3 years ago

THIS IS SO CHALLENGING i love it. I couldnt get a positive score xDD.

Solid and creative rhythm game! The chart is clever and matches the song really well!

I was able to easily get a lot of the 3s and 4s by hammering the 'down' arrow key really fast on one track -- might be worth adding something in to disallow that, but not a big deal.

I consider such things... advanced strategies.

super hard but super rewarding. I love it!

really cool approach to the theme.

It took me time to figure what I should do in this game, but once I got it I had a lot of fun. It has the potential to be a really good game with some adjustments, like giving the possibility to play with the keypad, not everybody has a qwerty keyboard. Nicely done anyway!

Yeah, adding key rebinding will be the first thing I do if I continue working on it after the jam. I'm glad you enjoyed!

I think the game would benefit from having specific color that went with each number. Sometimes it was hard to tell if I already hit a number or not. As others have mentioned, it is a very challenging game!

I considered adding different colors, but I felt it would take the challenge out of the 212212212 section of the first level.

I agree with your assessment about the level of challenge. I haven't been able to do the 4 key 4 lock part at the end of level 1.