Use your only one prism to navigate the last sun ray to new life
Submitted by skemp — 5 hours, 15 minutes before the deadline
Add to collection 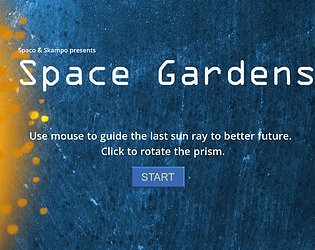 Interesting idea but found it a bit troublesome, I'd frequently mis-hit the ray trying to position the prism in time.

It would have been cool if there was more visual feedback (an animation instead of flipping instantly, maybe?) on the rotation. I kept forgetting which direction came next. And maybe left/right click could rotate in different directions? It was sometimes tricky because I wanted to reflect it one way and then almost instantly reflect it with the rotation three clicks away. Though maybe that's an intentional part of the difficulty?

But yeah, that was fun. I always like games where you reflect a thing.

--Josh (part of teamwintergreen for the jam).

are you sure that this is how a prism works? :D

This prism has always wanted to be a mirror. This is her dream come true :D