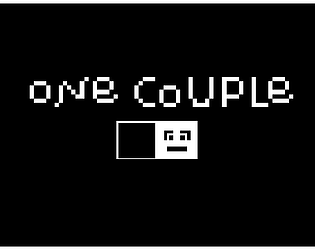 Cool concept both for single and multiplayer. The heart in the upper left corner is confusing. I guess it stands for 1 life but why would you even display it then. The love couple theme didn't really translate well for me.

Hey there, nice concept but a bit far away from the theme also hard to find some logic with the couple and you shooting at things but it has some potential!

Submitted
The only NeOne
LikeReply
Ankush Rai238 days ago(+1)

fun game.... best use of minimalism

This is a pretty cool little game.  The graphics are simple but pleasing, and the controls feel good to play with.  Like HackTrout, I eventually noticed that only four enemies spawned and would only kill fast-moving enemies until I only had four slow ones left, making it easy to cheese the game.   Aside from that, however, this is a pretty solid game, so nice job!

Its made that way to stop the physics from going crazyXD

i will gladly make this a full game if people tend to enjoy it.

+ I liked the boss fight, but he was a bit of a pushover. More phases would've been nice but still a plus in my eyes.

+ The enemy designs were nice with the black and white aesthetic.

- After dying a few times, I noticed that only 4 enemies spawned at a time. Knowing that I decided not to kill any more enemies and simply out run them as no more would spawn.

- I felt that there wasn't a strong connection to the theme. Having only one minute didn't really make this game all too different from other top down level based shooters.

Overall it's a nice top down shooter but it could do with  different enemy behavior.

Thanks for the response! And yes i'm highly aware of the bugs and the enemys physics etc. But sadly Time started to run out, and i ended up not having enough time to fix all of them.