Parkcorn is a plattformer... without plattforms! Beware of spikes.
Submitted by Le Don — 48 minutes, 33 seconds before the deadline
Add to collection 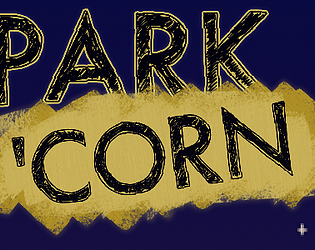 That was cool! Its a neat idea, being able to only wall jump.

However, I had a couple issues. It's a little unclear exactly what you're supposed to do and where to go, especially at the beginning. Maybe some signs so you only need to figure out how to get there instead of where to go? Also, I feel that the hazards were kind of hard to distinguish from regular platforms, especially the rails.

Nice job though! I found the voice acting quite amusing!

took a while to get used to the controls, wish you could hold spacebar to glide or something, but after getting the hang of it was pretty enjoyable to play

Nicely kinda polished game! I like the fact it actually has music.

Didn't even really care that it only had 2 levels, as the second level was a nice kind of challenging.

Collisions are a bit rough, but what do you expect from a 48 hour game? It still controls well enough to be challenging, but not frustrating.

Thanks a lot and you're right about the collissins. I'm not quite satisfied with the hit boxes, either.