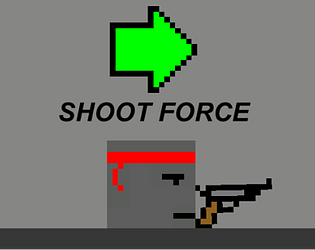 Although the concept has been done a lot in this jam, I really liked the way you set up the corridor level to teach you that you can kill the enemies. I got a satisfying epiphany moment out of that, and realising how ridiculous it was in a game with a gun that I hadn't actually tried shooting the enemies!

Pretty fun control scheme actually and I enjoyed the short levels, they are good for a game jam in my opinion. The graphics are simple but do the job. There have been a lot of platformers with unusual control methods and this isn't all that different, so it doesn't stand out for me but I had fun nonetheless.

Interesting concept. The fact that you could shoot enemies didn't feel as instinctual as it probably should - especially considering how the gun had been used for platforming so far, and the shurikens aren't exactly 'organic' enemies that seem to be killable. Maybe consider giving more obvious effects? Or perhaps lowering their hp to kill shurikens on one hit. It would also be great if you placed the corridor full of shurikens level as your first introduction to being able to shoot enemies so that it's more intuitive to shoot your way through, and introduce the concept to players faster.

Thank you for your feedback! I agree, I should have lowered HP of enemies)

Not too original of a concept but the execution is great.

Shoot provides everything - Jump, Movement, Damage. If I am not wrong, it actually fits the last GMTK jam theme very well.

Fun!  I like how expressive you made the main character.  The level with the corridor was frustrating until I realized that were forcing the player to learn that they could shoot the things that kill you.  Nice touch, but it might have been nice if it was done where it was more obvious that you con't get past them.  Like if there was one that just went up and down in the mouth of the tunnel.

You can actually get past them without shooting them

Well done if you managed to pass through them! But actually you supposed to shoot them :D

fun game. almost impossible to control with any competency. I didn't know you could shoot the stars until the level with the long hallway that was blocked.

Thank you! This level was was designed  to teach players that they can use their gun not only for movement)