Created for the Giant Rom 5 game jam. An adventure puzzle platformer.
Submitted by Frump (@Frump3d) — 3 minutes, 15 seconds before the deadline
Add to collection 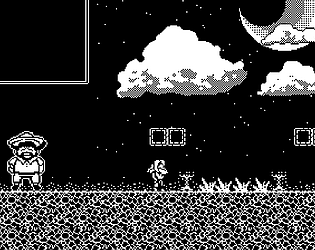 Team Members
An Unfinished adventure puzzle platformer. Check back later for an update.

When that first shift happened and revealed the hidden room behind the bushes, I was kinda blown away. This is really cool! The stark graphics (technically more than 1 but less than 8 bit I guess?) I think really help sell / hide the perspective change. It's really cool, really slick for a game jam entry. Also your sprite work is spot on! Really good job!

Maaaaaaaaan it's so sad this is unfinished. The visuals are amazing and the concept so promising. All the kudos for the artwork, these sprites are perfect!

Wow! Really cool idea! I love the perspective shifting and think that you should totally continue to work on this and expand it into its own thing. Loved the music and visuals too!

My character sprite disappeared the first time I shifted and wouldn't come back, though you could tell I was still moving around. Had to restart the game to fix.

This mechanic and idea is legit, and I love the art style--

Plenty of people (myself included) would be into a full game that had this kind of perspective mechanic that went harder on actually having challenging platforming.  Fez was awesome but it was heavy on the puzzles light on the platforming.  Maybe do the opposite of that... if you decide to go any further with the idea (which I am in favor of, but I don't know what your creative goals are). Anyway--  Really, really cool.

I did fell through the world several times trying to do the first platforming bit, but I'm sure you're aware of plenty of things like that (my game is buggy as hell).

Thanks for the feedback, glad to hear you were into the idea. Originally I did want it to be more of a platformer with spikes and enemies and stuff. Then I changed the idea to just some light platforming to collect some items because it seemed more in scope for a jam... I do want to continue working on it so it's eventually presentable on stream.

I know about the bugs, hopefully it wasn't too annoying that I didn't put a respawn point in. I think I introduced the bugs at the last minute too in a daze from working too long.

My twitter is @Frump3d but I haven't been tweeting for ages now, I barely read it anymore either.

I love the "shift" mechanic