Submitted by XSystem (@XSystem252) — 6 hours, 6 minutes before the deadline
Add to collection 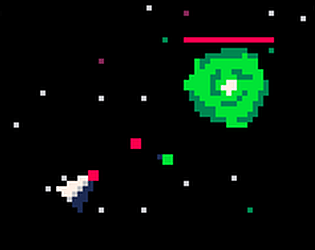 The movement and camera when moving diagonal is really jerky? I can't tell for sure but it kind of looks like it's alternating between moving/scrolling horizontally and then vertically every frame? It's really weird.

There's an old shmup, Fantasy Zone, that dealt with the problem of the game getting easier after you destroy targets by spawning enemies randomly as you move around the level. But there are a bunch other approaches you could take too, if you think that's something you want to do: power up the remaining enemies, etc.

Fun little space shooter. Wish there were sound, or difficulty that increased rather than decreased as you progress, but a good start for a game. It took me a few tries to realize that the bar over the enemies were health bars and not landing platforms.