The Risk board game like you don't remember it from childhood.
Submitted by piesku (@pieskucom), stas (@stas), michalbe — 4 hours, 16 minutes before the deadline
Add to collection 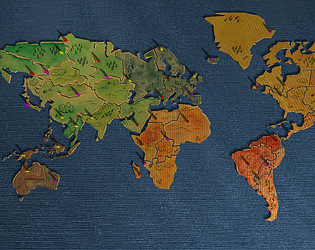 The most elaborated background music in the whole jam 😃

I haven’t played this with WebMonetization.

I was a bit nervous when I first saw the Windows window decoration (abandoned that OS about a decade ago).

But it was playable on Linux! :D

I missed the army stats. The log window made me scroll the whole window, too. In the end, I switched to the fullscreen version you linked to and won! \o/

Would it have been possible, to have the stats as Heads-Up-Display on the scene? Or, alternatively, put an overlay on the land pieces to indicate their fraction (and possibly the army strength)?

I was not sure, how the battles were fought. Having a majority not always guaranteed success, so I assume, there’s some kind of randomness involved.

I enjoyed the gameplay and the figures. Great work!

Submitted
I Really Move On
LikeReply
stasDeveloper1 year ago

You're right: battles are not deterministic and in fact follow the rules of the original Risk board game. There are dice involved (up to 5 of them, actually) and we compare the rolls in pairs, from the highest to the lowest. Would it help if we logged what numbers rolled on the dice?

As for the stats, do you mean army strength and health? Or perhaps whether an army has moved this turn or not yet?

Stats refer to the number of troops per country / landmass. I’d assume that I can win by sheer size. Interesting to learn, that the army can loose power over time by injuries.

The logging is tricky insofar as the window remained at the top of the log the first time I played it (in Firefox, within the itch.io iFrame).

Plus, I don’t need the complete log of everything that happened before. The last move is enough. How many armies does each player have? Which continents are close to getting conquered etc.

Back then, I played Warlight online. I believe, it’s now available at https://www.warzone.com/ (if not sued out of business). You might get inspired there if you plan to continue on the game. (Please do!)

Haha, thanks. I'm still waiting for the Academy to get in touch with me regarding the Best Sound Oscar :)