Wake Me Up Before You GoView game page 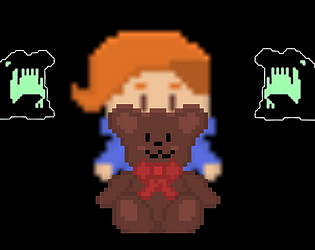 Wake Me Up Before You Go's itch.io page

Challenging, fun, and addictive to the end (of which I have not made it to the end YET, but will continue to play when time permits).  Keep up the good work.

Fun game! Surprisingly cute enemy designs, even if the scaling is a bit unfortunate. The last stage is surprisingly difficult, but I was able to get through it with some trial and error - maybe a short grace period of invulnerability after getting hit would be good?

I'm probably bias but 10/10 since I like puzzle games~

Interesting puzzle mechanic. Agreed that you need to use "nearest neighbour" when increasing the size of your pixel art.

really enjoyed this one! the music was amazing and i enjoyed the mechanics :)

i have a couple of criticisms:

Thanks for the feedback on the pixels. I figured out how to get a clear image a bit too late. I've been trying to look for that setting in Asperite, but I couldn't seem to find it. I was able to convert the furniture before we submitted it, but I just exported the image at 1000%. If you have any info on where I can find that setting, I'll be sure to do it in the future!

Unfortunately, the Mac version is kill :( it won't play - it just says it has been corrupted and tells me to put it in the bin 👀

Update! If you're on macOS and trying to run it, open terminal and run this command and it will work:

I should leave some feedback along with this huh!
Visually, it works pretty well, though I would say that the on/off states of the lights aren't clear enough and that some of the tiles are really blurry. Potentially an issue with compression? I'm not entirely sure to be honest.

It took me a LONG time to finished the last level - could definitely have been made shorter. Though it was the only one that really posed a challenge once I worked out all the mechanics, so that definitely goes in its favour! The mechanics are simple and the puzzles are well done. I liked it.

The adaptive audio was awesome. Not sure what else I can say there 😂 the sound effects were maybe a little bit harsh, but that's only me being nitpicky.

Thanks for your feedback on the level design! The last level was the first one we made and we over scoped ourselves a bit with the levels so we decided to make it more linear, I can see the last level taking long and appreciate your feedback!