A Super Fast Stealth Game. where death comes quick to those that arn't quicker
Submitted by jacobsmith3204
Add to collection 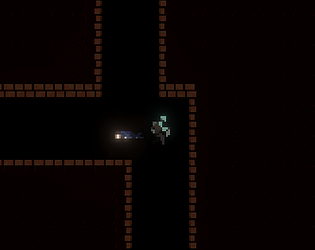 Theme inspiration
keep your eyes open and be aware of your surrounding. it's easy to die and there are lots of them.

Sensory Info
has bloom which can flash a bit.

Content Info
there is some red pixels when you die that is suposed to be blood, also the use of guns and weapons

Love the gameplay - very quick and responsive. I would prefer if the contrast was higher between the level and the enemies. Currently it is causing a lot of strain on the eyes - even though my monitor is pretty well calibrated (for art).

thanks for playing. im glad you enjoyed it.

someone else pointed out that that the walls of the levels were too dark. would this be what you are refuring to by contrast... or do you mean something else, if so could you explain it a bit more. that way i can understand

Yes, I'd say it is primarily the walls of the level that are too dark. The player character stands out very nicely, as do the telegraphs for the attack. It also feels like there is some chromatic aberration happening to the enemies at the edge of the screen which makes them a bit difficult to spot but the attack telegraphs make that less of an issue.

cool i will fix that once the jam is finished

hey ive uploaded the new version, its a bit more pollished all around. just wondering if the fix for the level brightness is good enough to make it more enjoyable

Yup. This looks much better! I see you've also added a level (or moved one around). There seems to be an issue with the input getting stuck in some cases, causing the character to get stuck in a wall till the opposite direction key is hit.

when exactly does the input get stuck?  and when you say you get stuck in a wall are you actually in inside a wall or just against it.

I like the dash a lot, it feels really great ! The game is nice, and the sound effect for killing an enemy is perfect ! It gets really hard by the end and maybe a little repetitve but for a jam game it is really great :)

Also, the maze is a little too dark I think, because I had to raise the luminosity of my screen to see where the walls were x)

Submitted
An aware guy in the past
LikeReply
jacobsmith3204Developer3 years ago

thanks, i thought about adding more levels but cut it for the very reason of it becoming to repeditive. i think there might be 1 too many levels, or just way to many enemies in the last one, i think there is around 50 of them or something. but yea i completely agree.

As for the maze being dark was trying to cut a corner and not have to draw the ground. and i thought the walls being too light would make the ground being pitch black stand out a bit too much but if i was to go back i would change that. seems to be the biggest problem that people have with it.

hey the jams over now so i got to update the game to a more pollished state, i took your critique and made the levels a bit brighter.  and it really does help the player with the level navigation.

I like it, but I got trapped between three guards unfortuantely, it is kind of hard (or am I just really bad at this sort of games?)  also it would be nice to know what my goal is

it Is just really hard. I died like 30 or so times on the final level.( There's about 8 in total )

I focused mainly on the gameplay and making it feel polished and didn't really have any extra time to add in a story. To be honest it's kinda hard justifying taking out so many people, perhaps like a revenge storyline where their gang do something bad to you and you go around killing every last one of them, like John wick.

That might actually be pretty cool. I could do like a boss fight where you take out the gang leader or the people who orders the grunts around.

I also had a points system I was going to implement. So you could see how well you are doing compared to previous play throughs. But that got cut due to time restraints