It's a story driven game in a post apocalyptic sci-fi world.
Submitted by BigETI (@TheBigETI) — 13 minutes, 7 seconds before the deadline
Add to collection 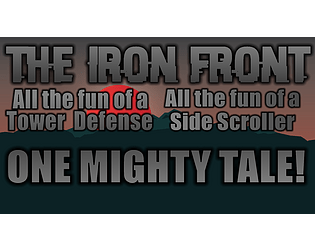 Story Teaser
A post apocalyptic world, where artifical intelligence almost wiped the entire humanity out. You as a protagonist has to find scrap and food in a city to survive. The AI is already waiting for the death of your protagonist...

Picke Riiiiiiiiiiiiiiiiiiick. That's what I thought after seeing this old man beating stuff. I like its graphical style, nice music too and the menu looks quite decent (except for that green in the buttons xD). But overall yeah, GUIs are pretty nice.

I think I found a bug regarding weapons, though nothing really problematic here. At my first attempt I got a flamethrower, sniper and assault. Then died against the first wave of enemies since I hadn't grasped the controls (took me a while to notice that text that says Q to change weapon). But still I was trying my weapons, and the enemies just flanked me. But yeah. Here comes the bug I mentioned, sorry. After dying, I gave it a retry and for some reason it kept saying me I had the weapons. So yeah, nothing critical, just a minor bug.

I think enemy waves could use some variety, they're just flanking enemies everywhere. Also why are those robots at the center helping you? I guess they help, even if at first I thought they were trying to kill me. But yeah, nice work guys. Pickle Riiiiiiiiiiiiick. I'm taking as given you people know Rick and Morty.

The music is incredible, but the gameplay feels lacking. Probably due to time constraints.

Thanks! Me and the team worked hard on it :3. And yes, we only had 4 days to create a game so we were heavily constrained for time :p.

Did not quite understand the story but it had a nice overall look, feel and sound. Didn't know what to do after I got teleported into the battle arena, lol.

I wrote the story, what elements of it were confusing?

Any game were you have not one, but two active flamethrowers is a win in my book and the way combat was handled was very creatively. Loved it well done!