Friends Beyond the EndView game page

Use your dead bodies to complete all levels. Die wisely!
Submitted by Dotto4213 — 8 hours, 21 minutes before the deadline
Add to collection 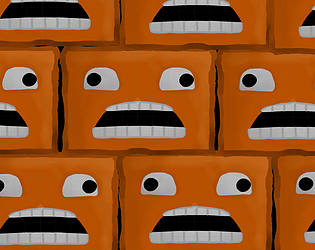 Friends Beyond the End's itch.io page

In what way does your game fit the theme?
In this puzzle game, when you die you leave your body which is interactive object in the game, dying in specific ways, REWINDING to the begging of the level and using your bodies to win is crucial to finish any level.

Did you write most of the code yourself and made all the assets from scratch?
All of the code, levels and animations are made by me. Some graphics and sounds are free assets I needed due to lack of time :P

The difficulty in this game is great! Really challenging!

Only need a rythm to the game, for the player understand how to move and interact with your game.

wow. Level 4 was pretty hard, but the level design on level 3 and before was spot on.

The small animations on the orange blob really helped sell the game and the art is crispy, and interesting.

I think you delivered on a good set of puzzles to solve, and I'm glad I got to play it. Btw, this game fits the theme very nicely while not being too repetitive.

Hey, I jsut played your game but something feels off, here are my thoughts but first, a few things that I do like:

1) Great theming - Perfects one of the better games that take REWIND to a very good level. To rewind, can also very loosely be to re-iterate, and you game title is just *chef's kiss* cherry on top. Love it. The idea was also executed well as a platformer where you have to die to progress.

However, maybe your game is bugged - I can't progress past the first level at all, it seems like my character is moving too slow to progress the first pit of spikes. So unfortunately I can't comment too much, but I will do my best to suggest some more ideas on improving:

1) Consider adding a lives-left counter, so that players can plan ahead. Because this game can be considered a puzzle-platformer and with puzzle games, you have to give the players all the tools they need neccesary for their success.

2) I think you should keep the levels to a 'single screen' - think Celeste for most of their levels, this allows players to look at all the elements, plan, and execute accordingly. However I am subjective on this as I can only play the first level.

3) You need to add some tutorial - although WASD is quite staple, I didn't know Space was the instant-die mechanic, and that W is the jump. It was a bit jenky fiddling around the controls without a tutorial.

All in all - this is a flawed diamond is the best way to put it. If I want to be honest, I can't say it's good unfortunately - in my playthrough I think the game was broken by a game-breaking bug which is my character moves way too slow (especially compared to your solution video where you character moves way faster).

BUT, don't lose hope. Honestly - this game idea is actually very good theming, If you would revisit this game in the future, I would implore to add more polish, fix the bugs, make more levels and I'm sure we'll all have some fun dying over and over.

Thanks a lot for advice! I will put fast update when i get back to my computer with project. Life counter is in next levels and instant die mechanic is introduced in level 2. I will try to fix this movement problem and add more lifes, thanks for playing!

I really love the idea, but it felt so hard! Something about the jump, it seems impossible to get over the spikes on the first level, even with my body there! If there were more lives it would have been totally fine. Either that or I'm just bad! I think your art/animations were nice, and the music fit the game too. I hope you keep working on this!

I let my friends play it and they told me that the game is super hard too xd. I didn't know it when i was making this because games are always easier for creator to complete. You can see my whole Walk-Through in game site, if you are curious how all the levels looked it lasts 3 minutes. Thanks for playing though!

I will add some lifes when i get my computer with project! Thanks for advice.

Really cool concept I liked the menu and level design! it was really interesting!