An old-school dungeon crawler where you draw your own map as you explore the world.
Submitted by SplicedGames (@SplicedGames) — 1 day, 9 hours before the deadline
Add to collection 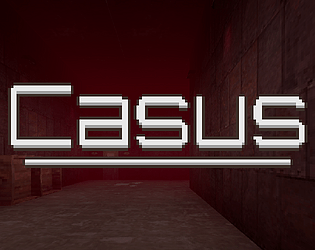 great choice of music and atmosphere!

I dig the etrian odyssey vibes and look forward to seeing more.

I wish you saw enemies on the map, unless they're random encounters (are they?). And I feel like you should start the game with all items equipped + a basic skill unlocked, I died a few times before I realized I was falling for that "noob trap" and was able to continue after properly preparing myself.

Thanks for checking the game out. Right now the encounters aren't random, but I'll most likely be changing it a little for the next demo after I test some things out. I'll also find a way to introduce the player to spells/equipment before they actually fight anything, maybe in some type of tutorial.

I like the manual map drawing, but to be useful it shouldn't be cleared when you start a new game.

I agree, I'll have it save automatically during the next demo.

I'll write down notes as I go:

Mazey map design is interesting, but not being able to sprint through it makes it less pleasant to traverse. Expected loot in deadends and was not disappointed. Except for bottom-right corner, it just had a newspaper lying around, but that would be acceptable if levels had more creatures going on.

I sure hope that trees become cuttable down later in the level because having to back-track navigate to spawn point is tedious. You could have bushes replace trees near spawn point which then later you get shears or something to cut down, making it easier to get to distant parts of the map. Same for trees, but later and with an axe. For example rocks could not be removable and would act as trees do now.

I'd suggest adding more creatures to fight against and more consumables to pickup. Most of the encounters should be easier - after each encounter I wanted to rest and regain my stats. I wished each encounter dropped something.

Audio is very nice and tag pickup sound was very familiar and nice.

I liked that even if I was constrained in grid movement I could still walk around and peek at dungeon behind trees.

It was silly at first that I had pistol in a medieval dungeon-maze, but after finding a bike I realised what the game was about.

It was unclear in the battle what simple "Attack" does when I have a pistol and it seemed like I did more damage than bare hands. Overall, skills should display expected damage (or it did and I just missed it?) as battles are rare and intense.

Interesting game, I haven't played old-school dungeon crawlers before though.

Thanks for a lot of feedback. It was really helpful.

I'll need to fix some of the scaling issues, because I didn't test for 21:9 aspect ratio. Hopefully, once I add a tutorial, a lot of the menu issues and early confusion can be fixed. I'll also need to look at the balance of the battles and backtracking to restore stats to make it less tedious. Same with the amount of combat and items throughout the dungeon. Skills don't display expected damage yet, but it is a good idea to add that to the tooltip. Some of the doors were one way, and unlocked once you entered them through the other side. I'll find a way to make it more obvious.