A simple action platformer
Submitted by korpiroot — 2 days, 20 hours before the deadline
Add to collection 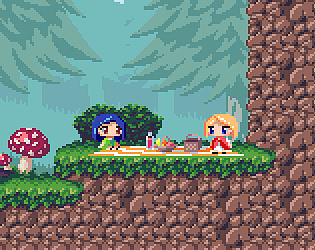 Too hard for me. You have some amazing mechanics, but because the stage has a lot of going on in it right after tutorial, paired with rapidly rising difficulty, player doesn't get to learn those properly. You could make a whole stage around pebble kicking alone just because of how many uses there are.

Controls are fine, but maybe too fast considering enemy and spike density.

I've been fooled by the amazingly cute art thinking that this was going to be an easy game. It was not. It made me feel like the plebbest pf the plebs. Once I got used to the controls it felt really satysfying to play (but still challenging). I feel like the roll attack is almost impossible to control and I fell into the spikes many times (expecially on THAT snake. You know the one). I may just be used to mario games but i think the camera moves too quickly when you move and makes it very frustrating when you have to land a very precise jump.

For the players that are reading this: If it feels too hard, just keep playing. The better you get at it the more fun it becomes!

I've never actually played this before, so I'm getting my first look with this. First I wanna mention that the visuals are really incredible. The only thing I might say is that the repeating brown ground tile might be too busy or that a closer background layer might be nice, but you have a nice style here and everything looks good. The tops of the grass tiles especially look nice.

Controls to me felt punishing. I felt like I was moving too fast with small inputs, so it was hard to maneuver, especially on the tree with the cut off limbs. Also, because of how fast you go and how small some of your attack hitboxes are it felt too risky to jump into a bee or something and attack, because I would almost always take damage immediately after attacking. Also, while I liked the roll attack, having the bounce be so hard to control was really frustrating, especially when it wouldn't kill the enemy and forced me to redo an entire climb. Having it send you further up might feel better, definitely experiment. Also I see what youre saying about teaching the player the up kick, and while this is how I got out of the starting area, it didn't really click to me that this was a double jump, I honestly thought I'd cheesed the game with this.

This game looks and sounds really nice (I think I heard 3D audio effects?) but it feels kinda imprecise. I wish I'd been playing it all these past demo days, keep it up!

Hey, thanks for playing. I'm glad you like the visuals, even though looking at your recent spritework I feel like I'm far behind you. There was actually going to be one more background layer in front of the others, but I didn't manage to finish it in time for this demo, and there's a slight perspective issue with the current layers that's bugging me which I might attempt fixing first.

I've got lots of similar feedback on the controls, and since I want to keep the combat pretty similar to what it is now, I'll probably reduce the inertia a bit more to allow for more precision, and perhaps reduce the max horizontal speed to previous demo levels. There'll definitely be tweaks to the attacks too, and perhaps a few more of them; there's already a simple autocombo implementation in the game but no attacks to combo into yet.

There's indeed a kind of simple 3D effect for some sounds, it's a built-in feature of SDL_Mixer and quite easy to use.

The fun factor already improved a lot thanks to the better level design and controls feel nicer too compared to the last time I played (DD13 I think?). I'm using a controller and I don't think they feel too floaty, I had a bit of trouble jumping on the tree with the tiny branches though.

I'm not sure if I'm doing it right but I have to use a dash to get out of the starting area, it feels punishing since they are limited and I almost got stuck once going back to it with only one dash left. Rolling is fun but I can't find a way to stop it instantly which often means I get hit by something before it ends, it doesn't feel useful since the level is full of evil stuff ready to kill me at the slightest misstep.

I think the game would benefit from being less brutal in general, some enemies like the mosquitoes are annoying, some take several hits and some are in the worst places possible like the snakes on the tiny platforms, there are spikes everywhere and I lose all progress when running out of lives.

I found the semi-secret sign to the upper left but I couldn't reach it the first time since I had no dashes left, so I had to backtrack and try again once I got more energy, I would personally make the dashes infinite and work out a way to make them not overpowered, I don't think such an important movement ability should be so limited.

There's probably a bunch of stuff I forgot to post about but I love your game, it gets more fun the more I play it but losing all progress every time makes me sad.

Also I just realized that the life pickups are the girl's head, I think they look like seashells.

Thanks for playing. I'm not entirely sure how you'd get out of the starting area with the dashes, besides wasting all of your energy in multiple consecutive ones. The point of that cliff blocking your path is to teach the player the alt attacks which you can use by holding up/down while attacking, and the intended way is to use the flipkick (up + X) as a double jump. Very few people found those attacks in the last demo so I figured there has to be an obstacle that forces you to use them.

The difficulty curve is rough right now because as the gameplay keeps changing between demos, I need to make new levels to match, and I need to cram all the features in the new levels. If you play through the old levels in extra mode, you can find numerous shortcuts and bugs because of the new movement options. The "real" levels will have a much smoother curve eventually, though expect the last levels to be at least as difficult as the second half of this demo level.

Recharging magic has been suggested multiple times now, I'll probably implement it in some way but I don't want to reward sitting idly waiting for it to charge, or having to backtrack to some magic fountain, so I'm still thinking of ways to introduce it.