For this game jam I'm planning on making a game about a nonbinary aroace race car driver named Avery!
Originally I was planning on making a racing game but since I have other things that I need to do this month and also since I suck at racing games ( I'd rather get good at them first before making one)
I decided to make it more of a game where you're exploring Avery's life since they like to take things slow at home and they're just a super calm and sweet person.

At the same time a conflict they're having is that some of their fans are hitting on them and like idolizing them which Avery honestly doesn't want. They just wanted to be treated like a normal person....but they also haven't come out to everyone about being aroace which they're kind of nervous about doing.

So! In the game the player gets to make some choices as well as do little mini games while exploring.

I'm planning on doing pixel art since I want to practice and I'm deeefinitely creating this in Unity cause it just feels easier for what I want.

- Have a day system

- Have more than 2 different endings

- Let players be able to save the game

What I know I'm probably going to do instead is:

- Have a save system

I wanna keep this game short and sweet so I might even cut it more who knows >->;

I came up with 7 different minigames yesterday because I was just doing a lot of brainstorming but the two things I'm probably going to do is have the player be able to take care of Avery's cockatiels ( They have two) and also be able to meet their neighbors.
I'm in the process of fleshing out Avery's neighbors so I'll spill more beans about them tomorrow maybe? Or just some other time this week.

Anyway I think that's about it for now! To everyone else participating in Ace Jam I wish you all goodluck! C: And don't forget to take breaks when working!!

Man it's almost been a week but here's devlog #2 for the acejam game!!
The past week has been very exhausting so I've been kinda sluggish and meh, but!! I did like try sketching some characters last week and finished planning out the little minigames I'm going to include in the game.

Not only that I started working on the script  today!!!>:D  Not that this game will be a dialogue heavy game, but I'm still finally making progress!! 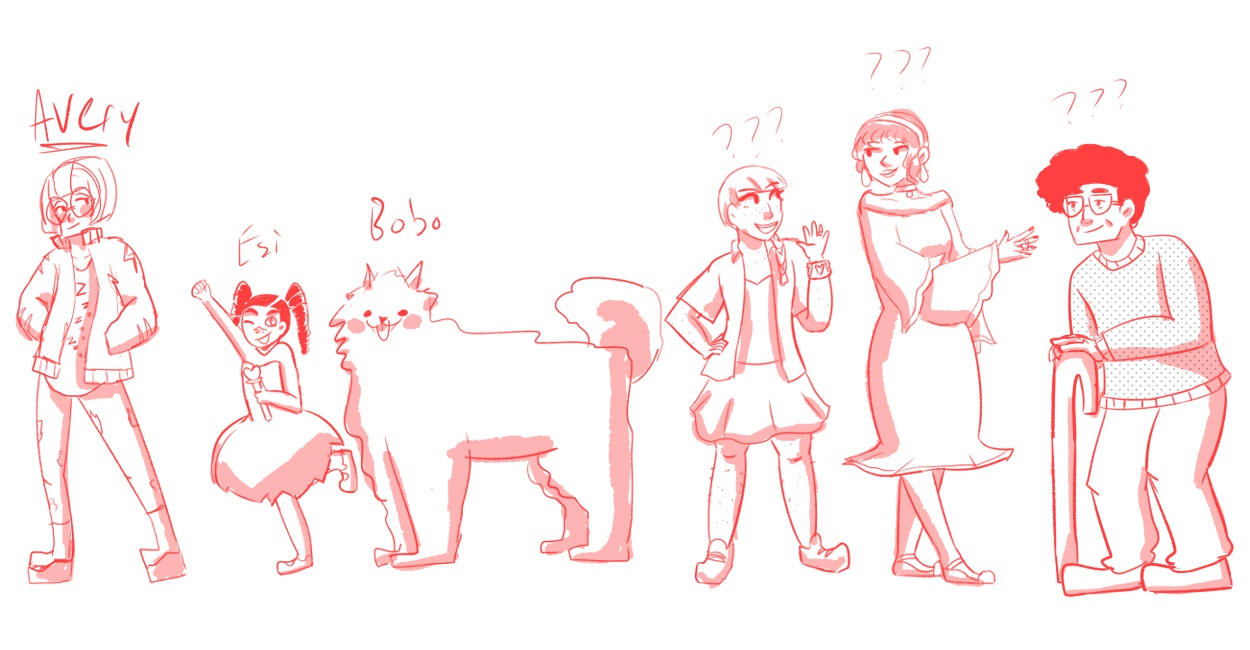 This is what I drew last week which is veeery subject to change but hey it's a start. I'm only going to talk about each of them a liiiittle bit since I am tired and I kinda want to keep what happens in each mini game a surprise??

Avery is the main character while all the others are their neighbors.
Esi is a little 7 year old girl living next door with her parents and her big doggy Bobo! She loooves Bobo and it's surprising to not see her with her dog walking alongside Bobo.
Next going from left to right after Bobo is Phoebe, Isidora and Moti.
(I created their names after drawing this as you can probably tell.)
Isidora and Phoebe are a married couple who are high school sweethearts!
And lastly Moti is retired and a grandpa with many grandkids who stop by from time to time.

I think that's all for this time since I'm so sleepy but I will post something better hopefully by next week!

Until next time, don't overwork yourself like I do xC
( Don't worry I usually get enough sleep I just need to take more breaks)

Oh dang it's been two weeks since I last posted a devlog and in those two weeks I've been busy with tests at school, I kinda got sick last week but!!

I finished programming what I still needed and ended up cutting sooome stuff because of the time constraint.
And cutting as in I wanted three minigames and a whole petting yr bird thing to be in the game but I don't have time so surprisingly I'm going to just have what I originally planned wow :0
As in:

On the bright side I have all of this week off from school! This week I'm going to be working on ALL the art assets so they are 100% done! And also the actual script for the game cause I started on it but didn't finish it >->
Main reason I'm worried about completing all the art(well the game as a whole rather) is because my school is letting all of its student get a table at this convention for fanfaire for free!! Which is really cool and all but now I'm trying to prepare art etc for next month sooo yeah.

The pixel art animations I'm gonna make another devlog for it on Wednesday.

To ensure I don't stress myself the heck out I drew all the emotes the characters will have tonight real quick so I just KNOW what to draw tomorrow on.

Anyway hope everyone's week is off to a good start ;v; 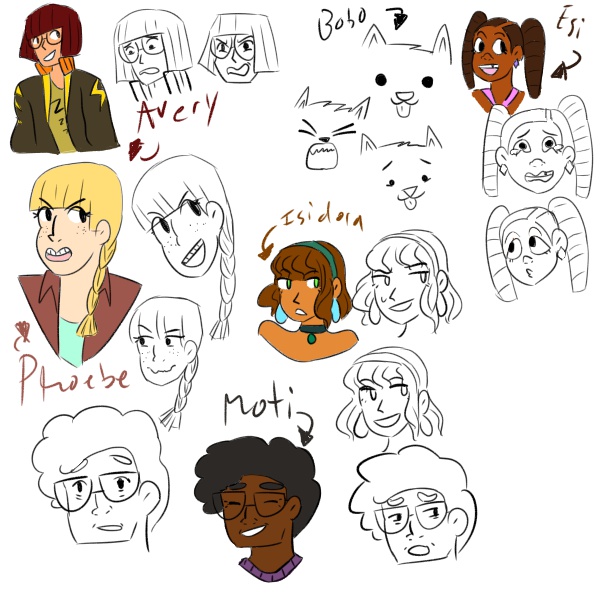 Yesterday was pretty productive and today was pretty ok until...Lunch time. Because there's not much food in the house;;; So I ended up napping and when I woke up I was waiting for my parents to come home with food so I didn't get back to work until after dinner around 8ish PM.

So the bad news is I can't do as many nice animations I originally planned since I lost time today and other things came up that are also due before Jan 31st :^( Which sucks because these are pretty last minute things.
ANYWAY! Onto what I actually did these past two days!! 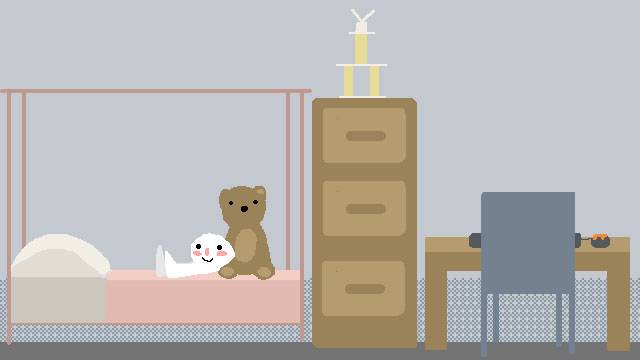 I worked on Avery's house and everyone's sprites! ( Although the talk sprites are the only ones currently completed)

The problem tho which is what I mentioned in the bad news is that I cut some nice art ideas. Everyone was suppose to have an idle animation. Now they just have one frame when standing ;-;
Avery's walk animation was supposed to be this (but finished and fixed a but more cause I was lacking energy when animating this)

But it's all to complete the game on time!! I may update it with *nicer* animations like I had previously envisioned at a later date.

And then. There's the script for the game that is like 10% done. I'm going to be fixing the full rough outline tonight along with finishing up the last bit of art assets as planned for today!!! So the next devlog will be uploaded on Friday(or Saturday) and I will hopefully be halfway done with the game or more so I can have people playtest it and give feedback!!

For now I'm going to get back to work. >-> Hope everyone else is doing alright!!

With only 3 days left I managed to have all of the script completed ( but its a rough draft) AND I have almost all the art done!!! Like I just have to finish up Isidora's talk sprites, draw Avery's cockatiels, and do a fewwww more background sprites >v>

It's gonna be hectic putting in all the sprites tomorrow but I'll at least be able to upload the game on Wednesday no matter what cause I'm so close to completion now!! ;v;

Here's a screenshot I posted yesterday for screenshot Saturday before I started putting all the text into Unity! 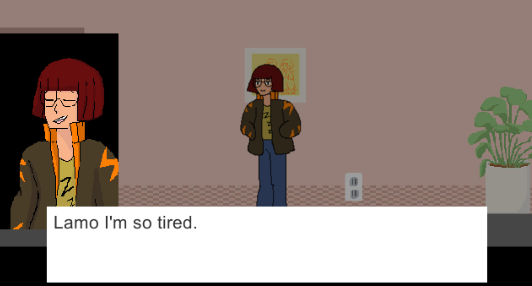 I wish anyone else still working on their games good luck and to take naps if you need one! ( I did today)

So I'm sure you're all wondering whoa what happened??? And like school happened along with other important things I had to do first thus delaying fixing stuff in this game.

This is all because I wanted to be all like " I wanna make a game where you walk around and talk to people and it's all chill BUT theres little mini games you can do!" And I mean this stuff I wanna do just to experiment with certain things and learn new things I can program in unity.

It's pretty unfortunate I didn't make it by the deadline and I'm p sure I'm going to submit this almost  whole month late!!! There's a bigger project I'm working on and I'm preparing something special for the said big project and that's kinda why I've been so slow with this because it was meant to be a small easy side project.
Furthermore some of these gosh darn bugs I was NOT expecting like the animator was bugging out like crazy :C

Next week though I have off from school again so this will either be completed next week or the week after and I'm betting on the week after because I have to prep for a convention at my school. So expect more news before February ends!

Until next time here's a screenshot of the game again because the gif screen recorder was lagging. 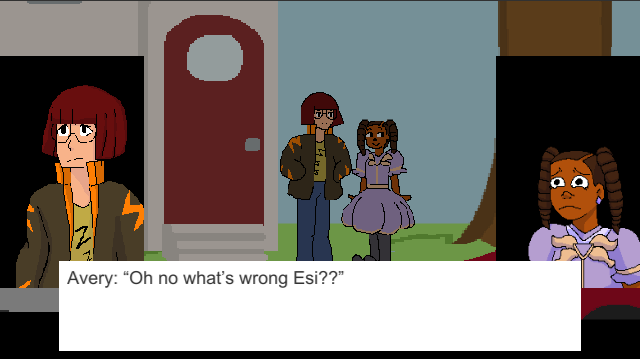