A deckbuilding, dungeon-crawling coffeebreak roguelite.
Submitted by Wisedawn — 1 day, 8 hours before the deadline
Add to collection 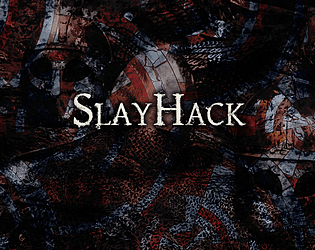 This is a fun take on the roguelite card game.  It has a number of unique mechanics going on.  It would be nice to be able to use cards on self without having to drag them, maybe a ctrl-click or other button + click command would be helpful.  It would also be helpful to be able to see unmodified stats at times, it can be difficult to weigh decisions on passives such as armor when you are wearing several pieces which are all modifying health, armor, and hunger stats.  I noticed that after defeating the boss, you can keep playing except the levels are not in order.

It seems that there isn't actually a deck, and you just have an equally random chance of drawing every card in your deck, regardless of whether it is in your hand already, and that there is no discard pile.  This completely changes the balance of a typical card game, and leads to some interesting consequences.  For instance, I was able to "break" the game by cutting down the deck to a single attack card (which I could draw as many copies of into my hand as I like), and then other cards which could be played freely outside of combat.  See the images below for an example.  This could have been done better with just Steak++, Health Potion++, and Amputate, I think.  It essentially creates a nearly-infinite health loop, going on until your hand fills with combat cards.  If enemies scaled more then this could be stopped, but that would probably punish "normal" decks moreso.  I eventually let my character die so I could end the game and see the stats, otherwise I'm pretty confidence that this could have gone on forever.

By the way, this game has enough cool and unique stuff going on, that I hope you would decide to change the "plot" to something more original if you continue development.  As I'm sure you are aware, it currently has nearly the exact same plot/story as Slay the Spire, being in a dream/nightmare and fighting a heart.  I think it's a nice homage to StS but this game could really stand on its own. 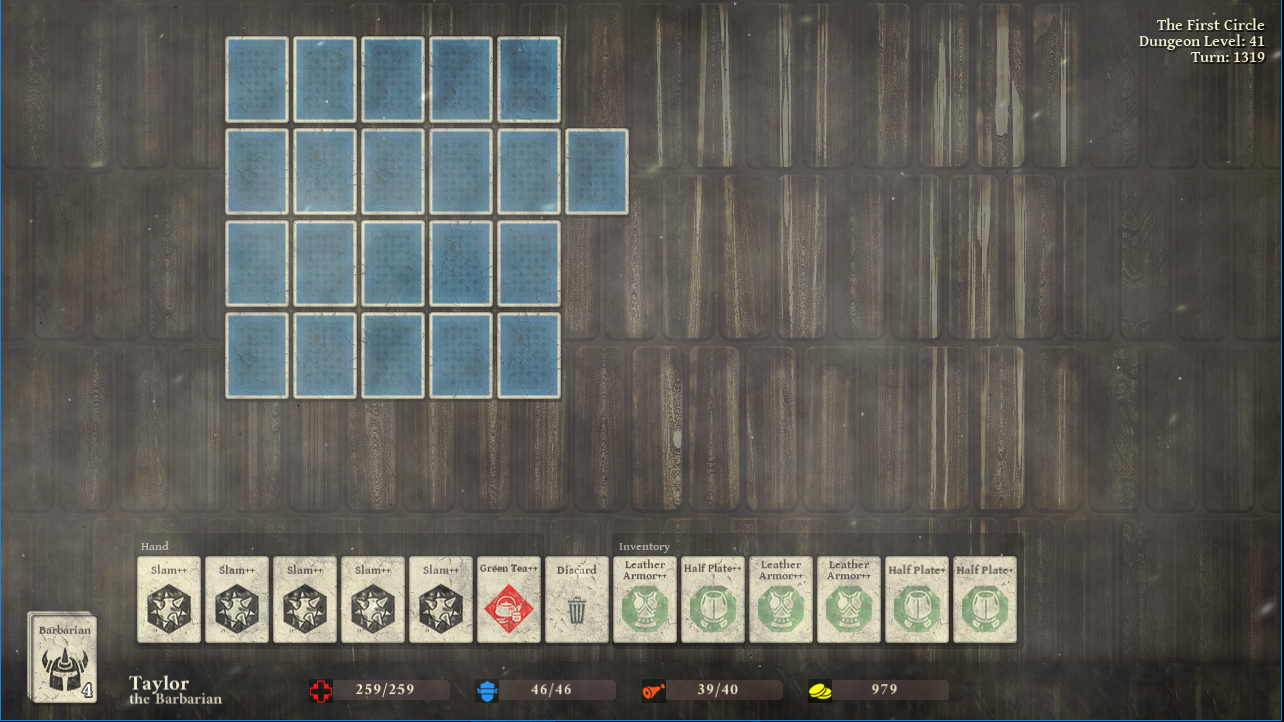 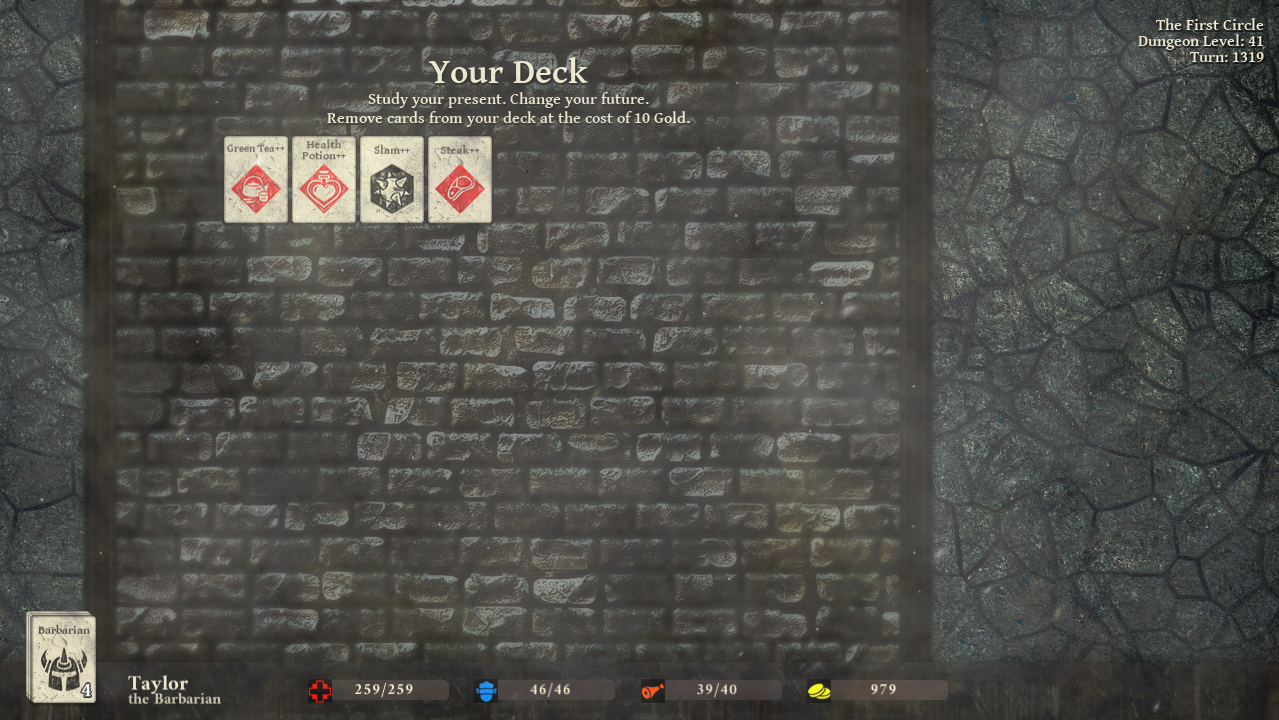 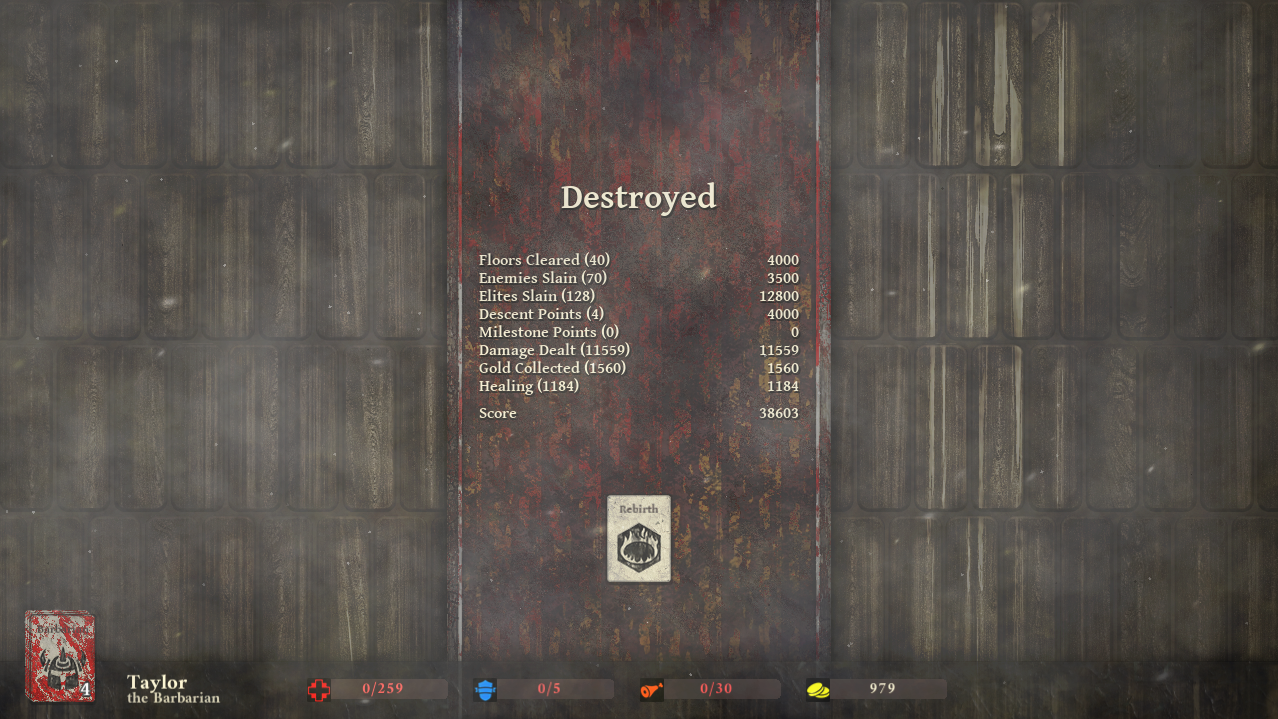 This gameplay concept is awesome! I also very like this non-colorful graphic style. Is it inspired by some other titles (except Hand of Fate I did not like)? It would be cool to have such basic options like turn off music (not all sounds) and full screen mode. Is it going to have content updates? This game has potential to be sold for a small price and having mobile port. Keep up your great work. I will recommend it to my gaming friends who like roguelikes/dungeon crawlers/card games.

Thanks for your kind words! I intend to add an options menu in the short term; for now you can manually change it using the volume mixer of your OS (I know it's not ideal, sorry):. There will be content updates that add new characters (three planned), monsters, skills, traps, better balance and more. Right now the plan is to have the game available for free. As for inspirations, Cultist Simulator is an excellent title with a similar art style.

Yes, I already used OS mixer, but would prefer to keep in-game sounds except music. There is also problem with music loop - it plays for a short time (less than a minute or something like that) and then there is unexpected gap for few seconds before next play. I did 3-5 runs with Tactican character and reached level 10 with heart boss (yay!), but had no idea how to win with that one to pass further, and yes I had upgraded deck with nice new ++ cards. Traps are things that I was also thinking about - when you found one, then small damage (not sure about mechanics how to prevent this, maybe some skill card to detect 1 trap card). The game started to remind me Runestone Keeper (nice minesweeper roguelite) and by thinking about it, you may consider mechanic to add cards with keys in the dungeon or on random levels. Keys can be used to open the door to the next level or open chest card with random gold or item card (one unlock skill card for rogue). Key could be alone card or appear after one of random enemy card is defeated. There could be also merchant card to buy only 1 of lets say 3 random cards. There is probably also save or auto-save option missing? More variety of enemies (vampire with vampiric drain to regenerate if no armor, and some enemy that attacks health directly with armor penetration) for levels 1-10 (I do not know what is later) would be nice update, since these ones are going to repeat often with each new run. Skill cards that come to my mind are memory card that resets all cards in hand, and duplicate card that duplicates chosen card in hand. Just some ideas that appeared during playing, because I just very like general mechanics of your game.

Great ideas! Some of them, like a spike trap and vampires, are actually in the latest version of the game but are currently disabled (the game needs a bit of tuning). There will be a mini expansion soon!

:( I have recompiled the game and uploaded an additional compatibility version. I cannot reproduce the error; can you check to see if the latest versions fix the issue you are encountering?

That one worked!  Thanks for the fix!