Its time we break away from these slums.
Submitted by Berry B (@BerryRPGMakerB), Joker101, Knightly44 — 1 day, 16 hours before the deadline
Add to collection 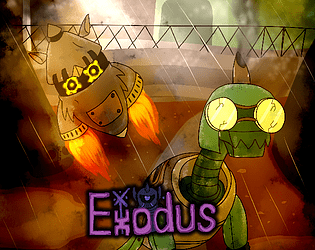 There were 2 design choices that really hindered this game’s UX: 1) textless story, 2) front-view battles. Having no text makes the game more universally accessible but also means that things need to be really intuitive or players are going to be confused. Also, this game would have benefited from a side view battle system so information the player needs would be conveyed more easily. Since you’re going with no text for this game it means the visuals need to convey everything.

I still liked the idea overall. I hope you all keep improving and I look forward to whatever you come up with next.

I will admit I was short on time when creating the game's overall UX presentation. We decided early on we wanted it to be front view to save time but didn't take into account the fact that the front view can't display the popup damage, to which I already noticed since Harold Tales Maelstrom Leviathan Disc 2. We were also shorthanded on time so we couldn't change it and my team suffered burnout from making assets so I have to salvage what little I can afford with it.

The intuitiveness of the no text rule is definitely something I'm trying to perfect. I nailed it with one of my projects but it seems this time I seem to miss in some aspects. But hey, its a learning experience.

I thank you for the feedback and your appreciation for the unique setting, the art the team has made and the unique title screen transition post-credits.

I don't know how you pull of wordless storytelling so well. Somehow I could feel a connection to the characters, although I admit I was a bit confused by the story. I think the opening scene flashed by too fast to gather what it was communicating, as did the ending scenes.

Combat was clever and challenging, though I found having to refuel so often to slow down combat too much, especially against the many many mobs throughout. I liked the challenge of the boss - I definitely picked the wrong enemy to target the first time around. Character sprites and enemies, I thought were really cool looking.

The title screen change is always quite cool. I love how you do that, though I started a new game and didn't see anything different. Did I miss something?

Seems as if the image transitions run by too quickly is the big contention of feedback that I noticed when having others played it. I might need to find a workaround for this at some point. The challenge and refuel constant usage are feedback that will be taken to consideration for future developments for gamejam entries, so duly noted on that.

The title change marks the end of the game mostly because I can't exactly create a new game anymore with time constraints and team issues at certain points during development. Hence why it ended up not amounting to much when starting a new game. However, that whole thing is more a teaser of what's to come for the future.

Thank you very much for playing the game and giving it a shot.

My favorite trick is to space the picture out with blank, transparent text boxes. Show picture, show blank message, repeat until done. This way the player is in control of when they will move to the next picture.

An RPG with no dialogue that still manages to tell a compelling story. I really liked the art style, though I kinda wish maps were more zoomed in. Character graphics were pretty small and blended in with the environment a bit too much. Also felt like maybe the maps were too large or just didn't have enough to do in them for their size. Mostly just pick up refill items and maybe fight a set of enemies and maybe solve a puzzle. It was a short game, but felt a little repetitive by the end. The boss robots (and their strategy) were a nice change of pace, tho. Overall, I had a lot of fun and really enjoyed playing this game. Thanks for making it!

Thank you for your feedback. I was trying to implement a zoom feature so the focus would be on the characters but time is not on our side. In addition, this collaborative effort barely makes it out into the public eye, so adding more would have been a struggle with the project's pipeline nearing its end and some of the team struggled at the tail end of the production.

The repetitiveness and the maps being too spacious and less to do are noteworthy feedbacks and will keep this in mind for future developments.

Goddammit, B! Why all of your games are connected each other?

Overall...I like this game despite that I kinda hate when there's HP drain overtime.