When I launch They Bleed Pixels from the itch.io desktop app, the memory usage of the butler.exe process as reported by Task Manager immediately increases from the norm of under 50 MB to about 2 and a half GB. This memory stays allocated until the itch app is closed; simply closing the game doesn't help. Launching the game a second time without closing the itch app causes another allocation of the same magnitude. I wasn't able to replicate this behavior when I tested a handful of other games (WitchWay, Dujanah, 9 Till Void), but I'm not certain what about the specific game might cause this problem. The abnormal memory use occurs whether or not the itch sandbox is enabled.

I had the same problem as above, and i am the user in the discord chat.

I’m not familiar to how Butler works, but assuming that it is running the games itself, could it be that there is a memory leak in the game and not with Butler?

If you open a different game, does Butler’s memory usage change?

They Bleed Pixels dev here! This is a mystery to us as well. I'm able to replicate the issue, but it doesn't seem to happen if you run They Bleed Pixels from explorer or run the Steam version. I just asked the programmer if he has an ideas of how this could be happening, but it appears to be on the itch side and not something on ours from what I can tell.

itch app maintainer here, that’s my bug (well, one of the dependencies, but let’s just say it just became my bug), I’m looking into it at the moment.

Memory usage is back to normal:

Everyone will eventually be upgraded to butler v15.18.0, but if you want to force the update now, you can do so from Preferences => Advanced => Components => Check for updates 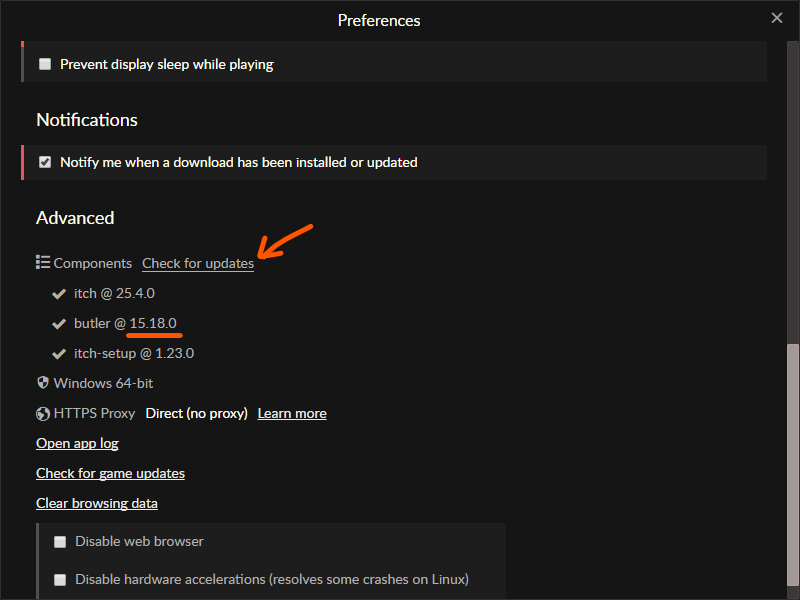 Indeed, it worked for me too, thank you!