Fan made coding and clothes - released

The hat system is now working, if anyone would like to give me ideas, want the code or would like to contact me elsewhere if i'm not around, add me on discord Lethys#2970

To get the hat system ready I have had to made a few changes with how the layering of the images work:

Things I plan on doing (If I'm not being too ambitious)

Note to Nanoff and Minoh : I'm not sure how headwear would work with this to be honest, I think they will visually clash (not that there will be a layering issue, just visually) with each other depending on the headwear/hats so if you do decide to put hats into the game at a later point you may face this issue.

On the subject of giving Asterion a hat, the main thing holding us back from doing so is the way his horns are layered, really, since the layering usually goes

Asterion's horn shape will be customizable in the future (though there are already sprites for this) so it's a layer on its own.

Adding headwear like hats or crowns becomes an issue because for most of his sprites, it would have to rest between the horns, so we'd have to split the horn and horn accessory layers into two, so

It's... kind of a lot. And there's an additional complication: remember when I said "most of his sprites"? The layer order for the front facing sprites would have to be the same as the original, or else the hat would clip between horns. An alternative would be to have all the front facing horn sprites on the back horn layer and not render the front horn/accessory layers if asterion is front facing, I suppose.

And that's not getting into the trouble of shaping the hat to acommodate all these horn shapes. So, it's doable, but very complicated. You have our blessing to try, though.

I've already viewed the code and found some humorous comments, and some interesting finds, your secrets are safe for me :)

Echoing what nanoff said, go right ahead and have fun! Modding the game is alright with us.

Thanks for the blessings from both of you <3 if you want the code just ask at any time, i'll post about what I've done in this thread

Update, created most of the asset art for a single hat, my only issue is that i'm struggling with the code, I keep getting an error when the game tries to load asterion on the screen, getting this error:

I've inserted everything that other assets have, but it doesn't seem to want to work. does anyone have any idea?

Hey Kentas, what you're bumping into here is one of the big issues the sprite system I set up has.

There's a workaround for this: you'll notice an "after_load" label in script.rpy. This is a label renpy jumps to right after loading the game, and then it jumps back to the spot it was just in when you load the game. You can set Asterion's new attribute here.

There's an example laid out for you right there: Asterion's chlamys (the cape he wears starting on chapter 18) needed to be added for build 0.5. You'll notice that on line 77 (at least on the file I'm working with) the following happens:

First I set the chlamys attribute, then I add a chlamys category to the wardrobe object (which is used on the screen where you change asterion's clothes), and then I make the Asterion object reset filenames. If you added a headwear or a  front/back horn filename attribute on the resetFilenames method, this is where that happens, and now the sprite knows which subsprite to load.

Also yes there are WAY better implementations for this. First of all the fact that wardrobe doesn't have a method for adding a category is fucking nasty and I have no idea why 2019 me thought that was ok

Awesome, thanks for the information, I was banging my head against the wall for 4 hours last night xD

If anyone is interested, here is a preview of the hat I've made, the flowers are based on endemic flowers from Crete called Tulipa cretica :) 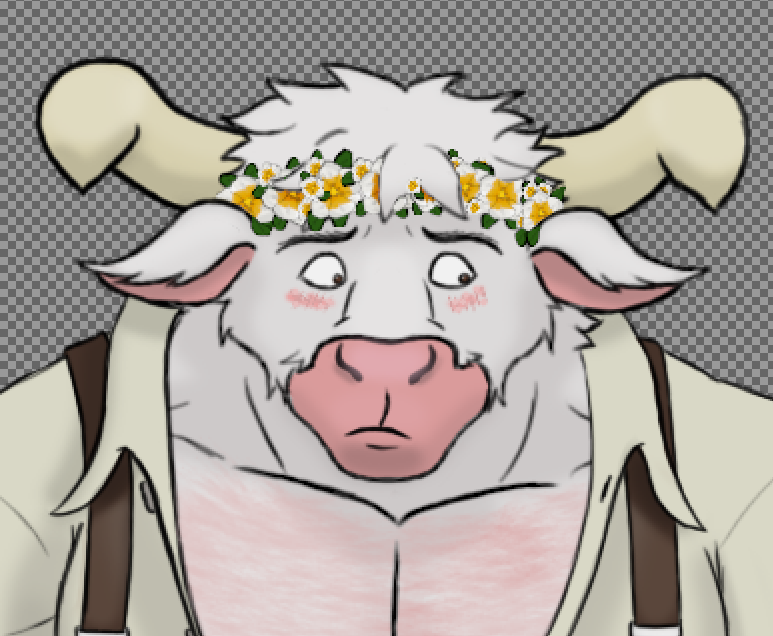 the eyes named something which I don't see unless he blushes, took liberties of adding a (blush effect, just for the preview) 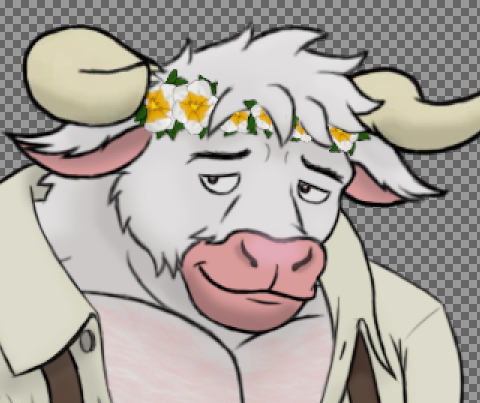 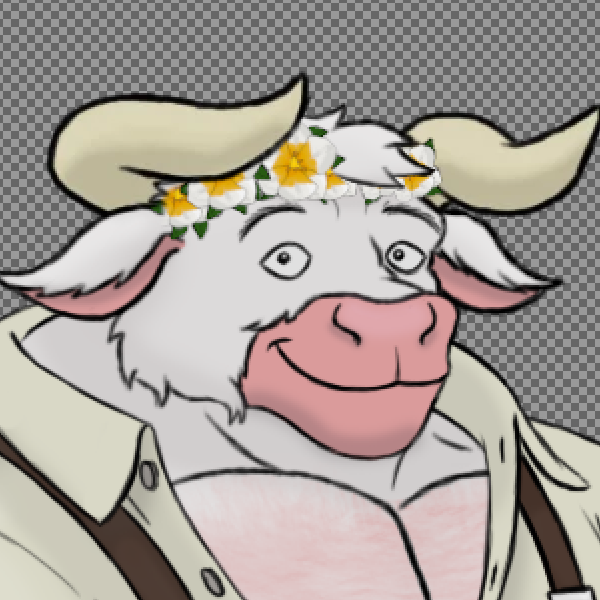 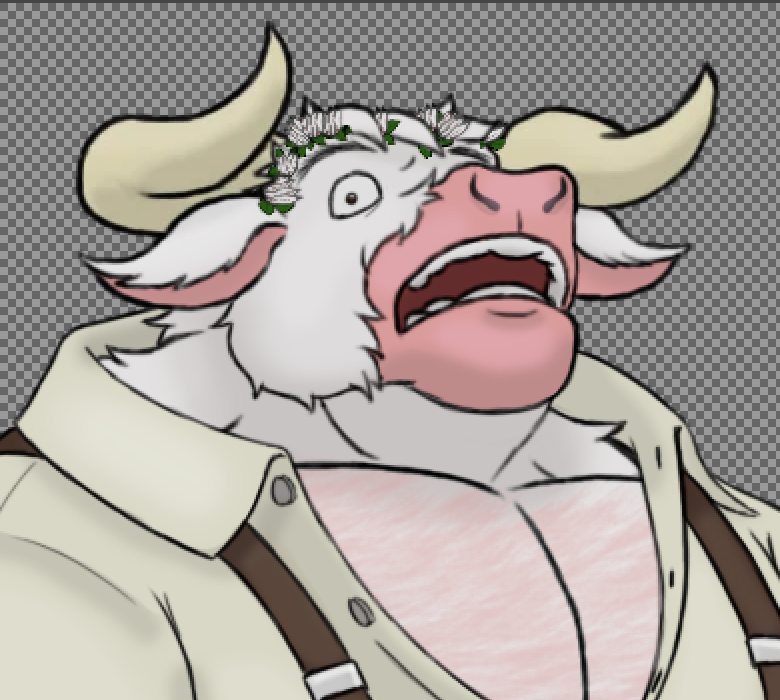 this one was a nightmare to do due to the head being thrown back in surprise. it looks a tad ugly

Thanks :) now all I have to do is find a way to put it into the wardrobe

you now understand a fraction of my pain

All of this was done with a mouse, not too sure if you had a tablet or not but the perspective on that was so silly, I do not envy the amount of work you had to do to get this far ^^; 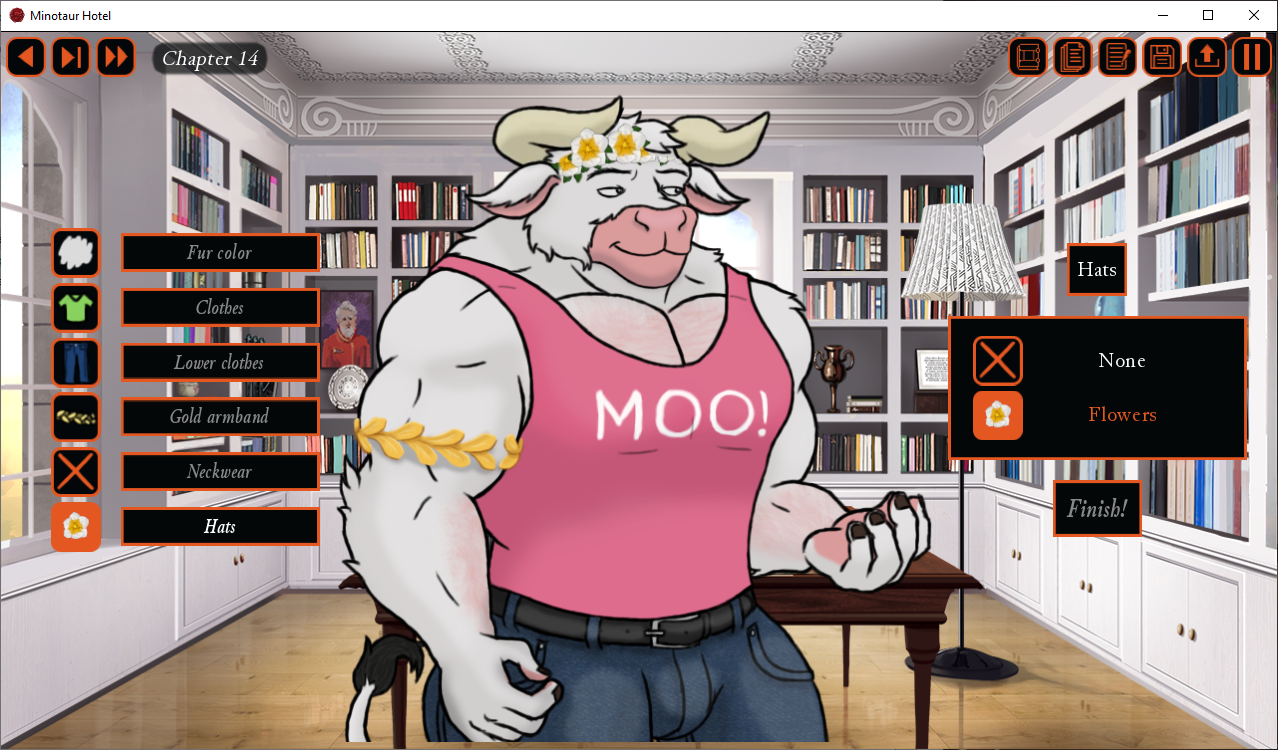 Fixed the issue of Asterion floating above the bottom when equipping the flower hat, turns out the layers of the flower crown were outside of the image which seems to effect the character's positioning since I'm assuming the character's default position is fixed to the bottom of the screen. 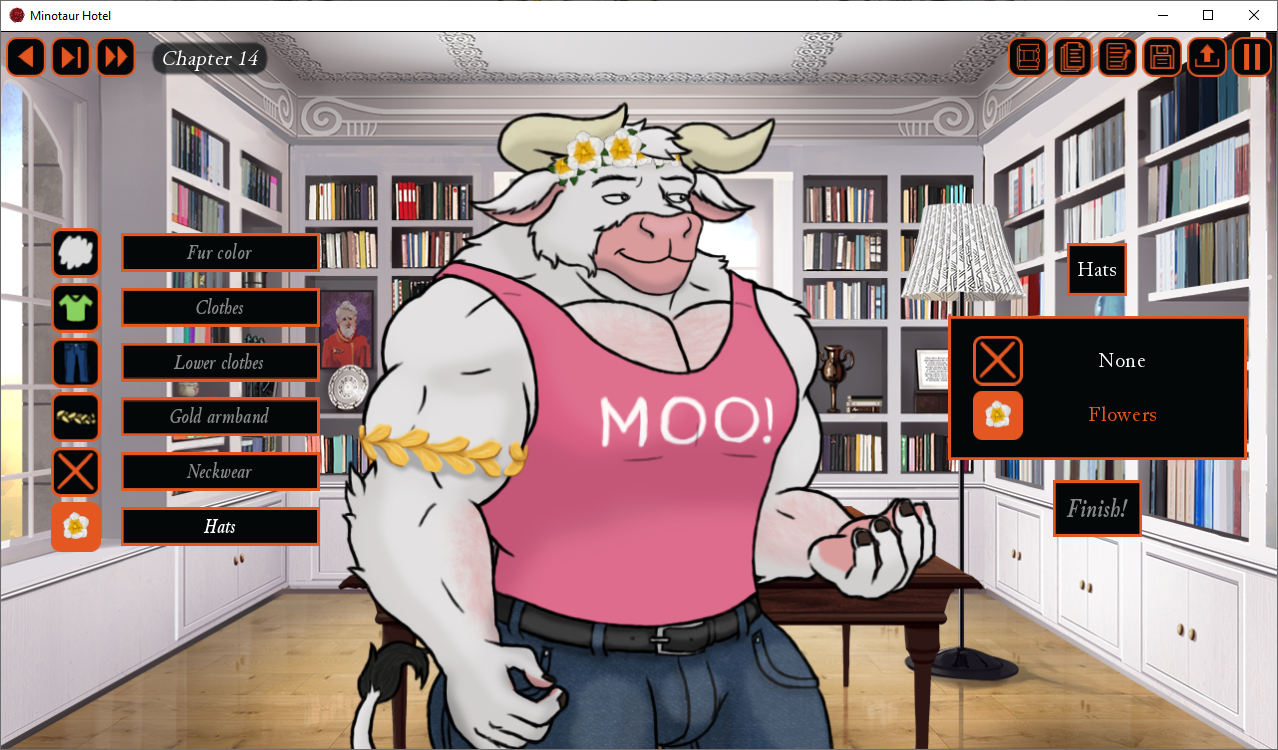 Made it for a silly joke on the clothing suggestions thread for a hoodie, but may as well put it here, I may make the other poses at some point. 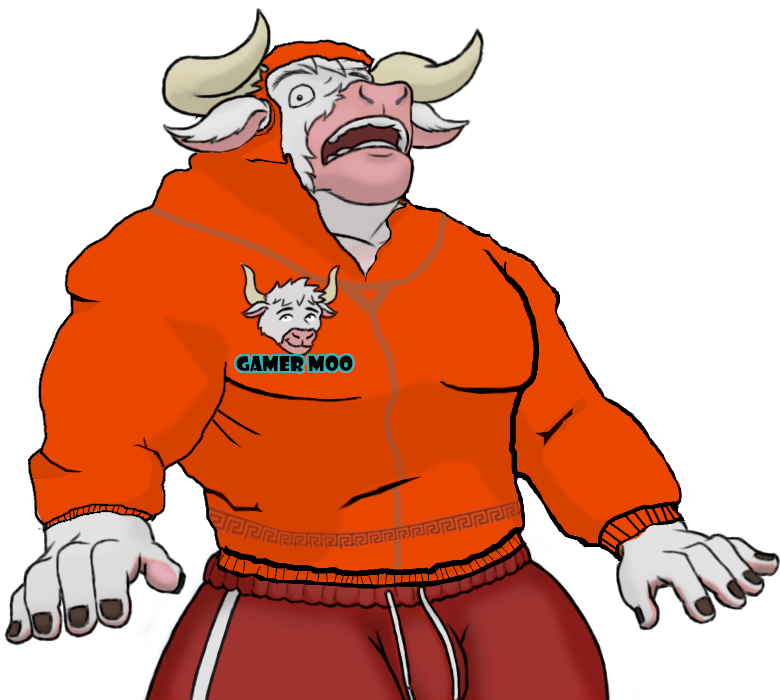 Wasn't a fan of the icon and text, also tried to thin out some of the lines 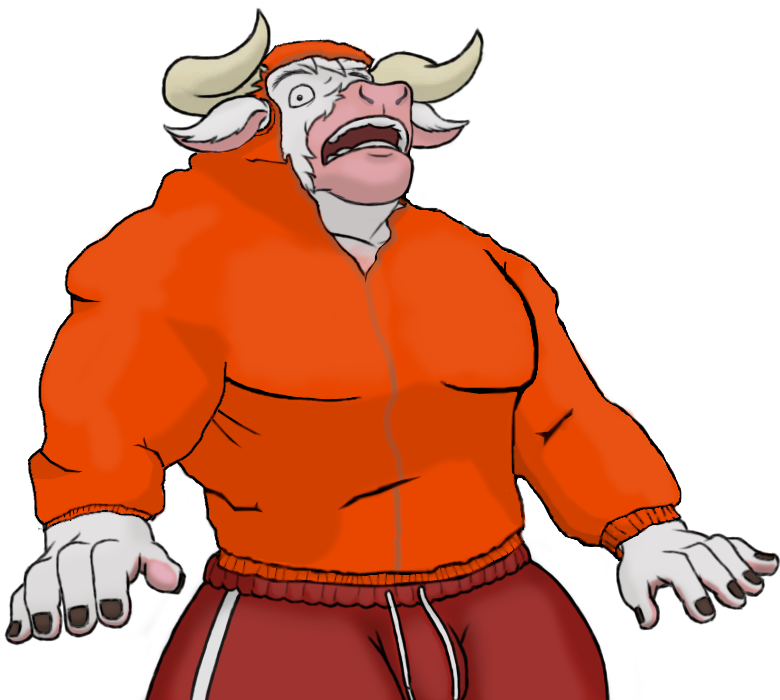 Secret achievement, infect the moo into a being that is beyond the reach of the Labyrinth's torment. Secret Speed Runner ending.

I was talking with the team about this thread, and I'm leaning on sharing here some thoughts touching on the flower crown mod Kentas is doing but mainly modding as a whole.

When we started Minotaur Hotel we went back and forth on whether having people mod the game would be a good or a bad thing. For a while we leaned on them being good, because modding is almost always a positive force in a game's community, then we weren't too keen on it because we realised it could have a chilling effect on other games being made.

Ever since we released Build 0.5, however, it's become abundantly clear just how mature, thoughtful, creative and smart this community has become. A little exploration of the forum should show that well enough.

So, for anyone coming here in doubt on what's our stance on modding, we're ok and happy with it. It means a lot that Minotaur Hotel has become the sort of game that motivates people to mod in neat ideas.

If you, unknown reader, would like to make a mod of your own but are worried about it being ok or not... Well, if you're adding cute stuff like Kentas' flower crown or hoodie, that should always be alright.

If you're going for something spicier or kinkier... That's mostly good too. Evidently we are connoisseurs of the adult content ourselves. At the same time we'd rather people not go too far. I'd rather not put any hard rules at this moment, but as a general rule of thumb we'd just like people to avoid extreme content. By that I mean scatological stuff, gore (what's already in the game is arguably too much already), that sort of stuff. If you're in doubt you can just ask in the forum and it shouldn't take long for us to give you an answer.

In case more people jump into modding I'll setup a pinned thread for it.

Thanks for the clarification, and thanks again for giving me permission to mess with the game, it's been a blast :)

progression of the holiday outfit, it feels a tad awkward trying to make loose hanging sleeves for the buff boy, but I think I'm getting a hang of it (holiday hat coming soon) 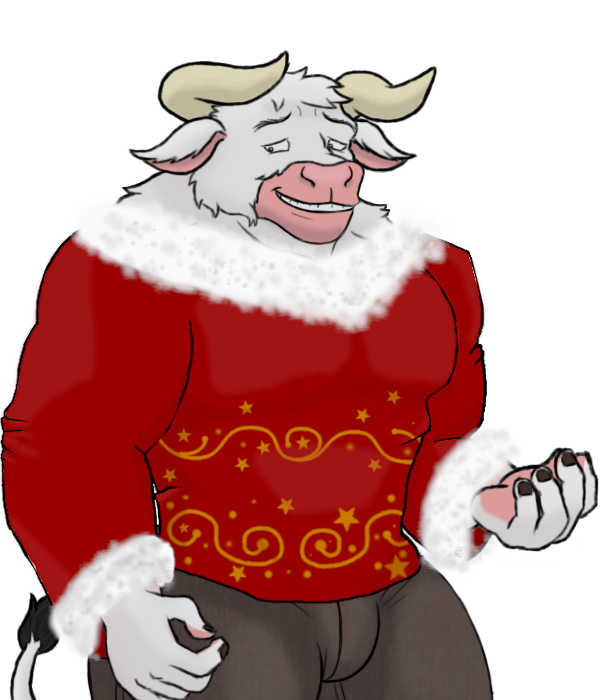 This December, all we want for Christmas is moo

Hat is complete, might touch up before putting it in the game though. 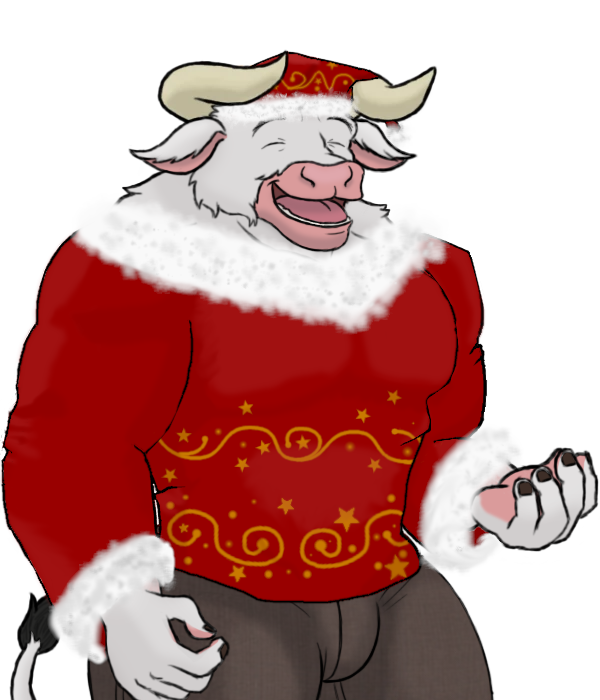 Edit: just realised that this won't work as the hat draped over the horn will mess with the other horn types x.x 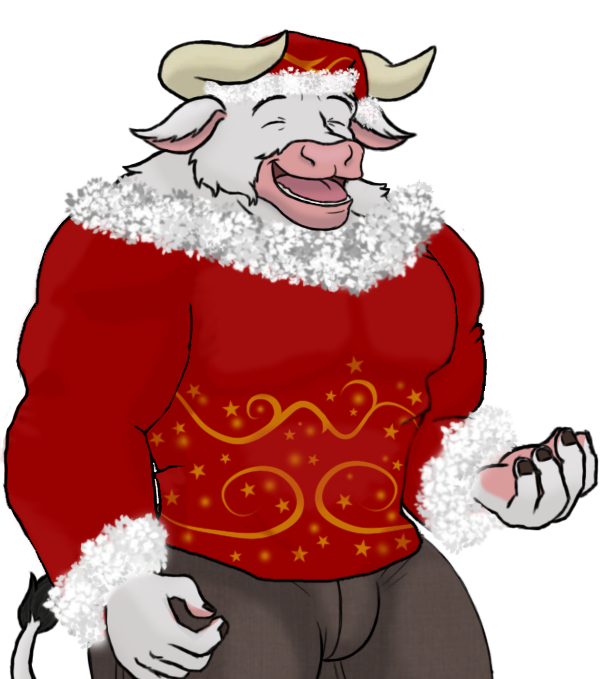 Hunched clothing draft is now done, might update the neutral version's golden lines and white fluff to mirror the quality of this one. 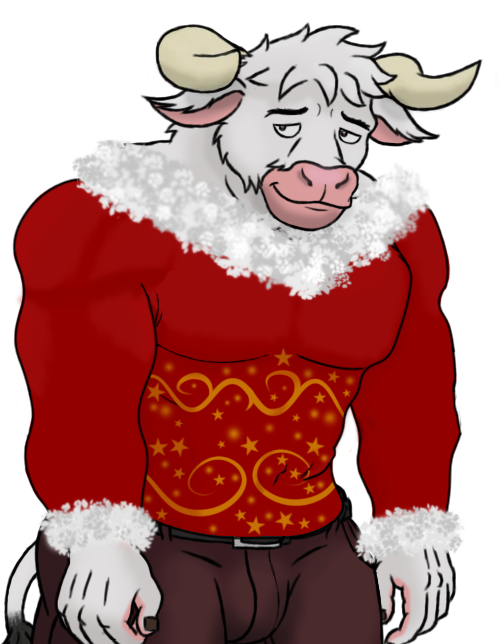 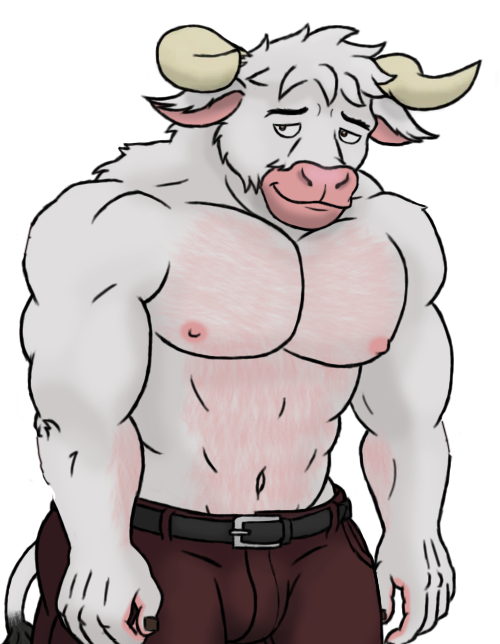 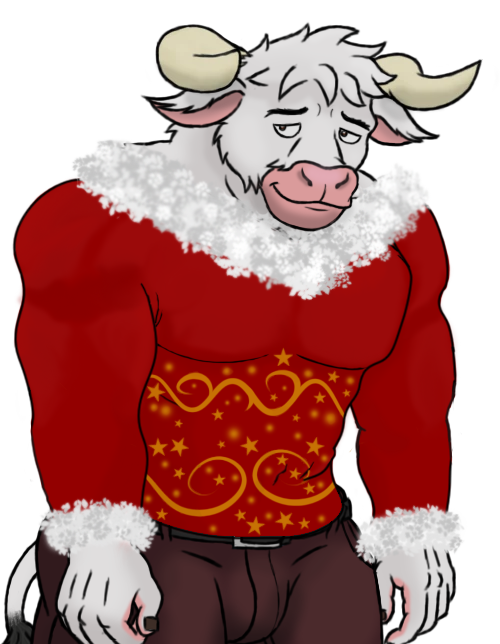 This might be rather presumptuous of me, but would the Dev team consider adding atleast my code and changes  to the layering system that allows hats to the next build? From what I hear it's content will be focused on side characters and would probably be easy to insert the code in without causing issues since it the build won't touch Asterion too much.

I can give it a shot! The current status of the update is, we have plenty of new content written but nothing edited and ready to be added to the game yet. So I'd currently have the time to add features like this if it weren't for irl stuff clogging my schedule really hard. Thankfully I'll have more free time soon, I'd love to add this to the game. You wouldn't mind if I redrew the crown using yours as a basis, would you? So it's consistent with the rest of the assets.

*also whenever we add cosmetics to the game we prefer if they aren't dropped on the player's laps and there's an exploration or R&D event tied to them, so we'd need to come up with one.

Ofcourse I don't mind you redrawing it, could we discuss this further in a more direct method like discord or skype? (if discord, my info is in the first post) It'll allow me to send you everything privately when you're ready to implement it

*not sure how you could have a flower crown an exploration and R&D option due to lore reasons of being unable to make living things and that any life from outside will attack Asterion, but it could be a human guest who brought flowers in the hotel and crafted it into a crown for Asterion

You know what's funny? Flowers are a religious offering in certain faiths. Then there's the whole Robert saying Asterion's divinity and cthnoic nature have been bled out of him....

That's why I picked them, they are also specifically west cretian flowers called Tulipa Cretica :)

Mod on pause until further notice, not sure what to add at the moment considering the hat portion of the mod is most likely going to be implemented into future builds

I want to keep adding stuff to the game but I've ran out of ideas on what to do so I'm going to ask, is there anything the dev team needs help implementing or adding to the next build? I've got a weird coding itch that I just cant scratch xD

Just giving this a slight bump just to make sure no one forgets about the mods addition, I forgot how long it's been since it was last active

I just noticed that I have not actually given out the mod.

I've kept in the code that alters the fur on the arms if you decide to mess about with sleeved clothing options.

there is a readme that tells you how I've layered the horns on the off chance anyone other than the dev team wants to make their own hats.