Hush - A free conversational micro-RPG about paranoia and community 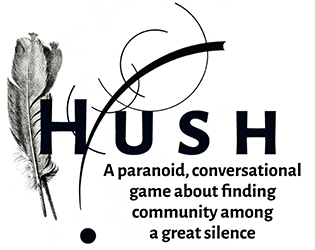 Looking for a new kind of micro-RPG for your tabletop gaming group? Set after a poison in our words themselves has caused society to gradually unravel and fall largely silent, Hush sees the players struggling to forge a new community among strangers while trying to avoid the fate that has already befallen so many.

You can get the game here: https://atypicalfaux.itch.io/hush

From the title of this thread, I thought this had great potential to be a conversation starter on the dilapidated state of mental health-care provisioning in certain parts of the world (like in mine, the United States of America), but after reading the blurb, I realized this wouldn't be the silver platter we need... well, at least there's that thought.

Here in the USA, we have a domestic terror incident every other day. A major one every month, and sometimes two in a month. At the end of the day, the usual suspects for the motive behind the incidents is always "mental health issues": "s/he was paranoid", "the signs of them falling apart were right there, but nobody saw it", etc. This despite the fact that we're swimming in a sea of guns with no serious efforts to control mass production and no attempts to restrict who gets to buy what.

Sorry if the title seemed to be biting off more than the little game itself does. Hush is just a refinement of a 200-word RPG contest entry that I gave a layout to. I wanted to use the short word limit to make something that tried to balance a need to connect with deadly limitations on one's ability to communicate. I guess, when framing it like that, the metaphor you're looking for is there, but barely. It works more broadly, I think, as an analog for any situation where someone wants to connect but is impeded from doing so, whether from within or without. A project directly addressing the massive ongoing mental health crisis in America is, unfortunately, a task beyond my experience and skills.

To be more precise, the constant march of gun violence in America is a nexus of many interconnected issues, including the lack of accessible mental health services, which itself exacerbates the many other causes, such as extreme social and economic stress and alienation, structural racism and individual prejudice, patriarchy and toxic masculinity, general and specific disenfranchisement, easy access to firearms, gaps in education and empathy, political powerlessness, the dismantling and destruction of community, the devaluation of life in general (and the role that the violence of police and incarceration play in that), etc.  The various and dynamic causes are part of the reason why the issue is so difficult to tackle, second only, maybe, to the complete lack of will among the powerful to actually change anything.

Hello, I like the format of the game but found two difficulties :

1 - that the Silencer gives the token "soon" is hard to swallow. The elasticity of that is crucial to the game. I suggest reframing the whole situation (5 minutes, 8 tokens, "soon"). Maybe count matches and speak while burning a match or something like that. Or make the clock a diegetic thing, and an ominous signal "when the bell has rung thrice". Defining the window of opportunity will put clothes on that mechanic and serve the "ambiental" purpose of the game.

2 - that there be many "community" dice strikes me as strange. Why not have one "common" die ? Why make it a die ? Here again, leaving game logic to enter *this* game logic would probably add to the experience.

And with all that said, the game is very evocative. That random people on the internet want to make it their own ? that's a hint it's actually good !

Regarding "paranoid", it's technically distinct from "paranoiac" : it looks like paranoia is all it says. But it might be a bit strong a word for the kind of "feeling one's way" conversation style the game will create. Do you have paranoid" play experience or feedback ?

Hey, thanks for the feedback! These are all good points, and I'll try to address them individually.

1.) The guidance on when to time handing out tokens is non-specific to help prevent the Strangers from easily deducing what words are poisoned and, about as important, to give the Keeper of Silence at least a little more agency and stuff to do. The Keeper really only has two levers to pull the whole game: decide a word is poisoned and time when to hand out tokens. If the timing was more automatic, they really wouldn't have much to do.

The hope is that the flexibility will both keep the Strangers paying more attention to the Keeper (at least in the back of their mind) as they talk and keep the Keeper invested in the beat-to-beat unfolding of the Strangers' conversation. Allowing another player (the Keeper) to have agency over how tokens are doled out, within reason, keeps the Strangers from off-loading that concern from their considerations during play. Even as they start to figure out a pattern, it can change.

There are other options that could definitely be more thematic, but I also wanted to limit components as much as I could, since Hush is already relatively component-heavy for a micro-RPG. I'm open to other suggestions to maintain the considerations and tensions described above without adding more components, though.

2.) The decision to have multiple community dice was twofold. First, I didn't want to require a whole second set of tokens to track the community progress, and people are much more likely to have a few dice than a second type of tokens. Second, I wanted each Stranger to have their own community die, instead of one singular one that everyone contributes to, to ensure the new community is only formed after every surviving Stranger is able to fulfill others' desires and contribute to the community. Thematically, I didn't want half of the Strangers to reach the goal of "forming a new community" for everyone without the other Strangers contributing.  You need everyone's participation to form a community. Perhaps there's a bit of disconnect with naming them "community dice" and everyone having their own... Perhaps something like "contribution dice" would be a better fit?

3) The paranoia is admittedly more for the characters than the players, so maybe it's not the best for the marketing copy about how the game feels. As a micro-RPG, there aren't really enough stakes or competing interests for much paranoia at the player level.  But I would classify the experience of the Stranger characters, who could drop dead at any time and are gradually coming to the conclusion that it's due to (some) of the words they speak killing them, as fairly paranoia-inducing. I don't know that "paranoiac" is different enough or specific enough to fit, but I'm open to other options.

Thank you for your kind reply.

The answer to 1 is to get rid of the Silence Keeper entirely, it being the weakest player role in the game. This can be done simply distributing Poisoned words among players : say / don't say.

Regarding components, it sure would be cool to be able to play Hush in a car or around a campfire, but there needs to be a warrant that Poisoned words are not declared on the fly, and that means written words. (limit case : picking a pebble and a twig make all related wood and rock words poisoned - why not ?) As soon as you ask for paper and pen, you're in another configuration. There is a possible development for the game in print and play with ready made cards implying a setting and situation. If one objective is to limit components, people can count bars and crosses or draw a hangman.

Regarding "community" it's nothing decisive but yes, "contribution", "participation", "hope" or anything like that would make it clearer for me.

I don't want to deviate your game release thread more than that. The are probable better places to discuss, like forums or something, and that's if you want to.

Thanks for the ideas. If I do a second edition, I'll consider how to best make it GM-less. That'd probably be a good addition.