The Infiltration of Citrus Fortress
A classic Roguelike with a 🍋 twist for the 7DRL 2020 Jam
tonyrobots
Role Playing
Play in browser
Blerx
These BLERX ain't gonna blerst themselves, now are they?
tonyrobots
Action
Play in browser

Thanks so much for playing, and for the thoughtful feedback. Couldn't agree more -- my goal here was to get as much of the basics done in a week as possible, to learn how the systems work and just to be a better coder in general. Also agree the game isn't well-balanced; you really don't have a chance against the tougher monsters, and even if you do manage to beat them, the reward isn't commensurate with the difficulty. Again, really appreciate you taking the time. Looking forward to next year!

Agree, loved this one.  Very elegant mechanics that make for a pleasing learning curve and a truly fun experience.

Yes, I certainly concentrated on features during the seven days, and didn't spend as much time on game balance as I would have liked. My plan is to introduce a few more tactical options in order to mitigate the toughness of those monsters -- i.e. not reducing their numbers so much, but rather giving the player more tools to employ. Thank you for playing, appreciate the feedback!

Is it possible to gain luminosity? Haven't seen that yet.

One of the standouts of the jam, IMHO. Do yourself a favor and give this a whirl.

Really enjoyed this! Would be great if there were some way to see the effects (bonuses & 'corruptions') on the enemies during the dungeon phase, so I could lead them to the appropriate hazards. Would help tie the two phases together. Great work, though -- really fun and original!

Also had a few crash bugs (one is attached.) Such a cool idea, wish I were able to play a bit more! 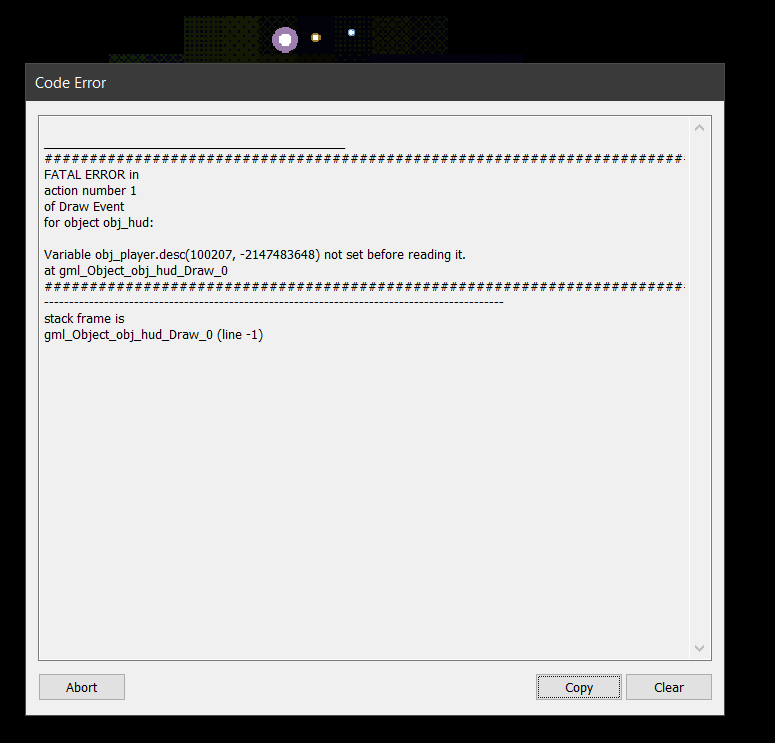 The monsters spreadsheet is here (along with the rest of the source) if you want to take a look...(n.b. those last 4 fields aren't used yet.)

Hey, thanks! I implemented a CSV parser for monsters and weapons with all the relevant stats, making it easy to create new content just by dropping data into the spreadsheets. Definitely need to spend more time on game balancing, those higher level monsters are basically impossible to deal with, and the reward for defeating one isn't adequate given the high risk (and the healing capacity required to use up.)

Really appreciate the kind words, and thanks for playing...

Also uploaded a mac build in case anyone prefers that to the WebGL.

Note that I updated slightly so that the regular number keys (not just num pad) work for movement, so that players on laptops could move diagonally too.

Hi Okoyos, thanks for playing! I caught that bug too just after submitting, but haven't quite tracked it down yet. It seems to happen fairly rarely, so hopefully it's not game-breaking for most.

Agree that the game needs some balancing -- those insta-kill critical hits from tougher monsters are brutal, and are pretty unfair. I need to add wearable armor, and also add some mitigation strategies to reduce the chance of getting critted.

Thanks again, really appreciate you taking the time to play and provide feedback.

Yeah, monster abilities were on my list but didn't quite get to it. Thanks for playing though!

Really pleased to have submitted The Infiltration of Citrus Fortress! It's a classic turn-based roguelike in the tradition of Angband, built from the ground up.

The game was a learning challenge for me. This is my first 7DRL, and while I'd love to have done something high-concept and innovative from a design point-of-view, I instead chose to try to implement a traditional RL from "scratch" to the best of my abilities as a new game developer.

Developed in C#/Unity, without the use of any external libraries, with the exception of the Dice Notation module from RogueSharp. Game logic is 99% pure C#, with Unity only used for the UI/rendering. Font is Pixel Operator by Jayvee Enaguas under the Creative Commons Zero (CC0) license.

In the end, I'm really happy with the work. The system is decently architected for expansion, making it fairly easy to add new features and content. My intention is to continue development, though I was leave this version here as-is as an artifact of the 7DRL.

Some features that made it:

And some that didn't:

That said, give me another week, and I'll get to those too!

Please give it a run and let me know what you think...thanks :D

Like the looks of it! Small frustration -- when I hit 'backspace' to correct a typing error, my browser ends up going back to the previous page and I lose my game. Is there something you can do to capture that backspace/disable that? (Though I was able to disable this in my browser myself, might help others.)

The Infiltration of Citrus Fortress was a learning challenge for me. This is my first 7DRL, and while I'd love to have done something high-concept and innovative from a design point-of-view, I instead chose to try to implement a traditional RL from "scratch" to the best of my abilities as a new game developer.

Developed in C#/Unity, without the use of any external libraries, with the exception of the Dice Notation module from RogueSharp. Game logic is 99% pure C#, with Unity only used for the UI/rendering. Font is Pixel Operator by Jayvee Enaguas under the Creative Commons Zero (CC0) license.

In the end, I'm really happy with the work. The system is decently architected for expansion, making it fairly easy to add new features and content. My intention is to continue development, though I was leave this version here as-is as an artifact of the 7DRL.

Some features that made it:

And some that didn't:

That said, give me another week, and I'll get to those too! Hope you enjoy. Please leave a comment either way. Thank you!

Wow, amazing for just 3 hours! I've played this game design before, but this is a nice implementation and the skyscraper graphics are a cool addition. Nice work :D

Reply
Finally Finish Something 2020 community · Posted in Stucked at 0 rates - would help me?
tonyrobots109 days ago

Yes, happy to...And thanks for the very nice review!

This is a pretty cool concept, feels like a prototype right now but I think it shows that the idea is worth exploring.  A couple of suggestions:
- I would add the concept of levels, and at the end of each level the store interface is presented. This way the player can shop without fear of getting blasted!

This was pretty fun, and the art works well. Definitely could use some additional mechanics. Zhong317 had some good suggestions in another comment. I'd also love to see some sort of progression mechanic; maybe you can buy/find weapon upgrades, traps, grenades? Also my tactic was always to strafe around the perimeter shooting inwards, and that seems to work well. (At least until I ran into some sort of invisible wall on level 4 (top left I think?) Maybe some sort of mechanic that interrupts that tactic so players have to change it up a bit.  Cool game though, nice work!

coming to a mobile phone near you soon!

Nice! I wish the enemies would bounce a little higher sometimes though :) Based on the comments I should check out Pang -- never heard of it. Really enjoyed this though, nice work.

There was a game like this for mac I used to play back in the 90s. It used its own scripting language, with operations in reverse polish notation (!). Super fun. Need to spend a bit more time with this one as my geometric functions are a little rusty. But cool concept!

Whew! I was afraid I was starting to lose touch.

I really enjoyed that. Is SPR_1F some sort of in joke, or just exposing the means of production? (For the record, it was on a 2nd playthrough.)

Really enjoyed this one...Was it multiplayer? Kind of felt like it, though I wasn't sure. Very innovative and interesting mechanic, with a pleasing, meditative flow. Thanks for submitting it.

I think blackjack was one of my first python games! Good learning exercise. Some notes:

- On player bust, you should end game immediately - player loses.

Very cool! Love this genre of games, and you executed it well. Really like the shop/upgrades mechanic between levels. Wish it moved a little faster, feels a bit draggy at times. Really nice selection of weapons. Nice work.

Whoa. Not my jam but it's executed well and is pretty polished.

What a bizarre game! The cute style contrasts  with kind of dark content. Kept blowing myself up with the grenade and had to give up.  Nice execution and polish, and the 3D models look great.

Fun! The unlockable characters are a cute touch.

Oh, interesting! Thanks for the note -- I think the cover image is cute but I am very open to any advice you might have. Really appreciate the message and glad you enjoyed the game!

This is my favorite game of the jam so far. Absolutely brilliant. Such a strong sense of style and atmosphere, and the roguelike engine seems quite polished. Love the tetris mechanic! Feels like a sly critique of inventory management in so many games. Will keep in my library and absolutely play some more. Well done, Ghast, you should be proud.

Wow, that's pretty hard! Opening cinematics were cool and evocative. First time through I didn't know about reloading, so that did me in. Might be nice to have a message when you run out of shots like "Hit R to reload". Maybe label the two weapons with a 1 and a 2 up in the top left corner as a hint about the UI as well. People don't always read external directions!  But cool style, nice atmosphere, and gameplay is pretty fun. Thanks for sharing.