This game is too slow...I've been trying it many times, the highest I went to was second map lvl 10...way too many item slots making it a pain to find new equipment.
Perhaps this game has a lot of interesting things to offer, but I will probably never get to experience those as the game is just too slow paced...it takes forever to get anywhere.
Dev, sit down and play the game without speed ups, see how "fun" it is

Remove half of item slots...OR lock them behind some areas(like the rest of the game is locked until you kill lvl 10 area monsters)
This way I am not spending eternity praying to drop all pieces(even worse if I am looking for specific stat < btw I tend to go for flat drop rate which may or may not make a big difference in getting more items much faster >) 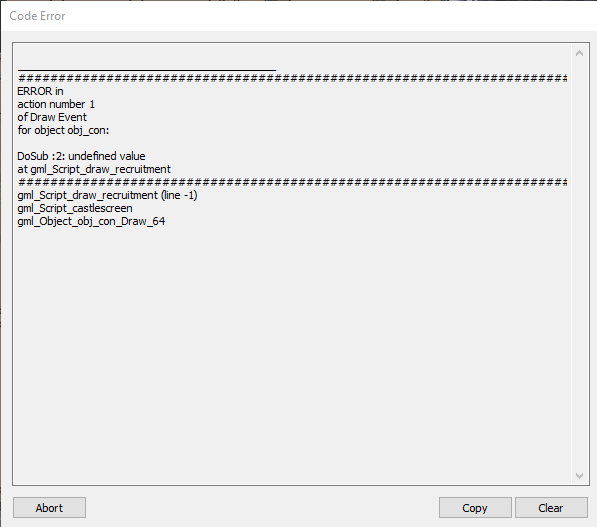 Thanks, I will try @hint

I will have to read about static again then.

will not autocomplete arguments

will not autocomplete its properties either.

This is the main missing feature of GMS 2 that I complain about, is there a chance this ever gets added?
I don't mind manually "connecting" struct methods to the struct itself, as long as the editor can "see" the connection and make my life easier, so I don't have to keep struct window open on the side to use it.

Perhaps you have some workarounds for it?
JSDocs or a plugin will work for me, just make my life easier :|

Suggestion: Add grid/slots where you can place buildings(others would not allow it)
My OCD is going crazy when I misplace a building 1 tile in a wrong direction...
Make it so you can only place every 2 tiles in all directions starting from main base.
OR make it so each building can have various sizes(coolant being 2x2, pump 3x2 or 3x3 etc...With images that take as much space too)

OR maybe Pump requires Water tile and is 1x1 only(so you avoid situation where you get 1 tile of water and cant place a pump there.
OR you can add "roads" that will increase speed(you can place it on water too), so your path finding would use roads if it's faster to get to the location.

So many possibilities, this game has lot's of potential, I hope to see it someday on Steam when it's "finished"

If you click fast, you can buy more drones but your money will become negative.
With good auto clicker I can get myself quite a lot of these.

Service drone is too slow + it's following other drones `path` making it unable to repair them unless the other drone decides to go back same way or simply stops moving.

Accelerate about 200% lol, it is super slow.
Research cost 1000, 1500 points = 5+ minutes of holding down mouse button, gaining energy.
Do that for 1 hour and you finish the game...I hope you understand that this is ridiculous and slow.


After doing a bit more upgrading, the game ended lol, I guess there is no mirror :|

Need 1 spike quest for a main quest to progress but not getting it for a day already.
If there is more after Stage 2, then this is a big flaw, that can force me to miss it as I will just stop playing :/

I want a closer zoom in + some tooltips.
Full screen maybe as well

How about you let us know?