From Beyond: Prologue
In the winter of 1910, Tillinghast mounted an expedition searching for a village shrouded in the myths of a bygone era.
SuckerFreeGames
Adventure
Dungeons: The Eye of Draconus
Are you ready for a multiplayer, early 90's, Golden Axe parody, with a serious pair of unicorn balls!
SuckerFreeGames
Action

Reply
PC98 Layout for Twine community · Created a new topic Any news on adding Action buttons for the side and maybe an inventory?
SuckerFreeGames71 days ago

This has me super excited, I've been using Unity Adventure Maker to make games in a similar style (a bit more MacVentury honestly, but the idea is the same), but you really nailed down the PC98 presentation here for this type of adventure game.  I love it.  Just curious if you were going to integrate an inventory system and if the action buttons were in progress.  This looks fantastic, great job thus far :)

Reply
Abaddon: Princess of the Decay community · Created a new topic Is this using some graphics from Sweet Home?
SuckerFreeGames204 days ago

I recognize the tiles and one of the enemies from the screenshots...  Is this using graphics taken from Sweet Home?  Or is this a Sweet Home hack?

I originally owned Pixa but couldn't figure out Pixa (too many issues to mention honestly).  Bought Juicy FX to get this and not only did it crash my machine the first time I ran it.  But when it did work it...  Well, it doesn't seem to do much.  Your little gif (oh why can't it be a video so I can scrub through it?!) doesn't really help much... Since there is nothing on the right side of the screen and the link you have in the app's description of the pallets is broken.  Just want a GBStudio Gameboy pallet to apply to my 12 color backgrounds I made a while ago.  Always looking for something that helps to knock down the color and auto dither, rather than having to do it by hand.

This needs the ability to add tables for organizational sake...  Preferably where you can change the background color.

Reply
FamiStudio community · Created a new topic There is a bug where it does not change the timer to the time, but instead has it stuck on pattern/frame.
SuckerFreeGames215 days ago

Just reporting a minor bug.
There is not an easy way to calculate the length of a song, because the setting that sets the time reader from Pattern and Frame to time code of min, seconds, does not take.  You can select it and save the setting but it doesn't change the display.

Will there be any follow-up to this package?  I love this style so much, hell I'd commission for you to make another one (and give you the right to resale) I personally need a farmhouse, a barn, vegetable field, and a general store.  :)  Yeah, I know very specific, lol.  Anyway, love what you made here!

Is there a way to export the sprite with the highlighted duplicate tiles removed?

Is there a way to export the image with the red-marked redundant tiles removed?  Or is this just something I'm to reference live on-screen and delete manually in a separate art program?

Are there any video instructions out there? This looked like it was going to be TRELLO easy, but it... Isn't.  I'm a bit confused on how to get started and their documentation page is practically non-existent.

Reply
Democratic Socialism Simulator community · Replied to Wulfgar_3D in Is this a political satire?
SuckerFreeGames1 year ago

Oh I am very familiar with Capitalism, world management and management theories.  I have a degree in Economics and currently work for one of the largest tech companies in the world.  XD

I've just been on the other end of the spectrum economically, and have done pretty much everything over the past 39 years: retail, barista, road crew, crash cleanup, construction, DoD Contract work (Army Corps of Engineers, Navy, FBI, Marine Corps), IT, Game Development, Program/Project Management...

Reply
Democratic Socialism Simulator community · Replied to Wulfgar_3D in Is this a political satire?
SuckerFreeGames1 year ago

1) you are wrong.
2) that said you can attempt to run ancap Laissez-faire hellscape economy if you want in the game.  Everything from authoritarian isolationists to global socialist is present in the game for you to drive your people too.  You don't have to be socialist, it just puts out scenarios, provides you economic tools, etc and lets you make choices to direct society limited by the constitution, public opinion and your current political power in the House and Senate.

Their a Senate/House arch to the right letting you know if your ideas will pass or not and there are 3 main power bars: Treasury (don't run a deficit) and don't risk inflation, Citizen engagement, Environmental impact (a side quest is to hit your emission goals, but you can ignore it if you want).  It actually has a bit more to it than that, but that's a quick run down.  I've gotten pretty good at it and can hit my environmental goals, while still getting political engagement, and go out of office on a surplus.   Oh and yes there are midterms and presidential terms as there would be naturally, you get 2 Terms.  I suggest you give it a try, it's very accurate with it's interpretation of constitutional law and economic impacts, etc.  Oh and yes, you can make a completely failed socialist state that sends the economy into a crater and has the military hold a coup.  Just so you know ;)

I've published several games on Steam and Itch in the past, but honestly my skills as a programmer are enough to get me by, but I'm a Project Manager / Producer as my day job.  I'm a pretty good designer as well...  Not sure I need a team for this game jam or not, but figured I'd see if anyone was interested.  I have made a few VR prototypes in the past, and I'd love an excuse to build something for human eyes over the first week of may.  My only real hang up is that I still work fulltime, but it's remote (due to the pandemic) that still limits my ability to contribute as I will be working from 8am - 5:30pm Mon-Fri.  Soooo I'm not sure who would want to work with me.  I also just turned 38 years old, so I can't push myself like I did in my 20s and pound energy drinks programming and building 3 days and then crashing for 12 hours only to do it again...  XD

My published games include From Beyond: Prologue (Steam, Itch, HB), Dungeons the Eye of Draconus (Steam/Itch/HB), and Kobold's Quest (Xbox 360).

Just in case any of you want the full retro experience, here are printable copies of box art and an official manual.  Make sure to print the manual at full duplex (print on both front and back of the glossy paper) for the best results. 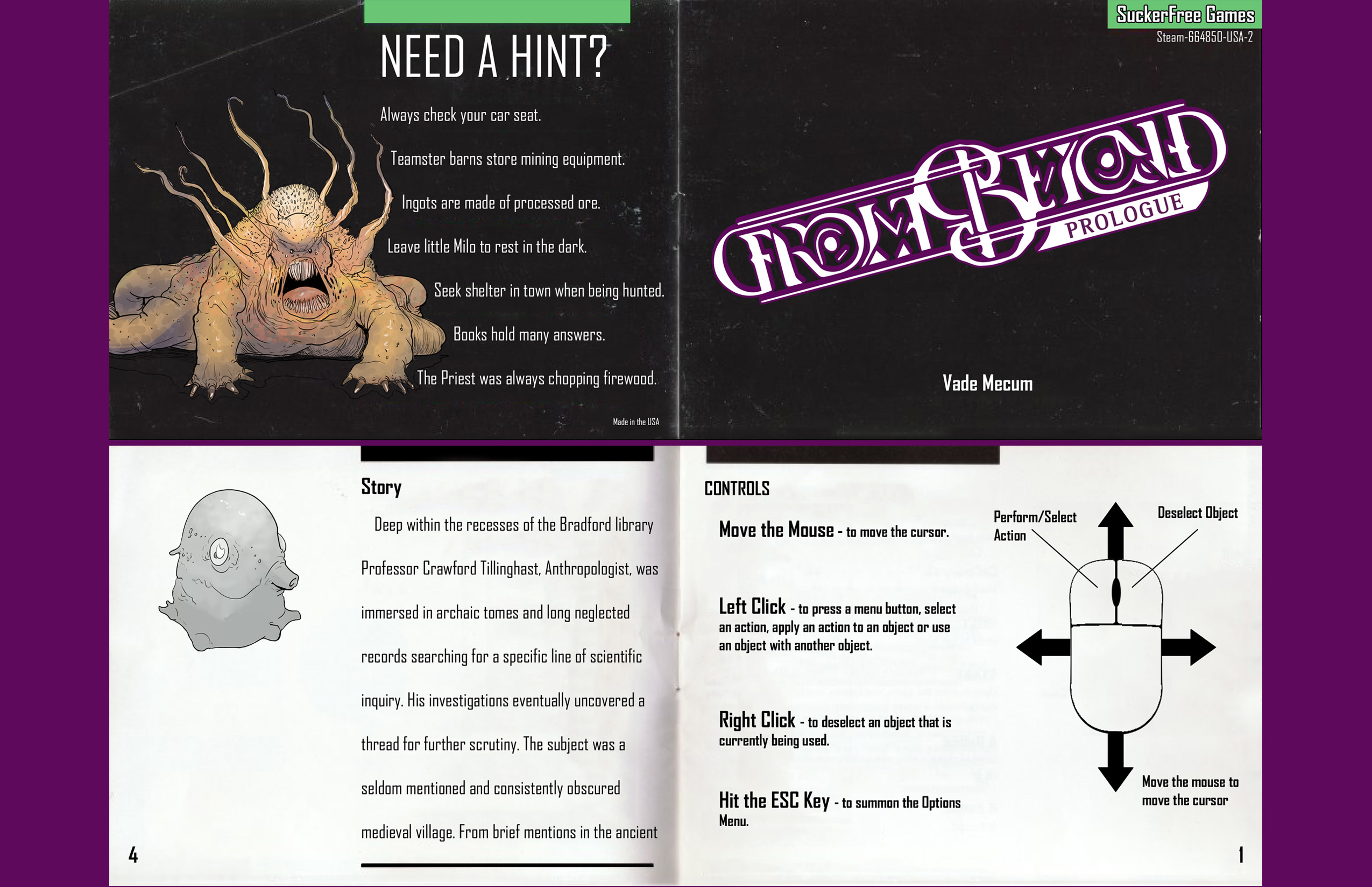 Reply
Them and Us community · Created a new topic Accidently bought this on Itch thinking I was buying a game...
SuckerFreeGames2 years ago

Apparently I bought nothing?  You have it listed under downloadable games in the under $5, but there is no game and now I'm to buy the early access for $20?  I just feel a tad ripped off here, I wish Itch had a refund option :/

If anyone can help me with this, that would be very appreciated... I have gotten no where with this issue.

Looks like it's out on Steam fully launched as of 2 days ago. :)

Ah that's disappointing.  I hope you got back and finish it.  I got mid way through Day 4 before dying. Not that I reads there is no ending, I guess I'm done...

I whitelisted the app in windows defender as the wiki suggests, still won't launch.

Ok, this was working a or so month ago, but I tried to launch the Itch app and it just spins like it's loading and then nothing happens. Nothing appears in Task Manager either.

I've tried installing and reinstalling, which makes the icon launch in the right side box on the task bar, but as soon as I hover over it, it disappears and again it does not show up in task manager.  Trying to launch the software results in the same loading spinner and then nothing.

I have no other anti-virus other than Windows Defender and yes I've turned off everything from Real-time protection to Tamper Protection.  No change in behavior when installing or launching.

I am running have Windows 10 pro.

I beat it!  Was kind of hoping for a bit of a bigger ending and some kind of large event that was being built up by the alien flavor text, but it was still very enjoyable :)