In order to complete the Training you needed to blow up the oil drum, the same applies to all other Stages. I'll probably have them flash intermittently if they are the outstanding objective to remind you. As for NPCs they are meant to get in the way. You don't need to keep them alive to complete a Stage but it will impact your ranking, which might impact the ending.

The green pit is a red herring, you'll never make the jump. Get the green keycard from the right side.

Its meant to be hard. There's a gray platform just to the right of the mined area. Jump/Drop down from there, holding left.

I could easily add the cpu names editable in the options file but I'm busy with other stuff now. I might revisit as I did spend a lot of time during testing watching in spectator mode. Found it quite hypnotic.. What would work better in terms of switching between vehicles?

It's a  Pixel Art, Retro, Platformer.  Part Puzzle, lots Shooter, all on a single screen.  Lots of blood and gore if that's your thing :)

Zoomed in shot below. 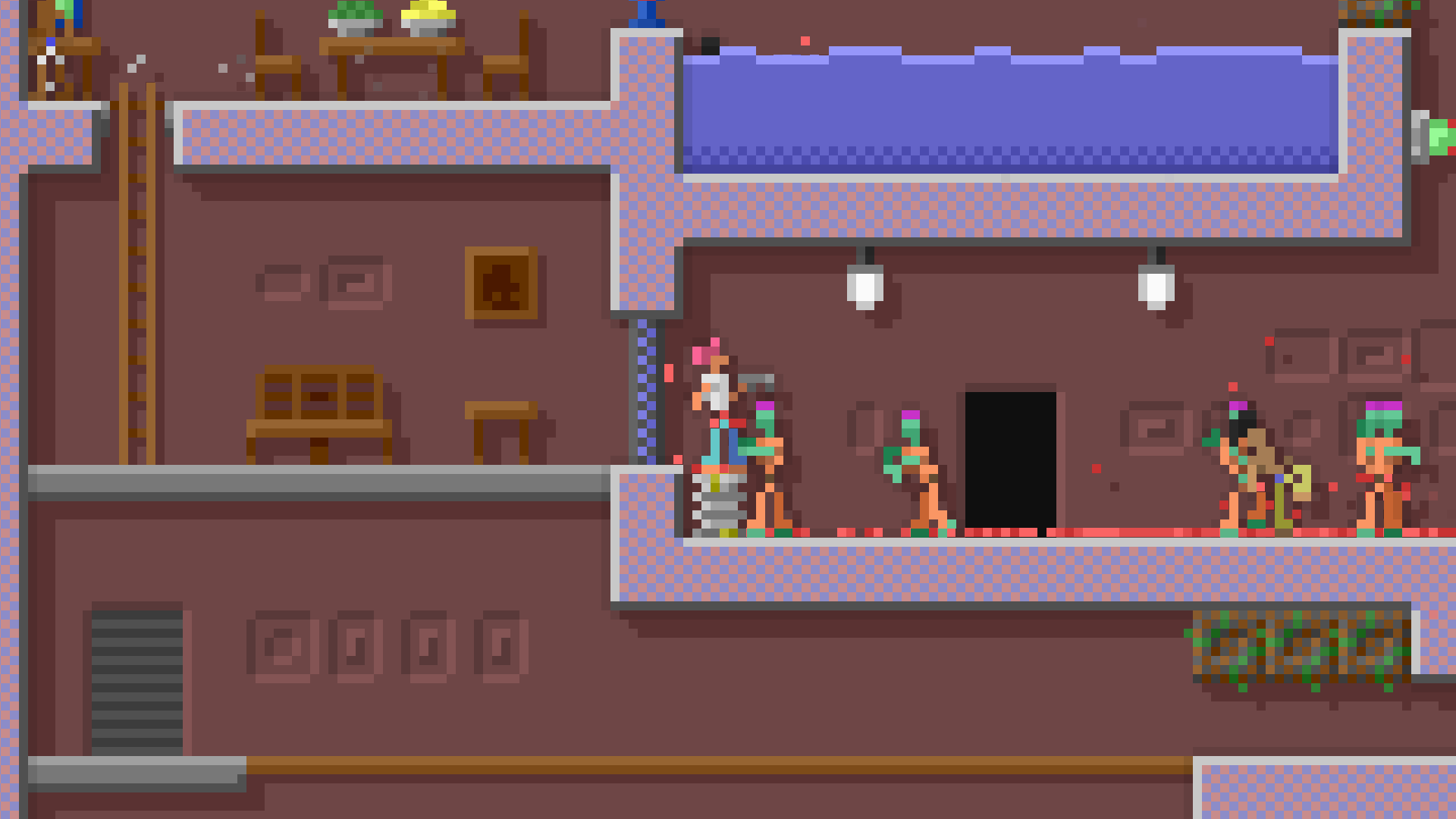 Made in 2.5 months for a competition.   Feedback, playthoughs and bug reports very welcome!

Of course - there are 5 levels of difficulty. You can race against 21 cars in  custom mode.

He is tough. I've sent you an email.

Gunstar is a retro, top-down, multi-directional shooter influenced by classics such as Zarch, Time Pilot, Asteroids and Starfox.

Cheers. Email me at stevie@steviegoodwin.plus.com with more info about your setup and we'll get the full screen working for you.

Cheers. I do intend to make an improved version some day with more detail/colours, better particle effects, banked track elements, tunnels and a track editor. Ill probably stick with the low res though as it's nice and quick to work with.

Are you using the itch app?  I don't think it works on that.

It may be something to do with the default screen res - which is 1280x800 if your system allows.  Can you try editing the Data/Options file and changing the FULLSCREEN flag to either 0 (scale-able window) or 2 (normal window).  If an ini file wasn't created let me know via stevie@steviegoodwin.plus.com and I'll send you one to try.

First person I know of that's completed all the challenges - well done - some real tough ones in there!

Nice Video - keep em coming!  Did you complete all the challenges or just go for the cheat to unlock the party games?

In Hoverball, when someone picks the ball up it's shielded so can't be stolen for a couple of seconds.

The gray score at the side of the leaderboard score is basically a percentage of the overall points scored which each player got.  Something to separate most of the ties.

Yes. It's a Windows only game and it should work with any controller.  Never got around to including joypad configuration but you can change the accelerate and pause buttons by editing the following fields in the "Data/Options.ini" file ..

Turning will be with the d-pad or left analog. 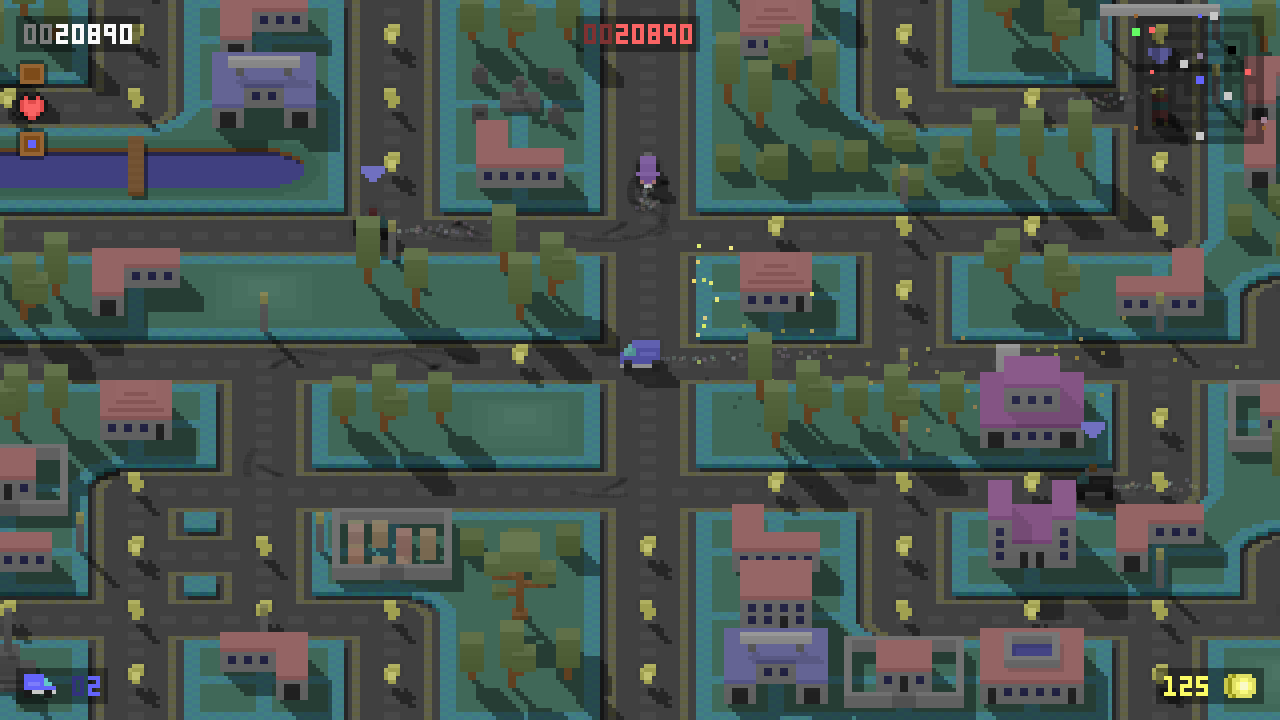 This is for a competition where the gameplay had to involve a maze.  I'll be adding plenty of stuff post comp, including multi-player and some additional graphics.

Sorry, I don't use unity so this question is better asked on their forums.

The tracks were created using my own simple editor which was written in the same language as the game - Blitz3d.  There are approx 1000 different 3d tiles which are placed on a 9x9 (2 layer) game grid to form the track.  I don't think a video would help.

I'll get a new build compiled once I've had a chance to revisit the AI.  Thanks again for spotting and more importantly getting a recording of it :)

Looks like you may have found a bug if the CPU is forced to go through the pit lane - cheers.  Will look into this and sort in a future build - may be hard to replicate right enough.

Also, in Monsoon conditions, going through a tornado knocks you off course randomly which explains why you swerved @ 5:25 and why Blue was naff in the cat and mouse.

I get the impression you are no longer challenged by the AI.   You seem to be racing in wet conditions most of the time and I think the AI is probably a little bit too cautious.   I'm sure it can be improved so will look into this also.

Great vid - cheers!  Looks like there is a wee bug in the scores being displayed for 'Snowball' mode.  I'll see about getting that fixed.

When I can make more selling indie game than I make in my day job I'll sort out the editor .... until then :)

p.s. Any exposure is very welcome and much appreciated!

I've no plans to work on this game again I'm afraid.

I have my own level editor but it would not be worth the effort to incorporate into the game I'm afraid.   I have been building new ones regularly to play with friends so have about 200 tracks now.  I haven't added any of the new ones to the download.  Maybe at some stage in the future if there's enough interest. 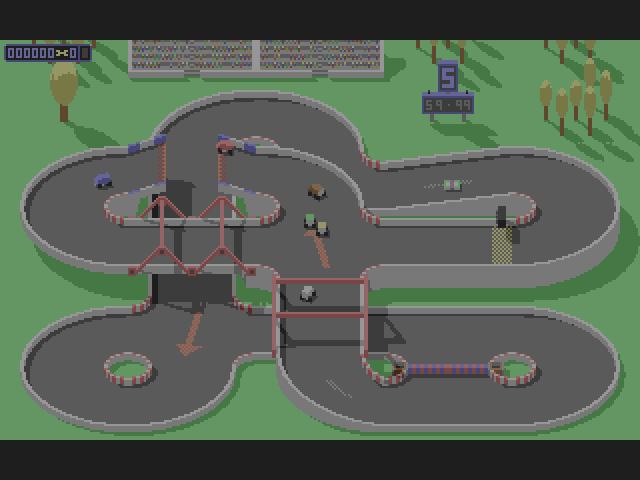 I have been adding some things to it as I didn't have time to add them before the deadline and always like to complete my original vision. Ramps to jump and gates which open and close for short-cuts have now been added to some tracks.  The biggest improvement is with the AI - it now gives you a better race and adapts to your own performance.  I've also added 4 more tracks. 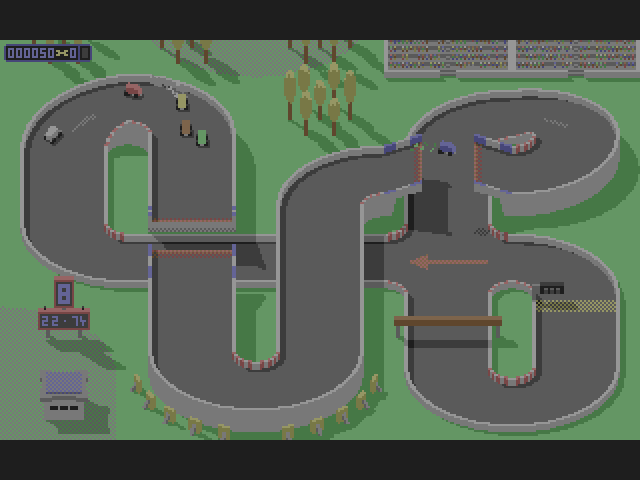 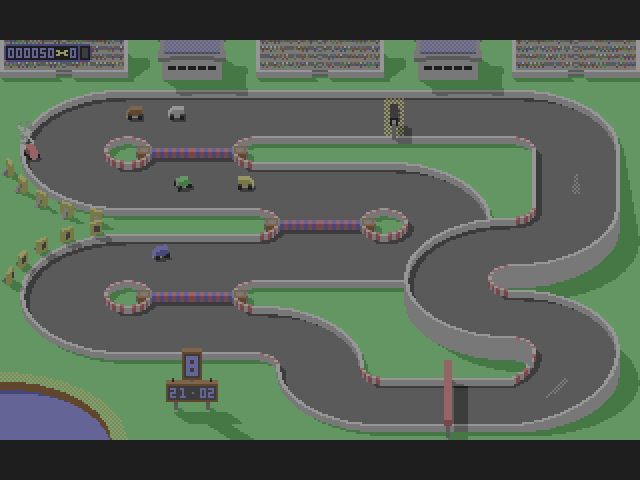 Hopefully have a new upload over the weekend.  I don't plan on expanding it any further but might do this type of game again in the future.

My entry for the Syntax Bomb Retro Game comp:  Resolution of 320x200 and 16 colours max.

Will be making a few updates today and tomorrow before deadline. 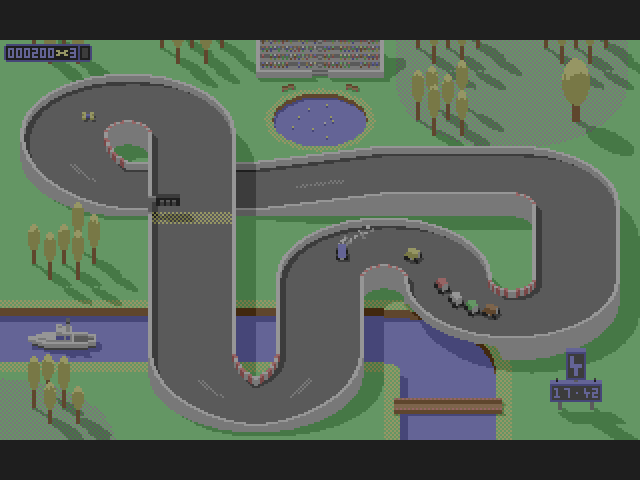 Glad you got it sorted.  The Stinger has the missile tubes but as weapons are off for this challenge you can't use them.  Please be sure to post if you get stuck again or if you can complete all 60.  There are a good few tough ones in there. .

Have you tried just downloading and running without the launcher?

The Z Axis should be the triggers for Xbox pads, where 0 is the default, -1 for right trigger and +1 for left.
So it looks like your right trigger is assumed to be down by default for all 3 pads.  What values did you get for the Z Axis in the PadTest when holding down left and right triggers?

I assume that for your wired controllers the Z Axis defaults to zero on the pad test?  Is that something you can try?

This might be a hardware/driver issue but I'd like to be sure by making a build which gives more more debug info for you to try.  I might be able to work around it.  Off to work right now but I'll get this done later.

In the meantime, assuming that the current setup for Pads 1 & 2 work fine in game (as long as you don't try to reconfigure them), you could copy the following over the top of the Pad3 data.