Awessome game, I've been playing for a few months now, Is there a community page or website for this game? I'm looking for battle strategy info from more experienced players, when other villages attack I usually loose more spear men than they send if I try to defend, while others in my alliance say the right defense techniques can cause you to loose much less spearmen.

Ever wanted a remote control for your pet? Now  you can! With your Android smart watch which you can affix to your pet's collar, you can remote control your pet by sending commands your pet can hear from anywhere in the world with any device capable of sending text messages, including emailing your pet from your computer! For the best experience, K9 Wear is designed to be used with my K9 Remote app for Android cell phones because when using K9 Remote you can send your pet commands to K9 Wear by voice or text! (But both apps function normally without the other)

K9 Remote for cellphones can be found here: https://play.google.com/store/apps/details?id=com.roadhammergaming.k9remote And the official homepage for both apps is here: http://roadhammergaming.blogspot.com/p/blog-page_31.html

Get it now on itch.io!

How can a game be made with a size of 3kb? Is that really possible?

Thanks I will look into that, I have a major update to release later today when the voting ends for the game jam the game was created for, providing our power comes back on ( its been out for 2 days because of the north-easter / hurricane we had)

I'm wondering if your issue might be related to the version of windows you have? I think the game release only supports 64 bit systems but I'm not sure, so far you are the only one who's reported this problem.

Thanks it was a fun project, a fun game jam and I learned alot while doing it, I realy like the love2d engine and lua

Nice job on the graphics and gameplay, well done.

You're welcome, and yep it's working now! very nice

Sweesha and her pet Starla decide to go to the secret pool for a picnic! Guide them there and enjoy the scenery and have a beautiful day!

You start off in the office, 1 of 4 rooms in the house, go up through the door on the right and when near the couch call Starla, your cat. Find all the items in the house that you need, 5 of the 7 items are obvious to find because they are lying about the house  and they glow, the other 2 are hidden somewhere in the kitchen. go back to the office and down to exit the house. Use the menu (P key/Y button) to view your checklist, equip items, save or load a game, or adjust things in the options menu. Outside on your adventure you can feed your cat, have a picnic in the field, waterfall, behind the waterfall or at the secret pool, (have as many picnics as you want) or go inner tubing  behind the waterfall and in the secret pool. (check the check list in the menu to see where you are) You can get on or off the inner tube only in certain parts of the room, a one-time message will show when you are at the right spot. There is no winning or losing at this game, just go out on an adventure and have fun!

It said not to, but I went into the portal anyway but everything turned out ok in the end, Nice game!

Hello, I tried to play this but on load it says unable to find gothic font, sorry

Awesome game, had me in stitches laughing nice work!

Thanks! great video! all those games looked fun too! Frog jam was a blast, I allmost didn't finish in time because I downloaded unity game engine and tried for a day to make the game, relized I was getting nowhere so did it in gamemaker studio in 48 hrs and with 4 minutes to spare instead haha!

ahh ok cool thanks alot I will do that, great work with this program and I'll be looking out for the next update, happy gaming!

Hi, just downloaded Tiled, mostly for the compatibility for unity, but the terrain feature as well, but the terrain feature  isn't working, possibly i did something wrong but it was partially working (it made 'ghost' tiles over the tiles on the layer and then the program crashed) and I followed your tutorial in the manual exactly, but now nothing shows up in the terrain window at all even tho in the tab under the file bar shows it's there and the edge selections were made. I also saved my work every time I completed an edge action on each of the 4 terrain types. I tried exiting the program and reloading it but getting nothing in the terrain window still. (I'm using windows 10 and 64 bit version of Tiles)

Hi, If you're an entrepreneur like me you need a way to keep track of your business hours!

Rhg Timecard is an app for small business and work at home entrepreneurs that can keep track of up to 12 employees hours, breaks, overtime hours, holiday hours and weather or not they started work on time. You can also use it for recording travel time, fieldwork time, or tons of other things you need to keep a time record of. Rhg Timecard has a unique look and employee incentive with an 'active earth' icon in the center that moves every 1/2 hour, with the front side always representing where on the globe 12 o'clock noon is. The hidden incentive is when you open the app and the earth hasn't yet turned to your accustomed punch in time's position you are still early and will be inclined to punch in before it switches. Rhg Timecard also works in all timezones as it sets the correct time and 12 noon positioning of the Earth animation. You can log in, punch in, then shut down the app on your phone and even log out but when you start Rhg Timecard back up again and log in, everythings still as it was, if you were punched in you are still punched in, or if you were on break you will still be on break till you stop break or punch out.

This is a fun and addicting game nice job!

This is the only way it works for me (copy paste) that image code does not work.

Have you ever wanted to play a video game as being ALL of the monsters? now is your chance! Play as the monsters inside a crystal pyramid and defeat any would be heros that wander into your realm! in this episode there are 4 heros to toy with!

Mesher grew up in a large city and so was streetwize as well as stealthy and a master of locks and all things mechanical. Mesher also strived to gain all the wealth he could without thought of who it would hurt. He left the city on word of a mysterious pyramid that had landed somewhere off the Kancamagus ridge, supposedly rumor had it that it rests on a huge pile of gold coins! Reaching the pyramid he realized the rumors were true...

Librianna grew up in the valley, She became a hero for rescuing an entire heard of Bison who were about to cross paths with a train, She used her emerald dagger's magic to distract the bison, with a flash of green light they halted in time and the train passed. Now, Hearing of a strange object's landing and that some evil force was present inside, she decides to go and eradicate whatever's in there. Just then an inky black slug crossed her shoe, she hated slimy creatures...

Vianna was raised in the high mountains and was heir to the ruby palace, a great expanse of naturally made pure ruby cave, and the source of the community's mana force. Vianna's people believed the recent night's falling of the crystal pyramid just 5 miles south of the entrance of the Ruby palace cave that it was a sign and she was sent to scout out if and how to get the pyramid inside the cave. It was scorching hot out but she pressed on, "I hate the heat" she exclaimed.

Rennel was raised in the woods with the superstitious lore of the tree dwellers, at an early age he lost an eye in an attack by something other than forest creatures. It all started when the strange crystal pyramid landed in a small and scarce field by an outcrop of glacier-pushed rocks. His brethren tree dwellers were disappearing one by one ever since. "With my unbreakable blue diamond fused with titanium crystal tri-star only the earth's very magma it'self could possibly defeat me!"

Check out the Crystal Pyramid home page for all the details, Happy gaming!

4 superheros go on an epic quest to change a light bulb!!


Rezza turns on the switch and one of the light bulbs burns out! No big deal just replace it right? Wrong! this seemingly mundane event turns into a quest of epic proportions to get the job done! good luck winning this game!! 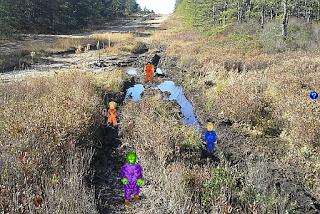 In this comedy adventure game you can control one of 4 characters and switch between them whenever you'd like. There are 4 chapters to complete, the first 2 are in the local area near their penthouse, and 2 additional areas with the last being the longest and hardest to complete. Save your game at any blue ? mark.