L-3-FAN T
dust must go
Norgg
Puzzle
Play in browser
Late Shift at Liminal Station
Welcome to the Liminal Station Lost Property Office, your workplace over the summer holidays.
Norgg
Play in browser
Charlie the Chronocurator
An Adventure in Time and Museology
Norgg
Adventure
mend me
A local co-op bullet heck
Norgg
Shooter
cuppa
Make a cuppa. Made as part of ChillJam
Norgg
Play in browser
The Amazing Firedogs!
Rescue the humans before they cook.
Norgg
Platformer
sphereFACE
A retro-styled 3D vector shooter, wrapped around the inside of a sphere.
VoxelStorm
Shooter
The Amazing Firedogs! (Prototype)
A husky and a corgi race to rescue humans from a fire in order to be a GOOD BOY.
Amicable Animal
Platformer
scrambling
A hopeful wee thing
Norgg
AdvertCity
A cyberpunk advertising tycoon game.
VoxelStorm
Strategy
GIF
Feed Hungry Babby
Make jam sandwiches or get eaten trying.
Norgg
Sports
Fractyr
Fight and flight through a fractured fractal frontier.
VoxelStorm
Shooter

Enjoyed playing through this! I gave Fergus feedback on it on Thursday over voice chats. I agreed that the sell from Grosz was a bit too dodgy-sounding, it was tempting but felt like too much of a betrayal too.

I was sad that the deluxe bullets were worse than the normal ones, damn that false advertising, but it fits with the setting.

I was also a bit annoyed that repairing the sensor was the wrong choice because I don't want to go wasting a perfectly good sensor that just needs a bit of hacking to get working.

Lost two pilots on the first go myself too, did kind of concentrate on trying to optimise the numbers rather than thinking enough about the actual wording.

Had a brief go at this but don't think I can really give it a rating since I haven't tried it in VR as intended. It is pretty though, are you considering doing a non-VR version?

Where is this cafe I need to go there now please.

[sees credits] Oh I guess I follow a bunch of these people already, yay.

So, this was cute and a fun mechanic and I enjoyed matching people up (and I did learn some new flags I hadn't memorised yet), but it doesn't seem to actually explore the gender spectrum? Everyone seems to be pretty binary.

Aaa, the feeling of this is great! I love the hidden/alternate worlds of each person in the village.

I couldn't figure out how to open the gate or seem to interact with anything though, is there more of this that I've missed?

It was starting to feel like the solutions to the last few puzzles were getting a bit similar, but then purple got me pretty stumped for a while. I noticed that sometimes it doesn't seem to update quite right (usually fixing itself after a couple piece placements) and I accidentally ended up with this kind of broken solution to Orange: 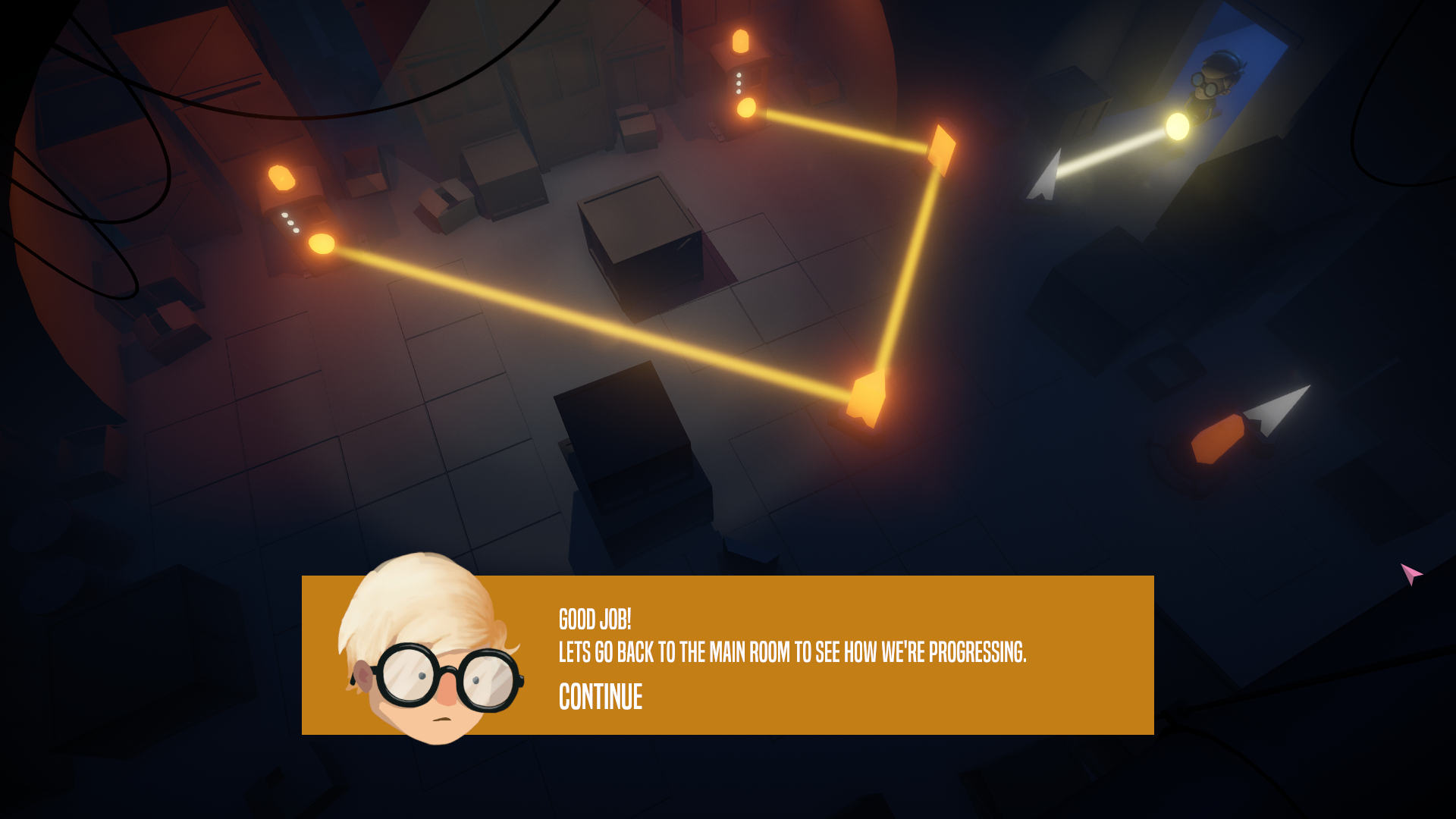 This looks and sounds great! Afraid I can't really play it effectively due to colourblindness though (found it hard to distinguish between the two lighter blue/purpley ones and I think the yellow/green ones).

Also a fan of that Sir Addlesworth III, although I hope he deserves the honour for serving penguinkind well and it's not just one of those political appointments to please penguin parliament. Got to 93 feeding time fish, thought more would come eventually but it seems the humans have gone away forever now. I have a lot of fish for now (some admittedly stolen from the other penguins) but they will not last forever and I am worried about what will happen when they run out. I hope the humans come back.

There's a lot here! I was curious as to where the heat mechanic would go.

I was frequently getting a popup with info about my ID badge for some reason, had to open and close the inventory to make it go away again.

This looks and sounds amazing, would love more too!

Thanks <3! Would you be up for messaging me with your interpretations? I'd love to know what comes through. If you're on Twitter my DMs are open, or are you in the Discord?

When I load the page it's saying "Sorry! The shader you are requesting doesn't exist.". I couldn't find it by searching on shadertoy either. Is the game down?