Nice strategy game! I realy like the graphic (icon) style! And of course the Game of Thrones theme ;-)

Amazing adventure game!
I really liked the old scholl UI and of course the amazing pixelart!
Additional I have played the original games which you have used as inspiration so +1000 for nostalgia!!!!
Also, so far, I really like the quite unique setting of your game!

It's is possible to put keyboard shortcuts for the actions? Having to click each time on an action first get annoying very fast!
Also I think that the movement action should be mapped to the numpad keys to allow fast movement within the game (since their positions is quite similar to the exit positions of game locations).

Also you should put the default graphics scale by default to at least x3 even x4 since the default x1 in today monitors produce a veryyyyyyyy small window ;-)

The humans have abandoned the zoo and left you (the Panda) without food.
Time to go find some youself in a building that the humans keep calling 'SUPERMARKET'. 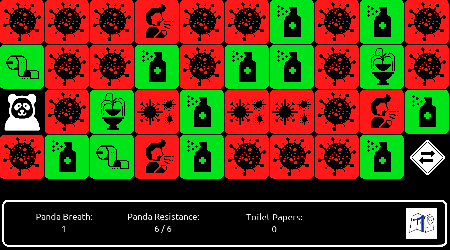 A turn based puzzle roguelike originally created for The Panda-mic Game Jam
with further improvements post-jam.

You can try it here (both web and desktop version available).
Constructive feedback is greatly appreciated!

Nice exploration survival game! As someone else pointed losing if you cannot buy something from the merchants is a little weird.  Maybe a quick fix?
I really liked the worldmap and the different events in some of the tiles (I really love this type of games!)
Great job with your game!!

You should also make export for Windows and Linux. Only a couple of clicks since you are using Unity ;-)

Nice horror game! A little to difficult for me (especially with the monster speed and me been an adventure game fan ;-) ) but still a very nice nice effort! I really loved the sound/music. They really added to the horror atmosphere!

Excellent clicker game!
I really like your choice of cthulu theme.
Very good pixelart!
Any chance for a native linux version?

Awesome game! Amazing art/story!
Could you make an Linux version (since you are using Unity)?
Also I really recommend to make a web version to make it easy for players to try your amazing game!

Nice endless drop game! Since I am not very good in this type of games I didn't get very far but still what I played was very nice!

Wow! The turning of the tower was amazing! And very believable! Nice!!!

Nice game. The summoning of you stand make for some very interesting "puzzles".
Very nice entry!

Nice idea to use the bird as a "hole opener".
Nice and clear graphics! A very nice spin of flappy bird!

Reply
NOKIA 3310 JAM 2 community · Posted in Are changes to the game page allowed during voting period?
Vasilis Chonianakis114 days ago

Hi,
Are changes to the game page allowed during voting period?
Like for example putting soundcloud links to the musician account on the game page.

Thanks! I will try this on a test build. I don't think changes on the game files are allowed during the voting period.

Hi,
Are changes to the game page allowed during voting period?
Like for example putting soundcloud links to the musician account on the game page.

First of all thanks for playing and rating our game.
The game native resolution is 84x48 as per the requirements.
Just as most jam entries (yours included ;-) ) the window is just scaled by 10 to allow the player to play more comfortably the game.

Nice little action game! Nice clean graphics!
Simple, straightforward gameplay!
The one life make it really challenging since you have to avoid both ground and air attacks.

Thanks for playing and rating our game!

Thanks for playing and rating our game!
I will try your game as soon as the missing pck is available.
We need more Godot games!!!

Amazing fishing game!! The gameplay is awesome! Avoiding the red fishs while still getting the smaller fishs work really well!
Both the pixel art graphics and the music work really well in adding to the atmosphere!
Thank you for this game!

Excellent puzzle tactics game with solid gameplay!
Excellent graphics with a not common (which is a big plus) ancient greece theme!
Personally I would have preferred a little larger (in size not in content) levels to give me (as player) more room to move and use your abilities, but maybe that just me! Still this is probably nitpicking...
Great work!

Still a very nice try! Keep up  the good work!

Nice simulation - rogue-like game! So nice to play a game of this style without combat!
+1 for the nicely done low-res graghics

Big plus by the way for using the amazing Godot engine!

A little feedback (in case you expand the original jam version)
- put a minimap on screen.
- put ammo reloads on map (just like the medikits) and limit the ammo of the player's weapons (no need for additional weapons, just to make the player think before shoot all the time). As it is now the only battles that presented some difficulty where the "boss" battles!

It's is possible to make a linux 64bit version export? As a native linux user I prefer a native version instead of using Wine (PlayOnLinux).

Just out of curiosity when you recover something (I will try to avoid spoilers for my fellow gamers ;-)) from the first dungeon and you have a choice whether to give to someone important at the town does the choice you make affect the location that you found yourself after or the npc that join you? I choose to give what I have recovered in my case.

Excellent retro rpg! the might and magic style is amazing!

A couple of questions:
- Is it possible to allow buying multiple items when you visit the shops? As it now you can to reenter the shop in order to buy another item!
- Also it is possible to automatically unequip an item when you try to equip a similar item? Having to remove first the currently equipped item before you can equip a new item is very exhausting!
- And finally where the savegame is located for the offline Windows version?

Feedback: please put the game files in a folder inside the zip file and not directly in the root of the zip file.