Alright, i don't really know how i'm supposed to respond to that ^^'

Game feel is something i find very important in games, so it's nice to hear i've done a good job.

In this game you fight enemies using fast space ships and a variety of weapons. Each enemy you kill gives you some money you can spend in the shop to get upgrade modules (they give you more health, faster boost, etc) and weapons.

It's also synthwave themed and has a fast-paced intense synthwave soundtrack. 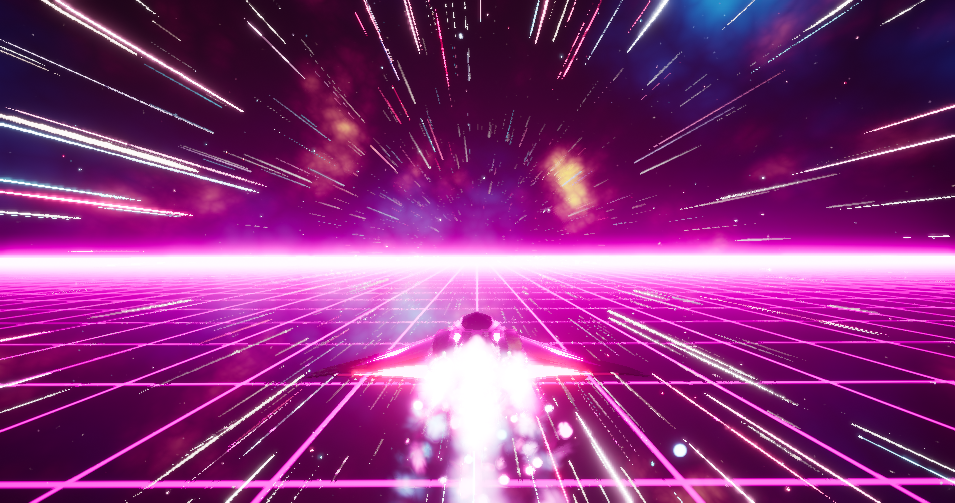 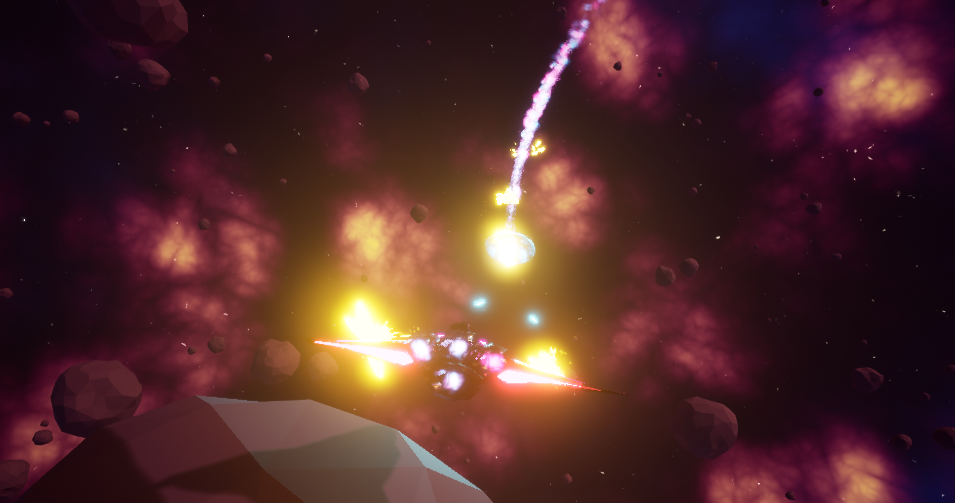 (Note: It's early access and pretty small in it's current state, and i don't know how far i'll take it before i call it done)

Due to my inexperience with game jams (this only my 2nd one) this game's code is an absolute mess, so if i revisit this idea it'll definitely be from scratch.

Do frantic dodges as you try to get points without getting hit!

While you're not charging or dashing time slows down to give you a moment to think. But don't think that means you can relax!

A frantic twin-stick shooter where dying means losing your gear!

Earn money so you can upgrade yourself to be able to face the challenges ahead, as the path ahead is treacherous

Thanks! they were definitely a focus so glad they seemed to work well!

It's probably because i didn't have time for tutorials (The arrows were the closest thing i could get to making one). Basically you're supposed to gain a lot of speed (There are various methods for this. If you don't know any try to experiment) then jump and dash diagonally upwards (The reason the arrows are there) and then if you gathered enough speed you can get to the platform with the exit.

This is my 40 Hour Game Jam entry. You have to escape the level in under 10 seconds. To do this, you have a couple of moves which can be combined for tremendous speed.

You can also do this with wall jumps for various effects.

I don't have any real way of knowing what the requirements are unfortunately. However they shouldn't be super high and since the game is free you can just try and see if it works.

Abyss Skull is a Roguelite  in which you play as an undead that throws spears. Lots of spears. It's fairly simple and small at the moment.

Yes, if you have the required resources collected (use the collector block) then you can just left click on it

Reply
itch.io Community » itch.io » Questions & Support · Replied to No Time To Play in Save game as draft without publishing changes on a published project
Mia Bentzen4 years ago

but does this work  when a game is already published, and you want to change things without updating the published version but you don't want to unpublish it either

It would be really nice to do changes over multiple sessions for things that take a while without having unfinished content on the page.

that was actually what i was trying to explain, very poorly. With slowing things down but speeding the game up. I actually tried it but the game is a tad awkward in places now. Though it is better i think.

Thank you for these images, they're gonna be extremely helpful. They've made me realize there are fundamental problems with the design of the game, so 0.4 might be a tad delayed or maybe 0.4 will be released more as a quality of life update and then 0.5 will be big update. Either way i will be attempting to redesign the game in whatever ways necessary to make it so more complex solutions = faster output (assuming they're not dumb)

I will temporarily shove the controls into the main menu, will probably move them later.

As for the resource orderings, they actually are consistent. Just in a weird way due to the adding and removing of items. And the upgrades are actually less consistent funnily enough. Though in practice they're definitely more consistent. Basically i don't really know what i want for the orderings here and I'm gonna change it many times probably.

If there is any way you can make a screenshot later i would love to see it, as i can't quite picture it in my head. But I'm going to try to keep basically this entire post in mind as i move forward.

But yeah definitely gonna try and make those sprites a bit better, though i have a band aid implemented for 0.4 that makes it obvious what items you need (they're named both in the resource... tree? view? i don't know and in the upgrade menu). But yeah it was bronze you needed.

Game Dev Rant (i think?) Incoming, TL;DR I need to change a lot of things and rethink splitters to fix this but i am going to try. And hopefully it will work.

The biggest problem with your design (well actually the games design as i want people building interesting solution's like yours) is that it's 100% grid based. I can't change this fact but it's awkward to work around, and why belt's feel slow. In Factorio belts aren't quite grid based and thus can carry 3 more items. That and they're smaller than in Manufactory. which makes them much better in Factorio than in Manufactory.

The second biggest problem (or maybe this might actually effect it even more, i don't know) is that the whole game runs on a timer, meaning every block has a minimum amount of time they can do stuff in. Conveyors run every time the timer hits. Meaning they are the fastest thing in the game.

This effects splitters as it is literally impossible for them to move items at the rate they're supposed to (they won't fill lines unless you block off both exits. Which is obviously useless) because splitters need to be faster than conveyors, yet conveyors need to be faster than splitters to deliver the items, i also don't know how to use Factorio for reference in this case cause i have no idea how it works in Factorio, it's like magic. However the thing i mentioned before about making everything slower and speeding the game up would help solve a part of this, and a redesign would hopefully solve the rest. So i'm hoping that i can get this fixed quickly.

By the way was this rant too much or was it fine, should i just explain things simply or should i keep this complex explanations in (because i like doing them)

On my machine it seems to work fine, however there are a couple of reasons i can think of that would cause it to not work:

I actually just implemented the number keys as block selection keys. So that's coming in the next update.

I was planning on doing this, but at the moment i can only make them even slower than they already are and make them upgradable to their current form. However i can slow everything else down as well as the conveyors and speed the game up and it would probably work. I haven't tested this yet so i'm not gonna promise anything.

My game (actually just a test page). It's not public right now

No error messages, i only tried firefox.

my game uses i think window.onresize to handle resizing (i set my canvas.width and height to the window.innerWidth and height), is there something else i should be using? (it works fine when resizing the browser)

The game page is currently not public, is it necessary to make it public?

No matter what i do, pressing the fullscreen button always results in a black screen.

It does say it useful for twine game, but it doesn't say it only works for twine games, and i have seen a game here that uses it which most certainly isn't a twine game so i think this is supposed to work. Please do tell me if i am wrong though.

make lot's of money, then use that money to make it even more elaborate.

Drill to the planets core and make millions doing it!

You start small, manually clicking the planet. Then refining the ore. After a while you can build Drills and Refineries to do it for you, Your reach slowly growing in size as you play.

Well yes and no, there was a bug i didn't notice before in terms of accuracy and recoil. Basically you're either accurate, or inaccurate. Nothing in between. So basically, if you added more barrels you should in theory reach the point where it will always be 100% accurate.

I have already fixed this i just haven't published the build yet (I have to disable a feature i was working to do so).

Unfortunately, i don't think i can really fix this, because i have no idea how Linux builds in unity works.

Well, i haven't exactly thought up a grand plot for the game. So for now the plot is Video Games

2 is fixed, at least as much as i can at the moment.

Thanks! It's gonna be really weird seeing my game on youtube

Since this was the first game i ever managed to actually finish (and i have a lot of trouble with actually doing that), i can't say for sure if i will add more content to the game.

It's also a little tricky to judge if i dislike my game (or game feature) because it's bad or because i made it. As i found out with this game, because i think it's just above bad at best. So i'm also gonna have to learn when something is actually bad and when my expectations are ridiculous.

I was aware of this issue and thought i fixed it, but i guess not :P

It should be fixed now, if you find anything else then please let me know.

Gunstructor is a game where you construct your weapon, as well as the projectile it fires. Then you will be fighting tons of enemies to get the highest score. You have to balance your quick reactions and aim with your careful gun design.

I feel that i should mention that the game is pretty small. At least at the moment.

Any feedback is a appreciated.