Hi! I'm glad you're playing it, and I'm glad you're coming back to it periodically. That means a lot to me as a developer - your time is valuable, and to have made a game that people want to come back to is really meaningful for me.

1. Both of them will create better items the higher the skill is. At some point I've been meaning to also have higher skill give you a chance at more projectiles (for fletchery), maybe I'll sneak that into the next version.

2. It depends. That particular dungeon should always have 25 levels. And yeah, it's dungeon-y right now. Not a lot of actual variety in terms of the levels.

3. Not in the normal game mode, but there's a setting called (I think) narrative_mode that you can set in swyrm.ini. When your character dies, the game will revive it with full HP, so you can explore the game.

4. There's definitely a scroll that does that. Your deity may also decide to uncurse your equipment if you pray and don't have other pressing needs.

Reply
Shadow of the Wyrm community · Posted in Beat the game (So SPOILERS!!!)
Julian Day118 days ago

I've added a skill trainer in Carcassia. Let me know what name you'd like for the credits? If you don't want to say here, shoot me an email, my address is on the website.

Reply
Shadow of the Wyrm community · Posted in Beat the game (So SPOILERS!!!)
Julian Day126 days ago

Thanks! The next version will have some major changes - the X Lore skills become useful (you can find hidden treasure), and I've finally implemented zlevels in a very rudimentary way, allowing you to fly up to the sky or eg go down into the water on a forest map, that kind of thing. Very buggy at the moment, so no clue when it'll get done, but that's coming at some point. As for your points:

1) There's no real way around it: if you're prompted for something, and you say yes, the game'll do it. Generally, dangerous things don't confirm by default (I've been fixing various occurrences of this). Sorry about your death! But don't climb mountains unless you're skilled. Actually, in the current version, don't climb mountains at all - even at 100 Mountaineering there's a chance you'll fall. The current dev version changes this so that you're always safe at 100. But I don't know when this'll be released, as there are some very major changes coming in this one (mentioned above).

2/3/4) There's a setting in swyrm.ini you can set to prompt you to complete a quest:

; Should the player be prompted before completing a quest?
prompt_before_quest_completion=0

This applies to all quests, not just fetch ones.

5) If you feel the game's too easy, there are other endings you can try out. The godslayer ending is certainly winnable, but a number of players have kept dying midway through it. It's meant to be a little unfair and stress your build. It shifts the emphasis from evade and soak to resists.

6) You can get it either in Isen Dun or Carcassia - not for free for the latter, it'll cost you, but it's an option.

7) Far NE, right at the corner, should be on an island that has a tower tile on it.

9) No, and this has been on my long-term to-do list forever. One day.

10) South of the west gate. You won't find her lover, exactly, but something of hers to bring back to Lish.

11) Peace bond or something might not be a bad idea, I'll add that to my suggestions file.

12) It was the wyrm, who destroyed it and moved on.

14) They'll gradually get improved, everything moves slowly in sotw.

15) Could happen and would be unfortunate, but it's behind a confirmation prompt.

16) You can still improve most of those skills. Just, by use, and therefore slowly. There's a trainer for stats in one of the towns - I might look at adding a trainer for skills.

18) Kick it for sure, maybe also digging via pick axe or spell, I'd have to check the code to confirm.

19) I'll look into this, if this isn't in the character screen/dumps, I can certainly look at adding it there.

20) There's a setting for something like this in swyrm.ini. It's just called narrative mode, the idea being that you just get prompted to revive yourself whenever you die:

1. They do. Improving primordial will increase the maximum number of castings you can get for witchling spells when you level. It makes it easier to learn spells, for non-witchlings. It also increases magical damage for spells. Both Magic and the specific magical skill do this, so increasing Magic will affect all spells, and then e.g. Arcane will provide another bonus, which are both included in the overall damage calculations.

2. I don’t auto-swap because sometimes you want to attack, and this is an easy way to do both. You can always just e.g. hit the direction again to swap. You don’t have to select “Y” and this takes the danger out of the next prompt.

3. I admit: I tried this. I couldn't undo decades of muscle memory from playing ADOM and SotW. I put it back. You can always swap keybindings in swyrm.ini if you want.

6. There was a recent issue with attack orders not working as expected – this should be fixed in the next version.

8. Adventurers show up in dungeons because, well, adventurers go to dungeons! Adventurers are newbies (always level 1), so they never have anything great, and they can join you, but are otherwise flavour.

1. Yup, they should respawn on most maps periodically.

3. Not yet, perhaps eventually

Reply
Shadow of the Wyrm community · Posted in Familiars, Fun, and Fishing
Julian Day1 year ago

- Familiars and followers respond to 'o'rders. You can eg tell them to stay still, follow, attack - but you'll always have to be mindful of your spells

- Stand near or in water, hold the fishing rod, then select fishing from the skills menu (F3). You may not know fishing. There's an MPC who teaches it.

- For bowyer/fletcher you just need the right components. There isn't a station for those.

- Generally, Crafting affects a range of skills, but does so less than the skill directly associated with your action. This is similar to how weapon skills work: combat will raise your to-hit and damage, but less so than the direct weapon skill.

Hi! My name's Julian Day, and I'm a software developer (and hobbyist game developer) from Manitoba, Canada. Yesterday I released Shadow of the Wyrm v1.2.0, a traditional roguelike and my passion project that I've been working on for almost nine years. This release is a big one as it's the first to have a full spriteset used by default. The sprites are 16x24, 1-bit, and there are more than 600 unique sprites available in-game.

Both the game itself and the spriteset are free to download and MIT-licensed, if you'd like to take a look, or incorporate the sprites into your own project.

The sprites are all white internally, but get coloured by the engine. I was shooting for a feel similar to 8-bit titles like Dragon Warrior 3, though I've had others tell me they remind me of the old Ultima games. Here's part of a screenshot where you're walking through one of the major cities: 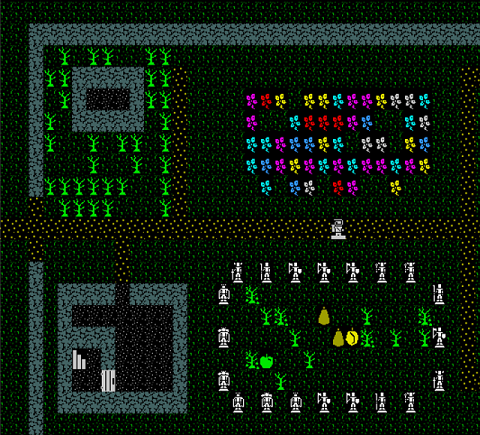 Game and spriteset can be downloaded at:

I hope you find these useful in your own projects!

4) Real estate on that screen is one reason, and the other is that SotW is less "information based" than some other roguelikes that'll lay everything out for you. This information is still available, but it's not in your face. I personally like to have a game that hides a bit of information to allow for some surprises and mystique. I realize this isn't for everyone, but it's how I like it. Like you say, that information's available on the character details screen.

5) I understand this, but I feel like not showing uncursed is more of a break, and having "?" a bit jarring. I'm likely to keep this as-is, but thank you for the suggestion

6) Oh, I love this. Yes, I agree. This is something I'm likely to implement, now. What name do you want for the credits file? I make sure to credit people who give suggestions that I end up implementing. I can use "hbholland", or if you don't want to say here, shoot me an email (address is on the website).

And thanks especially, re: the writing. I'm a software developer first, but have been writing my whole life and publish and review poetry, so it's something I take seriously.

I just double checked the code, and the behaviour is:

You can identify item statuses via scrolls of identify, or by playing a PC with the Lore skill (merchant, minstrel, pilgrim, sage, wizard, witchling).  The Lore skill has a one-time chance to identify an item on pickup.

Altars only display the b/u/c status if they're co-aligned.  If you go dropping items on altars that aren't your alignment, the deity is annoyed with you and curses your item.  So, as you guessed, four in a row isn't bad luck in your case.

Each deity has their own list of likes and dislikes. For the good deities, these are things like attacking friendly creatures, cannibalism, grave robbing, and desecrating good-aligned altars.  The neutral-aligned deities are less consistent (Vedere has similar restrictions as the good three; Voros only dislikes graverobbing and desecrating neutral altars; the Trickster relaxes the restriction on attacking friendlies), and the evil deities are the most permissive.  They just don't like you desecrating their altars.

Humans don't start with literacy by default.  The only race that does are gnomes.  There's a quest in Isen Dun that'll grant it.  I probably should have added a similar one to Carcassia.  I'll look at doing that for the next release.

Hi! There should be a manual in the docs folder.

As for altars, you sacrifice items on them. Generally corpses, but other valuable items should work too. I'm pretty sure you can identify by dropping items on altars. If you're illiterate, praying might uncurse any cursed items you've got equipped.

There's not a lot of differences between the deities right now. They're underdeveloped, and a long way from eg DCSS. Key stats for witchlings are I think int/will/cha, and the Magic skill as well as Primordial and Cantrips.

Thieves don't start with Literacy. Some races do, so if you play a thief of one of those races, you should be good.