Thanks for playing! This is very useful feedback.

From the small things :
For camera stuff, I'll consider having an "orbital" mode again, but I remember trying it out and scrapping it for some reason. Maybe it would be useful to visualize the "right-forward" plane instead somehow.
For things going off-camera, I'm thinking of either having panning or some dynamic zoom to fit the whole level on screen at different angles.
And yeah, I really need a "camera origin" block in the editor.

The rules for completing a level are : all Xs have to be walked on and all dudes have to be no-dot dudes. Dotted dudes can't walk on Xs. Initially I wanted these to be two separate modes but I feel like making Xs and dots interact this way leaves me with a third mode. It should be explained in a clearer way, I agree with that.

The BIG things:
I've been thinking about the "open world" level selector for a while, in a possible rework to simplify UI / menus. While it is more difficult to maintain than a list of levels I feel like it would be pretty neat to walk around with a dude to pick a level. From that it would also make it pretty natural for "tutorial" levels to be gates to areas that require you to understand that mechanic.

Thanks again for the valuable feedback.

Thanks for playing! I've recently reworked the holes and forgot to re-include a check, you're not supposed to be able to land on faces you can't walk out of, good catch.

Thanks for playing!
Do you mean you pressed C in the editor and it didn't delete the block you were on?
I think it's a fair point to have left click select the guys, originally I thought of left click for camera controls and right click for everything else, but I guess this way it would be also easier to tell them to merge.

And yeah, I've yet to bring mouse controls to the editor and keyboard controls everywhere else (Esc to open side menu, R to retry etc)

It's indented but I'm on the fence about this one. I guess I'll try making a few levels with it in mind and see if it feels bad or too counterintuitive.

Thanks for playing! This is all very useful feedback.
The first image might not seem like it but it all worked "correctly", the guy walked on the invisible gap bridge covered by the geometry, but it's true that it looks odd, might have to override the link with the shorter one.

The point about rotation is totally true, the camera has been this way from the beginning when you could only link things on the "up" faces, didn't even think that I could have "full orbital" rotation now.

I must say these levels are kinda thrown together for demoday, but even then they ramp up in difficulty way too fast. I'm working on a way to solve things like the last issue, links should be much smoother soon.

The rest are things that I'll fix over time.

The only thing I don't get is not allowing color crossover, do you mean for perspective links or for "real" links? I might allow them to travel to different colors but only if they "really" touch, not sure yet.

Thanks for playing!
The tutorial button not working was a bug, sorry about that. Alignment is kind of an issue sometimes, but an autosnap is very hard. I think maybe a click and drag on two close faces could work. Thanks for the feedback.

Thanks for playing!
Saw the other comment, probably should have made the tutorial clearer, and perhaps I should include a "show solution" button for it.

Thanks for playing!
I did restrict the camera to never be 0 on the X axis because I don't want "orthogonal" links, perhaps the avoid angle is too wide. As for links leeway, that might be in part because of small screen size (no resolution options yet), but I'll try to increase the grace radius a bit.

Thanks for playing! The video was very useful.
About the rotation hold : I I'll include it in the options, perhaps something like "camera drag : hold/toggle" for left click.

Should have clamped vertical view to less than 90, because that threw you off on the "Oblique" tutorial, where the point was to show that the dudes can meet when on differently oriented faces (and that the dude that is moving absorbs the one that is still).

As for inconsistent links, the small windowed size might make precision aiming harder (too lazy to options menu in time), but I'll try to increase the grace radius for links.

Also there is a level editor, it only shows the button for it when "custom" levels are selected, should probably make that clearer. 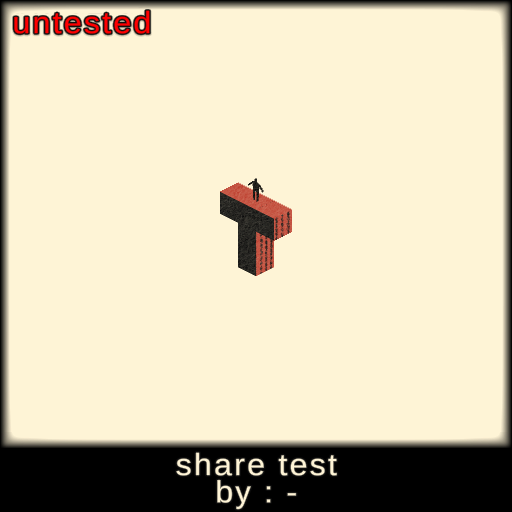 Yeah it's kind of a mess right now and I probably wont be fixing it anytime soon. If you find info buttons and press them they give you "tutorials" on how to do things.

I think that this project is basically scrapped, but I do intend to remake it 2d and text only, maintaining the "physical" aspect of components and stuff.

That first puzzle is meant to show you how to use directional commands, the actual thing that it does at the end is printing 0 (with ' . ').
There are 3 other puzzles, but for those you have to put together a full funge since I forgot to unbork the free one. You can pick and place components that have the "Select" prompt by right clicking on them and then left clicking on a board (the big quads with nothing on them, the components one the first puzzle are unmovable tho). "Select" on sockets connects them instead. Behind the first puzzles there are some buttons that you can press to bring up better explanations.

Thanks for playing, and ye it's not a troll game. I kinda rushed it to be "ready" for demo day but the overall user interface is pretty bad. I think I'm going to can this one anyway, and if I pick it up again I will probably remake it in 2d.

Would it make more sense for the text editor to just be a normal one? Maybe I'm just used to it but I find it nice to use (with Befunge). I guess the smart thing would be making it an option.

Rushed the demo out for the deadline, working on a tutorial right now :p

Whoops, I forgot that was a thing, sorry about that.

Got stuck in the downed state in a corner, otherwise pretty neat. 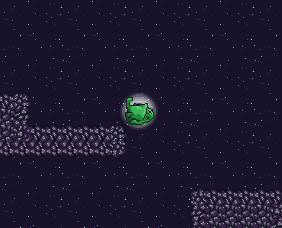 Uuuuh that's weird.Does it happen late in the game or can you cause this in the beginning?

Hey it's been a billion years but I have finally found it, I thought the files had been deleted. Here it is , it's really short but at least you can get closure lol.

Thanks! There's more to come, I intend to make this more metroidvania-y why actual exploration and stuff, and that means abilities and different weapons and also different arenas.

Thanks! When I'll polish and publish the shader and the cube-voxel-to-flat-voxel-conversion script I'll think about it.

I loved DD too but I also wanted some more substantial progression, so here I am. Hopefully this doesn't become some awful perversion of the original simplicity (and hopefully it will stand on its own).

Thanks for checking it out fren!

Someday I'll muster up the will to clean the game up a bit but I fear it won't be soon (a sequel is actually more probable).
Happy to hear you enjoyed it tho, looking forward to the videos!

The ending that was robbed from you was just a short cutscene, I'll send it to you If i find it.

Man that's a shame, unfortunately this is a very old project of mine and I forgot most of its inner workings. Did it say that after building the last pieces of the ship or after the boss?

Thanks for playing frien.
The idea is to have a central elevator / arena where you fight boss / ascension battles, and winning grants you access to the next floor. You can explore the floors to get upgrades and see things. Basically an fps metroidvania kind of thing.

Thanks for playing frien
Level design with free cam should be very possible (see : echochrome lol), and mouse controls are definitely the way to go but I don't think I will take this game much further unless inspiration strikes :^/

Thank for playing frien.
Good thing I threw all that time on shaders then :^)

Yos, I think that with sound disorientation would be mostly fixed, but I plan on having a tatto of sorts on the hand that glows in the direction of the closest enemies or something.

I always forgot there's one less n in the email

Yeah OG voxels are nice and I don't know why more people use them, but it's probably because it's somehow harder to do them with current things. I might be wrong but I think the OG ones aren't even "billboarded" but literally just 2D rectangles and then scaled based on perspective. Really wish there was a different term for "flat" voxels and the "full 3d" ones.

In unity however you can't really tell shaders "draw a rectangle" and everything kinda has to go through a mesh. What I do is I have a script that  first take a voxel object (.vox from MagicaVoxel) and from each voxels I make a quad, so the whole object becomes a mesh made of individual floating quads. The colors get saved into vertex colors and local positions into an UV. Then the shader does the billboarding (by doing some arcane matrix operations with the local positions that I may or may not have hacked together from some forum posts) and coloring.

I think a more "true to the original" way to do this  would be with GL.QUADS but I'm not sure if it worth it.

At some point I'd like to share it all as a package but it's kind of a finicky and arcane process right now and there are a bunch of unused / experimental things floating in the code that might be confusing, but that's the gist of it.

Man that name got me really confused for more than it should have.
Also while I'm working on it the whole game is supposed to be unlocked so WOOOPS uploaded the fix.
Perhaps I should mention the F11+F12 cheat to unlock everything in the main menu.


In any case, thanks for playing frien, glad you like the game.

Oh also I don't know if this is by design or not but not all machines can reach the machine gun rates that I posted, it feels like the 3 way ones, piercers and amplifiers can kinda go nuts while the other ones are rate limited. So maybe limiting the maximum "refresh rate" could help balance things.

Also I don't know what happened but when I started machinegunning balls out some of the buildings sometimes disappeared (some pooling issue?), maybe I missed something in the tutorials?

The game is pretty fun and tactile, I love the sound design.
However I think it's kinda too easy to build a cheese machine like this and then spam amplifiers all over the map. Really like it tho.