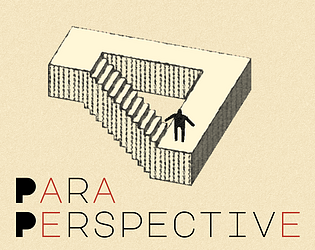 This game is seriously rad! I love the aesthetic with the felt / paper textures. I think the level editor is an awesome feature and its cool that people can share levels they make, which is really impressive to see in an agdg game.

the only things i can find to nitpick about are like, some of the menu functions are arranged in way that could be simpler. idk if I was doing something wrong but I couldn't delete stuff that I placed in the level editor? it also seems kinda random that some things are controlled exclusively with right click, others left click, and others have no click functionality at all. I think it would be more intuitive to select the little guys with left click and give them commands with right click, and have everything in the level editor be able to be done with keyboard commands as well as mouse, so you could use either exclusively.

but, overall, i'm impressed with this! keep it up!

Thanks for playing!
Do you mean you pressed C in the editor and it didn't delete the block you were on?
I think it's a fair point to have left click select the guys, originally I thought of left click for camera controls and right click for everything else, but I guess this way it would be also easier to tell them to merge.

And yeah, I've yet to bring mouse controls to the editor and keyboard controls everywhere else (Esc to open side menu, R to retry etc)

I really like this concept, though it seems like designing levels for it must be thought. My main issues were just some falling glitches and some edges deciding they just did not want to connect, likely to do with the camera rotation being too sensitive.

. zip the folder of the game, not the files, it should be: "game.zip/game/game.exe"
. on hover button effect is extremely slow, whereas the sound is a quick pop, match their speed
. the menus are cute, but disobey the idea of being sewn (?) on: no reason for them to flash or text to "spill over" and the inconsistencies push it from "neat" over into "pretentious" territory
. there's like 6 different font size on the level select screen and it hurts
. I've seen some gifs of it before and still don't know what I'm supposed to do, would be nice to have basic controls / goals on F1 / setup screen
. image below is how I "solved" the first step and it didn't feel intended: x is where the guy stood, arrow is where he ended up by somehow climbing the stairs 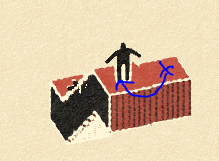 . reset time after falling is way too slow even for the first time, just snap him back to reality, or let me mash R to instantly restart
. I'm having a rough time appreciating the concept when I don't know which perspectives work and which don't, this seems like it's better lined up than the image above, but it's not valid 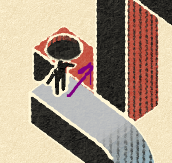 . you're allowing horizontal 360, but not vertical and I have no clue why, more frustration
. the rotation controls are not what I'd expect in general: the camera rotating around the game plane insted of around the screen-up direction when in some cases is just annoying:

. I think this is to do more with holes being introduced on level 2 than the controls themselves, I want to understand what I'm doing before getting thrust into new mechanics
. played around for 20+ min and need a break, my guess is that skipping out on easy (and I mean babby tier from your paraperspective) levels is what's doing the damage
. consider the name "Paraspective" instead

You one mechanical breakthrough away from a 200+ review game at $10 minimum.

Round 2:
. I read the posts below and only now realized there's tutorial levels: it's on me being retarded and playing late, but consider offering other retards like me a "Would you like to play the tutorial?" so they don't autopilot into the main levels like I did
. I didn't get why I couldn't just cross over the "colors"
. it was unclear that you could only switch guys with RMB (tried LMB many times)
. image below not being valid is just ??? 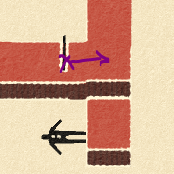 It's a strong base for a strong long-remembered game, keep pushing.

Thanks for playing! This is all very useful feedback.
The first image might not seem like it but it all worked "correctly", the guy walked on the invisible gap bridge covered by the geometry, but it's true that it looks odd, might have to override the link with the shorter one.

The point about rotation is totally true, the camera has been this way from the beginning when you could only link things on the "up" faces, didn't even think that I could have "full orbital" rotation now.

I must say these levels are kinda thrown together for demoday, but even then they ramp up in difficulty way too fast. I'm working on a way to solve things like the last issue, links should be much smoother soon.

The rest are things that I'll fix over time.

The only thing I don't get is not allowing color crossover, do you mean for perspective links or for "real" links? I might allow them to travel to different colors but only if they "really" touch, not sure yet.

I mean crossing over in this level:

It's indented but I'm on the fence about this one. I guess I'll try making a few levels with it in mind and see if it feels bad or too counterintuitive.

I get the idea of not being able to do it, but there seems to be on in-game-world explanation for it, which is what frustrates me. It's a guy who can walk across perspectives, but not across colors (???). You could do something basic like a plasma barrier appearing when he gets near the transition, or the guy recoloring to the color that he is standing on to indicate being bound to it, then revert back to black when falling through.

I couldn't get tutorial to load, when I clicked on play and tutorial. Nothing happened / showed. Included pic of what I see just in case it is wrong. The play box is empty and I just spam clicked tutorial and the up arrow next to it. I am running through a sandbox so that could be the problem.

I had to dial the mouse down 75% (but more when I needed to be more precise) and invert the vertical. Don't know if you are collecting data to see what people mostly use on that.

The hardest part is getting the alignment exactly correct for me. I do get the position but if it is a few pixels out it's annoying. I don't know if possible or if it defeats the game purpose but a snap option / feature when you are in that tiny range would help a lot.

Thanks for playing!
The tutorial button not working was a bug, sorry about that. Alignment is kind of an issue sometimes, but an autosnap is very hard. I think maybe a click and drag on two close faces could work. Thanks for the feedback.

Hey, heads up, I streamed my reaction to the game. You can find the recording here:

Thanks for playing!
Saw the other comment, probably should have made the tutorial clearer, and perhaps I should include a "show solution" button for it.

These puzzles are wicked smart, there are some real creative ones and I had a lotta fun figuring them out.  You go heavy on the red herrings.  Seems all it's really lacking is good BGM.  I do have one QoL improvement I would love to see: I'd like a way to toggle the rotation instead of just clicking & dragging, I probably held down on my mouse a little too long and now my pointer finger's real stiff.  Other than that just the usual gripes everyone is having, sometimes the perspective working out for pathways to works seems arbitrary.

I've attached my playthrough, hopefully it helps!  FOR ANYONE PLANNING TO PLAY DON'T WATCH!

Thanks for playing! The video was very useful.
About the rotation hold : I I'll include it in the options, perhaps something like "camera drag : hold/toggle" for left click.

Should have clamped vertical view to less than 90, because that threw you off on the "Oblique" tutorial, where the point was to show that the dudes can meet when on differently oriented faces (and that the dude that is moving absorbs the one that is still).

As for inconsistent links, the small windowed size might make precision aiming harder (too lazy to options menu in time), but I'll try to increase the grace radius for links.

Also there is a level editor, it only shows the button for it when "custom" levels are selected, should probably make that clearer.

What really threw me off on the oblique tutorial level was that the two dudes on the same plane couldn't meet/the one at the top couldn't meet with the guy on the opposite plane, but that was before I realized I had to merge the dudes in order of how many dots are on their chest.

Amazing presentation! I love the clean presentation and sound effects. The way levels are constructed and deconstructed is just *chefs kiss* I managed to get through the tutorial and opening batch of missions and there were are many neat ideas here already.

One complaint I have is the restrictions on camera movement. There were a few times where it felt like I had a solution but couldn't get it because I wasn't allowed to rotate the camera a certain way. It would be nice if there was a little more leeway in the game recognizing when you've lined stuff up to, but that's probably way too much polish to expect this early on. I also found this really really challenging! But I'm a dummy so that could just be me.

Can't wait to see this when it's finished!

Thanks for playing!
I did restrict the camera to never be 0 on the X axis because I don't want "orthogonal" links, perhaps the avoid angle is too wide. As for links leeway, that might be in part because of small screen size (no resolution options yet), but I'll try to increase the grace radius a bit.

This really reminds me of Monument Valley. Some of the perspectives are weird with the puzzles. Like the one with the yellow, red and blue platforms. I thought I could line the blue and red platforms up so the guy could get on the blue platform and then move him to yellow. The answer is to use the blue platform to hide the gap so the guy pretends there is no gap. This shows how perspectives, in real life and in game, are highly subjective. A game like this needs to have this subjectivity in mind. It's really good, but you need to figure out  way so where having multiple subjective perspectives would work well.

The idea behind this game is interesting, and it has a lot of polish, but I just didn't like it. The perspectives felt more like guessing what the creator was thinking rather than any sort of problem solving where you were able to think outside the box.