PizzaHero: Sea of Garbage
Play as the only piece of pizza thats left!
Flutterru
Platformer
Play in browser

GMTK Game Jam 2019 community · Posted in Reply with Your game and I'll play it!
Flutterru1 year ago (1 edit)

PizzaHero: Sear of Garbage is a one button, physics based, 2D platformer.

If you ever wanted to play as the last piece of pizza left, this game is for you. You can play it directly in the browser, too. 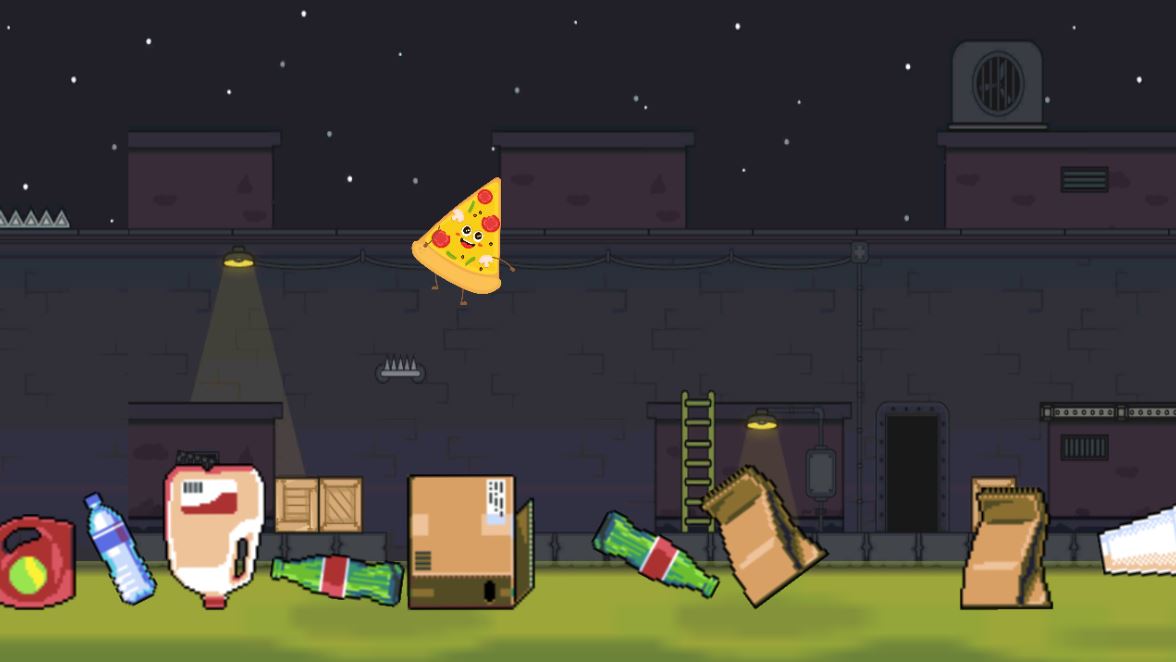 I think some refreshing on the controls and a well thought tutorial would really make the game shine!

I really liked the idea of integrating the path to the boss into the boss fight.

Games like dark souls and hollo wknight do similar things, by letting you walk the way to the boss again and again. However you take this idea one step futher.

Unfortunately I couldnt make it to the top, there were times when i was missing feedback if I was beein attacked or not. Still a neat game!

I really like the main concept. It feels a bit of a fusion between "Superhot" and "Keep Talking and Nobody Explodes", with oldschool rpg gameplay.

The only thing i noticed was that it feld kinda cheap that the whole game is a bout defusing a nuclear warhead and you have to fight a maze of chairs and tables to get there. I would love to see more variety in what stops you getting to the bomb in time, making it even more like a  game about information.

Also got the error using a Windows 10 machine

Combining the idea of a one button game with writting morse code is brilliant!

The controls are on the tedious side, but it sure is creative!

When I saw the jams theme, I fought about making a only one resource type of game, where you have to continously collect your resource again, but decided against it. It feels very nice to see somebody else execute this idea so perfectly!

Using your head to kill multiple enemies at once feels very statisfying, but this game also shows the negatives of seek only AI behavior. Since I wanted to group them together for maximal points, I always ended up sticking towards corners and walls, thus feeling very claustrophobic. I wonder how the game would play, if the area would be infinitely big.

Still awesome twist on the genre and very well executed!

Even though I made the game, I also never come far enough to hear the song fully kicking in. I thought that other web based platformer (like robot unicorn attack) are also fairly difficult for new players, so I didn't want to make it to easy. But maybe some kind of adaptive difficulty curve would be good.

All objects have the same behavior, only the size in colliders is different. During playtesting I already noticed, that sometimes the player gets two jumps instead of one. Im not sure why this happens, maybe there are some invisible collisions happening, that give the player their jump back.

I note the feedback from you and the other commenter about wanting more jump control. Currently the jump range in x and y direction scales linear with the charge time. Their is an minimal and maximal jump lenght. Since the game started out as a runner theres also an invisible wall at abut 2/3 of the screen width. If the player passes this boundry the next jump will only move the player upwards and not forwards. Maybe thats whats causing the lack of control feeling.

Thanks for trying out my game!

I really love the simplistic artstyle, its very cute!

But are you controlling only one Poctoid or all at once :PhlihsophicThinking:
Its a very cool mechanic!

Thanks for letting me know about it, I should probably add some additional effects to the acid, to make it seem more dangerous.

Thank you for your feedback!
Its so cool to see people play my game. Im already thinking about a clever way to implement a charge indicator. Im not sure if a simple bar in the ui would distract to much from the gameplay. Maybe I should add an increasing amount of particle effects to the character to make the charge meter more cohessive to the character.

You probably have a seperate installation of Python 2.7, which causes the problem. See this thread for more information.